In the context of a discussion of the dateline for vegetables, we hear that the Children of Israel brought the omer sacrifice already in the first year that they were in the land:

The assumption here is that it is not possible that the Children of Israel would have eaten the new grain of the land without bringing the omer offering first, as that is the halacha. The verse that the Gemara is building its assumptions on is in the book of Joshua 5:11.

“On the day after the Passover offering, on that very day, they ate of the produce of the country, unleavened bread and parched grain.”

The Gemara questions how could the barley have grown so quickly, after all they were only in the land for five days. The answer, that the land of Israel is called the land of the deer ארץ צבי, and that fruit ripens quickly here, is not fully satisfying but the question provides a good jumping off point for learning about those first few days of the people in the land.

What is the chronology of the entrance to the land? Everything is tied to an explicit date given slightly earlier:

“The people came up from the Jordan on the tenth day of the first month, and encamped at Gilgal on the eastern border of Jericho.” (Joshua 4:19) 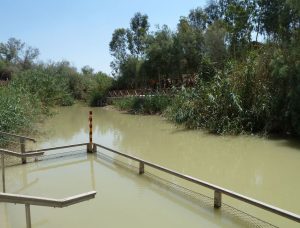 Kasr al Yahud, where the Children of Israel crossed the Jordan (Wikipedia)

As we know from a few pages ago, the first month in the Torah is the month of Nisan. So the date of entrance is the tenth of Nisan, exactly forty years after the beginning of the Exodus. Once we know the date of entering the land,  we can work backwards. This chronology was figured out by the Vilna Gaon and is cited in the Daat Mikra commentary on the book of Joshua:

End of the 30-day mourning period for Moses.

Joshua sends the spies to Jericho

9 Nisan Children of Israel travel from Shittim to Jordan

10 Nisan Children of Israel cross Jordan and enter the land, set up two monuments of twelve stones, one in the Jordan and one in Gilgal and they camp in Gilgal

14 Nisan First Passover celebrated in the land of Israel

16 Nisan Manna stops falling, Children of Israel begin to eat the produce of the land

One of the most fascinating details about this schedule is that the first steps in the land are not military ones. In fact, they are the very last thing an army bent on conquest would do. Instead of choosing the first site to attack, or besieging a city; preparing the troops or sheltering the women and children, the entire fighting force of the nation incapacitates itself! The men, aged forty and under, are all circumcised since they did not practice this mitzvah in the desert:

After the men heal from their operation, the next thing the people do is a big celebration – Passover. Only once all these ritual activities are finished, do we hear about the siege and conquest of Jericho. What is going on here? The entrance into the land is clearly not done in the way that a “normal” nation about to conquer would do. Despite sending clandestine spies, their entry could not have been more public. The entire nation crosses the Jordan together, in miraculous fashion. Perhaps already that day they establish a covenant by Mount Gerizim and Eival. They camp and make themselves vulnerable. The choices made here are ones that show that the main point of coming into the land is to become a nation under God. They cross the Jordan with the Ark of the Covenant leading them. Then their first acts in the land are covenantal ones – having a brit milah and bringing the Passover sacrifice show you are part of the Jewish nation and they are the only positive commandments that you receive karet for violating. By doing these acts, they are showing the other residents of Canaan (as well as themselves) that they are here to serve God, that is the purpose of this conquest. Rabbi Israel Rosenson goes so far as to say that their choice not to do brit milah in the desert was a positive one- they wanted to “save” that renewing of the covenant for their entry into the land.

And what of the omer and eating the produce of the land? It is interesting that the book of Joshua tells us that when they start to eat the land’s produce, the manna stops falling; the two are connected:

Couldn’t they have eaten from the local food while they were still in Arvot Moav, on the other side of the Jordan? That was also settled land and not desert. However, there they still ate miraculously. But now that they have entered the land, the time has come for them to begin to live naturally, albeit with God’s help. So the official end of manna consumption, and the beginning of eating real food must begin after they have entered the land, renewed the covenant, and are ready to embark on the journey of becoming a nation. 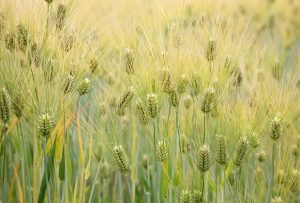