Closing off the seventh chapter of Ketubot, we have a wondrous story on daf 77 which has been retold and embellished many times (more on that later). The star is Rabbi Yehoshua ben Levi, a figure who loved legends and midrash and became something of a legend himself. Before we get into who he was, let’s review the story. Rabbi Yehoshua would teach Torah to those poor people afflicted with raatan, perhaps leprosy. He trusted in the power of Torah to protect him. As a reward, God told the Angel of Death to allow Rabbi Yehoshua to die as he saw fit. Through cleverness (and perhaps the naivete of the Angel of Death), Rabbi Yehoshua not only entered the Garden of Eden while still alive, he was allowed to stay there and he even stole the knife of the deathly angel. While he eventually had to return the knife, he did get to stay in paradise without paying the price of dying, one of very few individuals who merited that reward (Yalkut Shimoni has a list of the others, including Elijah and Serach bat Asher). Who was this amazing individual and why does he get singled out for this honor?

Rabbi Yehoshua ben Levi (RYbL) was a first generation Amora of the Land of Israel. He lived in the first half of the third century CE and was part of the generation on the seam line between the Tannaim and the Amoraim. He repeated many statements from Rabbi Judah the Prince (Rebbe) and seems to have married his son to Rebbe’s daughter (Kiddushin 33b), although it is unclear if he learned with Rebbe directly. His teachers were the great rabbis of Lod, which remained his community for much of his life. He studied with Bar Kapara, a student of Rebbe’s, with Rabbi Elazar HaKappar and with Rabbi Judah ben Pedaya. 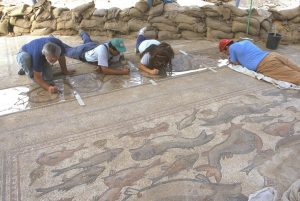 RYbL grew up in Lod and became its community leader. When an escaped criminal endangered the town RYbL convinced him to give himself up and save everyone (Bereshit Rabba 94:9). He was wealthy and also intervened on behalf of the Jews to the Roman officials both in Caesarea and in Rome itself. In Caesarea he and his friend Rabbi Hanina were treated with great honor:

“Rebbi Ḥanina and Rebbi Joshua ben Levi appeared before the proconsul of Caesarea. He saw them and rose before them. They said to him, you get up before these Jews? He said to them, I saw faces of angels.” (Yerushalmi Berachot 5:1)

Perhaps the most defining trait of RYbL was his intense love of Torah. We have already seen how he believed it could protect him from illness. But even more than that, he thought it could cure any troubles at all. If one is alone and afraid or has various illnesses, for any trouble – learn Torah – חש בראשו יעסוק בתורה (Eruvin 54a). Sharing one’s Torah learning was also integral to his worldview. He studied with the sick people but also with his own family. One of the most charming stories about RYbL is about his regular study session with his grandson:

“Rebbi Joshua ben Levi was used to hear the lesson of his grandson every Friday. Once he forgot and went bathing in the public baths of Tiberias; he was leaning on Rebbi Ḥiyya bar Abba’s shoulder. He remembered that he had not heard his grandson’s lesson, turned around and left . . .  Rebbi Ḥiyya bar Abba said to him, did our teacher not teach us “if they started they should not interrupt”? He said to him, Ḥiyya my son, is that unimportant in your eyes? For anyone who hears the lesson from his grandson is as if he heard it from Sinai. “(Yerushalmi Shabbat 1:2)

RYbL gave over laws but he was best known as a baal agada, a master of storytelling and interpreting the text. Among his many brilliant agadot is a series that takes place when Moses ascends to the heavens to receive the Torah. The angels are peeved that God is giving His precious possession to mankind. Rather than answering them, God hands over the job to His star pupil. Moses does not disappoint:

“Moses said before Him: Master of the Universe, the Torah that You are giving me, what is written in it? God said to him: “I am the Lord your God Who brought you out of Egypt from the house of bondage” (Exodus 20:2). Moses said to the angels: Did you descend to Egypt? Were you enslaved to Pharaoh? Why should the Torah be yours? . . . Again Moses asked: What else is written in it? The Holy One, Blessed be He, said to him: “Remember the Shabbat day to sanctify it” (Exodus 20:8). Moses asked the angels: Do you perform labor that you require rest from it?” (Shabbat 88b -89a)

Because of his great piety and learning, RYbL merited regular meetings with Elijah the prophet. In one of these conversations, Rabbi Yehoshua asked when the Messiah will come. Elijah answered him that he should ask him himself; the Messiah sits at the gates of Rome dressed as a beggar. When Rabbi Yehoshua does ask him, he says he will come today. Elijah clarifies: today IF you listen to God! (Sanhedrin 98a)

Knowing all of the above, we are perhaps not surprised that RYbL merits entering paradise alive. The story has so many good twists and turns that it took on a life of its own. Other stories were written based on it and even small books. But the oddest iteration of the story comes from none other than the 19th century American poet, Henry Wadsworth Longfellow (1807-1882). In a collection of travelers’ stories called Tales of a Wayside Inn Longfellow tells the tale of “The Legend of Rabbi Ben Levi.” It was first published in 1863:

“Then fell a sudden shadow on the page,
And lifting up his eyes, grown dim with age,
He saw the Angel of Death before him stand,
Holding a naked sword in his right hand.
Rabbi Ben Levi was a righteous man,
Yet through his veins a chill of terror ran,
With trembling voice he said, “What wilt thou here?”
The Angel answered, “Lo! the time draws near
When thou must die; yet first, by God’s decree,
Whate’er thou askest shall be granted thee.”
Replied the Rabbi, “Let these living eyes
First look upon my place in Paradise.”” 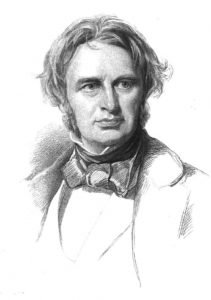 It seems that Longfellow heard the story from a Jew he met called Isaac Edrehi, the son of a Moroccan rabbi. The poem has gotten a new life in recent years as the result of a book that printed it alongside drawings by Avi Katz. Katz in turn was exposed to the story through Mitch Pilcer, a resident of Zippori in the north who in the course of building a swimming pool came upon an ancient grave that had an inscription that said this is the grave of Rabbi Yehoshua ben Levi the Kappar. Pilcer is sure that this is RYbL’s grave and had a pitched battle with the Antiquities Authority for a few years to keep the inscription on his property. In a bizarre twist the Atra Kaddisha, the ultra-Orthodox organization that stops graves from being moved, refused to help him. They said that RYbL never died so how could he have a grave? 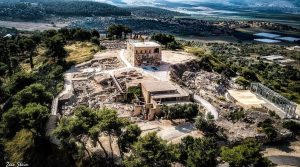 Meanwhile, others are not so sure that this is the same Rabbi Yehoshua. The title HaKappar is never given to RYbL and though he lived in nearby Tiberias towards the end of his life, as far as we know he did not live in Zippori. Meanwhile, in the necropolis in nearby Bet Shearim, three inscriptions do seem to attest to RYbL. One is for a Rabbi Yehoshua, one is for Kira Maga Rabbi Yehoshua ben Levi’s wife and one is for the daughter of Rabbi Yehoshua, זכר צדיקים לברכה, may the memory of the righteous be for a blessing. The fact that the inscriptions are in Hebrew (and not Greek or Aramaic), mention righteous people and are in the home town of Rebbe, someone RYbL was close with and related to, seem to make this a more likely choice than the grave in Zippori. 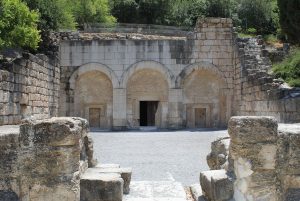 On the other hand, if Rabbi Yehoshua never died and entered the Garden of Eden alive, what difference does it make?