None of Your Beeswax

From the land of milk and honey to the apples and honey of Rosh Hashanah, honey is important in the land of Israel. Honey and beekeeping are referred to in a number of places in the Gemara, including here on our daf, in the context of the myriad discussions about muktzeh that finish up Masechet Betzah:

“One may spread a mat over a beehive on Shabbat to protect it from the elements, in the sun due to the sun, and in the rain due to the rain, provided he does not have the intent to trap” (Betzah 36a)

Beekeeping was common in the ancient world. The Romans usually made their hives from plant material, as did the Jews, usually straw or reeds (Mishnah Ohalot 8:1). We do have an interesting permanent structure for a beehive in Malta (whose name actually derives from the Greek word for honey!): 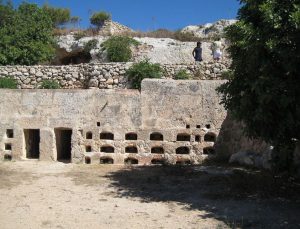 The beehive was a common component of the small farm or courtyard. The Mishnah discusses selling a hive along with the bees (Bava Batra 5:3) and whether the hive is considered to have the status of land or of a tool (Shviit 10:7). Hives are included among the dangerous or unpleasant things that should be kept on the edge of the city, presumably to protect people from being stung (Tosefta Bava Batra 1:9).

Bees should not be given water on Shabbat since they are capable of getting it themselves (Shabbat 24:3), they are an independent species. They do need to have a few honeycombs to stay alive even when the rest of the honey is harvested, as we see on our daf. A fascinating question the Gemara in Bechorot asks is if honey is kosher. Obviously it is, since we know it was eaten in the Bible, but why? Usually anything produced by a non-kosher animal is also not kosher, camel’s milk for example. By since honey is considered to come from flowers and just passes through the bee’s body, it is not included in the category of products of an unclean animal.

All the above refers to beekeeping and honey in Mishnaic and Talmudic times.  But when the Bible talks about honey, what is it referring to?

Honey was a known food and in the laws of sacrifices we learn that it should not be included with the sacrifice. But a more well known occurrence of honey in the Torah is in the famous list of seven special species of the land of Israel in Devarim 8:8:

“a land of wheat and barley, of vines, figs, and pomegranates, a land of olive trees and honey;”

All the species are clearly agricultural products so what is the honey mentioned here? Bee honey would not fit with the other six that all grow from the ground. And indeed this honey is actually another name for dates. Dates were eaten fresh, or dried to last for journeys or when there was no fresh fruit. They were also turned into a great source for a sugar high, date honey, otherwise known as silan. Date honey was always popular in the land of Israel and the Arabs produced it, along with a grape honey known as dibas. 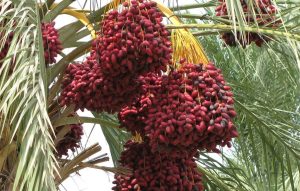 But what about bee honey, does that appear in the Bible? It does, twice, but only referring to wild honey, not domesticated honey. Both stories are rather dramatic. In the first, Samson is walking along when he is attacked by a lion. He effortlessly rips the lion apart and goes on his merry way. A few months later, he passes the same spot and sees that bees have set up a hive inside the lion carcass. This is the source of his riddle to his Philistine in-laws: tell me something sweet that comes out of something strong. This is, in all fairness, a riddle that they could never have solved without seeing the lion.

In the book of Samuel we come upon honey again. Jonathan, King Saul’s son, is hungry after a battle. Despite his father’s vow to not allow any of his soldiers to eat while they were fighting the Philistines, Jonathan sees some honey and eats it. His reaction is a classic one for someone who has just taken in a lot of sugar: his eyes lit up ותאורנה עיניו.

Wild honey actually turns our traditional understanding of a land of milk and honey on its head. An abundance of (goat’s) milk and (wild) honey means that there is plenty of open, uncultivated space for the goats and bees to roam free and lots of fields and wildflowers, not agriculture or houses. It is a sign that the land is in its natural state, not inhabited by the people, so in some ways it is a curse and not a blessing. This is what the prophet Isaiah is referring to when he talks about milk and honey in the wake of the Assyrian invasion:

“And he shall obtain so much milk that he shall eat curds. Thus everyone who is left in the land shall feed on curds and honey. For in that day, every spot where there could stand a thousand vines worth a thousand shekels of silver shall become a wilderness of thornbush and thistle.” (Isaiah 7:22-23)

Since we have no references to domesticated bees and hives in the Bible, scholars thought that they were not raised here. We do have pictures of hives in ancient Egypt but none from the Land of Israel. But in an excavation in the Biblical tel of Rehov in the Bet Shean valley, archaeologist Ami Mazar found not pictures of hives but actual hives from the tenth century BCE! There were thirty intact clay tubes and pieces of over a hundred more, indicating a serious industry. Remains of bees and beeswax were found inside. Nearby there was an altar and other cultic objects, telling us (perhaps) that the honey making had a ritual aspect. (A god for sugar? That’s an idea the modern world could relate to.)

Honey, a great source of calories and taste, cannot exist without bees, and as we are learning today, agriculture needs bees as well. The technology may have changed from Mishnaic times but the product is still just as good. 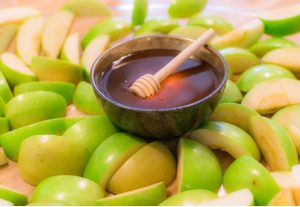