A number of interesting geographical references have come up in the daf over the last few days. Last week we looked at Zedekiah’s Cave, on the same page (61) we have a discussion about the residents of two neighboring cities, Hamat and Gadar. The Gemara tries to understand why Rabbi Judah the Prince permitted Gadar to visit Hamat on Shabbat and not vice versa. Are we dealing with a boundaries issue or something else? What do we know about these two places? 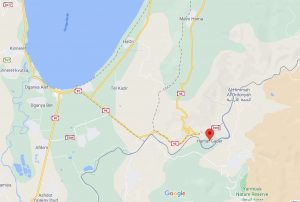 From Roman times, the hot springs at Hamat Gader have been famous. Located on the southeastern corner of the Kinneret, right near the border with Jordan, the hot springs were used for therapy, relaxation and fun. The site was in use from around the second century of the common era up until the eighth, i.e., through Muslim times. The terrible earthquake of 749 put an end to the site but the springs were still known. Between 1948 and 1967 when the Golan was in Syrian hands, Hamat Gader was off limits not only to Israelis but to ordinary Syrians as well. Only real VIPS in the army and the government could get permission to enter this area. One of those VIPs was the Israeli spy Eli Cohen, disguised as a Syrian businessman. Presumably he used this “spa time” to find out Syrian military secrets that he then passed on to Israel. 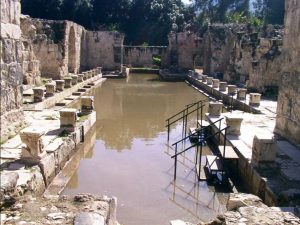 In excavations done at Hamat (not to be confused with the other Hamat nearby, also a place of hot springs, near Tiberias) archaeologists found enormous pools, a theater and of course the springs themselves. They did not find houses at the site but presumably people lived nearby in order to run the spa. There were many inscriptions found at Hamat, including a poem signed by none other than the Byzantine empress Eudocia (fifth century CE), extolling the site. So VIPs were common at Hamat in ancient times as well.

For our purposes, the most intriguing discovery at Hamat Gader was a small synagogue slightly above the hot springs. It is dated to the fifth century but earlier layers were found underneath. It has dedication inscriptions thanking people for donating money to build the synagogue. That isn’t unusual, most synagogues even today have them. What is unusual is that most of the donors came from other places, not  from the local community: Zippori, Kfar Nahum and others. It seems that Hamat Gader had many Jewish visitors and they needed a synagogue, the visitors themselves helped support this effort and were cited for their generosity. 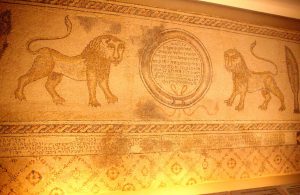 So much for Hamat, a small place with some Jews and a sought after spa. What about Gadar? Gadar, today in the Jordanian town of Um Qais, was on the other side of the Yarmuk River and much higher than Hamat, that is why it says that Rebbe permitted the residents of Gadar to descend to Hamat. Gadar or Gadara, was one of the ten cities of the Decapolis, a loose confederation of Roman cities, most of which on the eastern side of the Jordan, with Bet Shean (on the western side) as the first among equals. There are still remains of a street , a theater, marketplace and basilica. Gadar was an important city and we know of some prominent Greek philosophers and satirists who came from there. In Byzantine times it was the seat of a bishop. 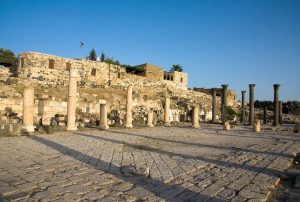 Alongside its non Jewish majority there were some Jews as well and that is where our story comes in. Jews from Gadar wanted to go to Hamat to use the hot springs on Shabbat (an interesting halakhic question in itself, one that is dealt with in Masechet Shabbat). Rebbe permitted the Gadarenes to go to Hamat and not vice versa. Our Gemara attempts to understand this in the context of the halakhic discussion about boundaries and walls but eventually concludes that that is not what is going on here. Rather, Rebbe is trying to solve a social problem rather than a halakhic problem. The people of Gadar were bullies and if some poor Hamat residents were caught in Gadar on a Shabbat, they would be beat up. Why Shabbat? More leisure time plus more alcohol equals fighting. The Gadar residents were confident on their home turf, less so in another city. Rebbe tried to minimize the fighting by keeping the Hamatians in their city, thus protecting them.

Is there a hidden sociological commentary going on here? Were the Jews of Gadar, living as they did among non Jews, used to fighting and thus more belligerent? Were the Jews of Hamat more peaceful because they hosted people from all over at their hot springs? I don’t have the answer but it is fascinating to find the places behind the story.

Another short geographical note: on daf 64 we have a great story about Rabban Gamliel traveling from Akko to Kziv and then on to the ladder of Tyre, סולמה של צור. Just to orient ourselves: we are talking about the northern coast of the Land of Israel. Akko is the well known city. Kziv was a town to the north that we call today Achziv. It was a Phonecian town in Biblical times and later a Roman town with Jews living in it. The ladder of Tyre is what we call today Rosh HaNikra, the massive white cliffs that are a barrier before you get to Lebanon. All three of these places were debatedly outside the halakhic borders of the Land of Israel and while they had Jews living in them, the area was largely Hellenistic. Perhaps that explains why Rabban Gamliel assumed that the bread was left on the road by non Jews and therefore he would not let Rabbi Elai keep it. The distant between Kziv and Rosh HaNikra? A little more than four kilometers, more or less equivalent to three mil as our story tells us. 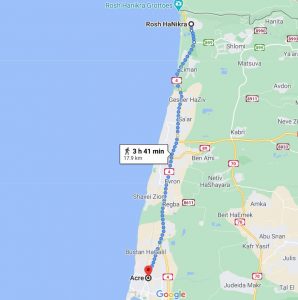