Because of a detail in the Mishnah, the Gemara goes off on a long tangent about nidui, a form of excommunication. The Mishnah informs us that someone who has been released from excommunication may shave and launder on chol hamoed:

Since the person excommunicated was forbidden to shave or cut his hair, he/she had no opportunity to do so before the holiday and therefore is allowed to on chol hamoed. The Gemara then proceeds to discuss if nidui is practiced on the holiday itself  (Moed Katan 14) Finally the process by which one becomes excommunicated is discussed (Moed Katan 16). Here we also hear some stories about rabbis who were put in nidui or imposed it on themselves.

Although our Gemara seems to include many different types of excommunication, by many people, actual banning of individuals by the rabbis was quite rare. Professor Zeev Safrai argues that the most famous and important cases of nidui took place in the Yavne generation, the first generation of Tannaim after the Temple is destroyed. Perhaps more to the point, this was the first generation after the elimination of the sects like the Sadducees and the Essenes, and the first generation when Jews who followed Jesus started to become a force in the world. The rabbis, and particularly the head of the Sanhedrin, needed to encourage unity amongst themselves. This was a complicated endeavor since at the heart of rabbinic discourse lies the freedom to argue, challenge and express minority opinions. The Nasi (patriarch) of the Sanhedrin needed to encourage that freedom while making sure that the Jewish people remained united. The threat of nidui kept the arguments within acceptable bounds and cemented the authority of the Nasi.

The nidui exercised by the early rabbis seems to have served its purpose and discouraged sectarianism. But sometimes there was a price. A very famous and painful story of nidui is the one about Rabbi Eliezer ben Hyrcanos. The student of Rabban Yohanan ben Zakkai, Rabbi Eliezer was famous for  never teaching something he had not heard from his own teachers. When he got into an argument with the other rabbis over a purity question he refused to accept the majority opinion and he was excommunicated. At first glance, the episode seems to be a triumphant story of democracy, majority rule and the ability of people to interpret the law. However, the end is tragic. Rabbi Eliezer, a man with so much to teach, was isolated for the rest of his life. When his students finally came to see him on his deathbed, he lamented that he was like a rolled up Torah that no one has been able to read (Sanhedrin 68a).

How did nidui work in practice? We have some clues from the stories about excommunicated individuals, about how people must distance themselves from them and they cannot join in communal activites. A striking example of what happens to an excommunicated person is related in the context of the architecture of the Temple Mount. If you go to Jerusalem, to the southern wall excavations near the Kotel, you will see a huge staircase. When you stand at the foot of these massive steps excavated after the Six-Day War, you can almost see the pilgrims who came here long ago on the three major holidays. This was the main entrance to the Temple Mount and among the thousands streaming up the steps were probably such luminaries as Hillel, Shammai and Rabban Yohanan ben Zakkai. But after being awestruck, you may simply be struck by a different thought – what did they do about crowd control? The Mishnah in masechet Middot has the answer:

“All who entered the Temple Mount entered by the right and went and went out by the left,” (Middot 2:2)

The Mishnah is discussing  the Hulda Gates, the gates on the southern wall of the Temple Mount. Hulda was a prophet, one of the few female ones, and some say she sat in this area and pronounced judgment and prophecies. However, a more likely origin for the name is the reason you don’t know any little girls named Hulda. The word means rat or mole, a tunneling animal. Anyone who entered the Temple Mount through these gates had to walk through a long underground tunnel before ascending a staircase to the Temple Mount platform. 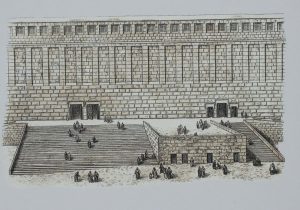 A drawing of the Hulda gates (Wikipedia)

Today we clearly see three closed up gates to the east (the right of the Mishnah) but where are the gates to the west? 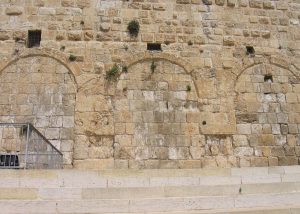 At the western edge of today’s staircase is a massive building, built in medieval times. It covers up the double gates that once stood here, but one small piece of an arch is still visible on the edge. 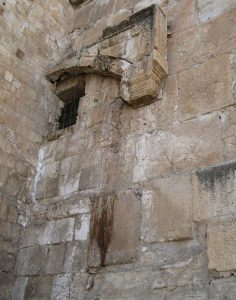 The method of routing the crowd through one entrance and out through another exit is a clever one, still in use today. However, there were exceptions to this rule:

The person in nidui, while allowed to ascend to the Temple Mount, had to be noticed. The Mishnah has two opinions on what is the purpose of this publicity. Either to comfort him: we hope that the rabbis forgive you – or to gently encourage him to repent – we hope that God puts it in your heart to repent. In any case, the idea that everyone in Jerusalem has to know this individual’s status may seem very nosy to us, raised in a world where privacy is important. But the rabbis saw it as an extension of arevut, mutual responsibility. Your sin weighs on me as well, and it is my job to bring you closer to the correct path.