On the Street Where You Live

Welcome to the wonderful world of Eruvin! For the next three months, architects, engineers and urban planners will be very happy. The spatially challenged among us will be less happy but we will manage (talking to myself here). So let’s understand some ground rules about space in Mishnaic times.

Every introduction to Masechet Eruvin talks about four domains/רשויות: private יחיד, public רבים, karmelit and exempt (a place too small, high or low to be halachically significant)מקום פטור. Notice I did not translate karmelit. That is because it is a very abstract concept in the Talmud Bavli, meaning pretty much anything that is not a private or public domain. The original meaning of karmelit is an open field but in the Bavli its meaning greatly expands to become a legal category.

The earlier version of this conversation however, is much more based in real life. The Tosefta (Shabbat 1:1-2) also talks about four domains but they are clearer: private, public, not private or public and semi private that can be made permissible for carrying. Private would mean an enclosed space, public a street or alley open at both ends. The domain that is neither public nor private includes places like a valley, the sea, or a karmelit – an open field. One cannot carry from public to private or vice versa. One cannot carry from either to the third but if you do you are exempt (פטור אבל אסור). But the fourth category is the one that will occupy us for the next while: places that are semi private and with an eruv can be made permissible for carrying. These are a shared courtyard and a dead-end alleyway מבוי שאינו מפולש. Professor Safrai notes how this version fits with other sets of four (think of the four sons of the Haggadah): all good (private) all bad (public) and two in between cases.

Despite the Bavli’s dominance I think it is helpful to see the world the Tosefta way for a while.  It is more real and less abstract and will help us to understand the cases we will come across. It seems that the Tosefta’s version came first and the Bavli created the abstract karmelit category to add new ideas and halakhic solutions.

The next thing to understand are the types of eruv. Today we will discuss eruv hatzerot, the courtyard eruv. Eruv hatzerot is when the inhabitants of a shared courtyard or a shared alleyway want to be able to carry from place to place within the courtyard or the alleyway. In order for such an eruv to work in a courtyard , one needs two components: the courtyard must be physically surrounded by walls and must be owned by one person. The physical component is easy – ancient houses were usually built around a common courtyard, with the houses serving as the walls. This made life easier and more pleasant because the courtyard was used for cooking, laundry and pretty much anything that did not fit in the small, mostly windowless houses. It also provided a social outlet (although your neighbors also knew everything about you, including what you ate for dinner every night). This type of courtyard continued in Jerusalem until the twentieth century and you can still see it in the older neighborhoods like Bet David, pictured below. 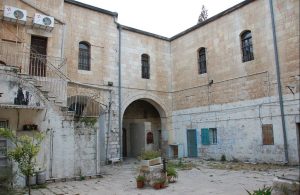 But what about ownership? In earlier days, First and Second Temple, the courtyard was often settled by one extended family and as such could easily be called owned by one family. But by the time of the Mishnah, courtyards were more varied and you often would be sharing them with neighbors, not family. Therefore, you had to create the sense of shared ownership. That is accomplished through shared food (how Jewish), a symbolic way of saying we all break bread together. The actual food, enough for a real meal together, was eventually replaced by really symbolic food, a matzah that was used throughout the year. Here is the eruv hatzerot that is hanging on the wall for all to see in the Ari Ashkenazi synagogue in Tzfat: 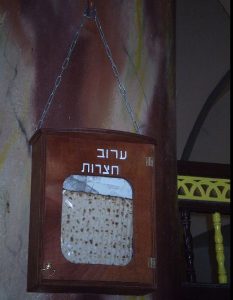 An alleyway can be permissible for carrying with the addition of another element. Because a dead end alleyway מבוי שאינו מפולש still has one open end, the rabbis were worried that people would carry from it to the public domain. Therefore you needed a symbolic doorway or entrance to the alley. This is accomplished through the addition of a לחי, a doorpost added to thicken the entryway, or a קורה, a crossbeam on the top of the entrance, or both, a צורת הפתח. This signals to everyone that you are leaving the public domain and entering a new domain.

And what about in real life? What has archaeology shown us about towns in Israel and these definitions? The towns that have survived more or less intact from the Mishnaic and Talmudic era (as opposed to being rebuilt up until modern times like Jerusalem or Tiberias) have many alleyways, mostly the dead end kind. They lead from the main street directly into the courtyards. We see this in Ein Gedi, in Sussia and in Gamla. Here is a beautiful picture of a מבוי in Sussya. 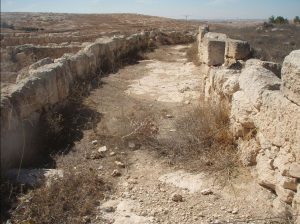 There are also larger boulevards that are not quite public domains (sixteen amot wide) but are clearly larger than just a small alleyway, like the main street in Sussia. This seems to be the מבוי מפולש, the alley open at both ends.

The most exciting discovery on the Eruvin front was a לחי at the entrance to an alleyway in Gamla, one of the proofs that Gamla was a Jewish city in Second Temple times. 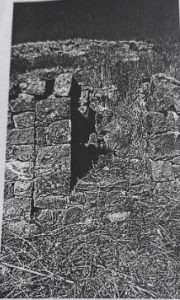 Many more streets, entrances and courtyards to come, stay tuned.

Thank you to Dr. Shira Shmidman for guiding me!