On the Trail of the Sanhedrin

In the final chapter of Rosh Hashanah we start to leave the reality of Temple times, of witnesses coming and being questioned in Jerusalem, and to move into a post-Temple world. We hear about the takkanot, the rulings of Rabban Yochanan ben Zakkai, regarding shofar, lulav and omer. These rulings are meant to address a new reality on the one hand but to keep alive Temple traditions on the other. And since we are spending time in this post Temple world, the Gemara saw fit to list for us two parallel “journeys” – the exile of God’s Presence (Shechina) in stages from the Temple and the stations of the Sanhedrin when it leaves the Chamber of Hewn Stone on the Temple Mount.

“Rav Yehuda bar Idi said that Rabbi Yoḥanan said: The Divine Presence traveled ten journeys , . .  And corresponding to them the Sanhedrin was exiled”(Rosh HaShana 31a)

There is so much to unpack in this statement, not least of which is the juxtaposition, even the comparison of the Shechina and the Sanhedrin. The rabbis take a bold step and put the two side by side. Just as God has to leave the Temple and go into exile, so too do the rabbis! It is really an extraordinary comparison, made even stronger by the fact that while the Shechina is left waiting for Israel to repent, the Sanhedrin continues its business, albeit in different locations. Perhaps this is part of the rabbis’ larger campaign to constantly see the Temple in their Torah study, almost making it a substitute for Temple worship.

One of the last stops of the Shechina’s journey is on the Mount of Olives. In fact, in an alternate version of this statement in Eicha Rabba, the Mount of Olives is the final stop. In the time of the Geonim, Jews were forbidden to ascend to the Temple Mount as it was under Muslim control and instead they would go to the Mount of Olives and pray there, particularly on Sukkot, since the belief was that the Divine Presence was there:

“Since the destruction of the Temple, the people of the land of Israel gather on the Mount of Olives on Hoshana Rabba and encircle it seven times. The first time they face the Temple and say the Hoshana of “Even HaShtiya” [which is about the Temple] and then they complete the whole order. I heard this from Rabbi Zechariah who exiled himself to Jerusalem for atonement and heard the prayers that day on the Mount of Olives.” (11th century Cairo Genizah letter)

In contrast to the Shechina’s journey, which is based on verses, the story of the Sanhedrin is more deeply rooted in history and the stations (outside of Jerusalem) have been identified and some have been excavated:

The stations mirror the story of the Jewish people’s exiles. With the destruction of the Temple,  Rabban Yochanan ben Zakkai reinstituted the Sanhedrin in Yavneh, not far from Jerusalem. However, with the debacle of the Bar Kokhba Revolt and Jews being barred from Jerusalem,  Jewish life largely moved to the north. All the subsequent stations: Usha, Shfaram, Bet Shearim, Zippori and Tiberias are in the north. Why the many moves in those years following Bar Kokhba? Some scholars suggest that the Sanhedrin starts out in the west, under the watchful eye of the Romans in Caesarea and Akko. As Jewish-Roman relations improve (or at least as the Romans begin to ignore the Jews), the Sanhedrin is free to move to more Jewishly dominated areas in the east. In any case, Tiberias, as the Gemara tells us, is the “deepest of all.” This can be taken in a literal sense – Tiberias is topographically low down – or in a more metaphorical sense. Tiberias is where the tradition lands and remains for centuries. The Jerusalem Talmud (a misnomer!) is redacted and completed in Tiberias and great rabbis remain there even after the Talmudic period. In fact, one of the greatest of the medieval rabbis, Maimonides, has his grave in Tiberias even though he never lived there.

In 2017 Israel began an amazing project for its 70th anniversary- the Sanhedrin Trail. The idea was to be able to travel through all the sites (in the north) where the Sanhedrin had been located. Some of these sites, like Bet Shearim and Zippori, have been excavated and well developed as tourist sites. Tiberias is a developed city but its archaeology has been sadly neglected.  Others don’t even have Jews living in them anymore, like Shfaram. The Sanhedrin Trail project was not just about creating a new hiking trail but about exposing all sorts of people to the land, archaeology and Jewish history. The trail and some of the excavations on the way were made by student groups and other volunteers. The goal was to connect them to the story and along the way they created something beautiful. Tiberias’ new archaeological garden was partly developed by students and they are also taking part in the excavations being done at Usha. 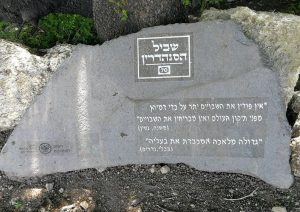 Usha is particularly interesting since it was barely excavated before this project. The name was retained by the Arab village that stood here until 1948. After the War of Independence a kibbutz named Usha was established nearby but the ancient site was not rebuilt. Now in excavating it the students are finding many remains from a Jewish town: mikvehs, oil and wine presses, oil lamps with depictions of menorahs on them. The mikvehs also lead to underground hideout complexes, a sign that the town participated in the Bar Kokhba revolt against the Romans. One of the most intriguing discoveries in Usha is a stone marked with the Greek letters CAB; the suggestion is that this stands for Shabbat and the stone was a boundary stone, showing till where it was permissible for a Jew to walk on Shabbat without leaving the techum Shabbat. 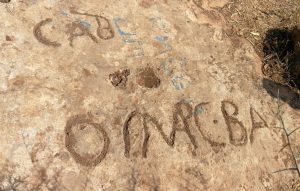 The Sanhedrin Trail is an amazing combination of nature and history and of modern Israel in an encounter with her past. Could the authors of the passage in Rosh HaShanah have imagined that the Jewish people would not only return to the sites of the Sanhedrin but build a thriving Jewish state around them? 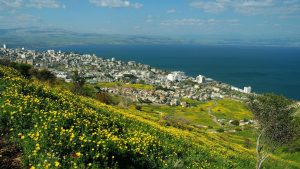