“Had I not lifted the earthenware shard (chaspa) for you, would you have discovered the gem [marganita] beneath it?” (Yevamot 92b)

What Rabbi Yannai is saying is that had I not done the hard preliminary work, you would never have come up with your brilliant insight. A few pages later, the terms are used again, only this time instead of discovering a gem, it is only a shard:

Rav Yehuda said that Rav said: Rabbi Elazar should have taught this verse as a marganita but in fact he taught it as an earthenware shard.” (Yevamot 94a),

Meaning that the verse could have been used to reach a much more important conclusion and it was wasted. What are these two items, חספא or in Hebrew, חרס, pottery, and מרגניתא , and are they connected in some way?

A pottery shard is very simple to explain. Pottery was probably the single most common man-made item for millennia. All you needed was some clay, made from mud, and an ability to shape it into some sort of vessel. Then you left your dish/oven/jar in the sun until it dried to be hard and usable. Later, more sophisticated additions were a potters’ wheel, to help with the shaping, and an oven to fire the pottery so it would be ready faster. 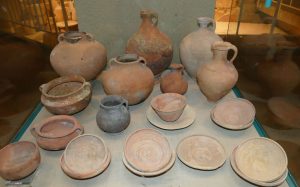 Pottery was accessible to all, even the poorest people. Everyone had at least a few jars or oil lamps to their name. Not only was it cheap, it did not disintegrate or tarnish over time. When Jeremiah is commanded by God to buy land from his cousin to show that Judah will eventually return to its land, he signs and seals the contract and then places it within a clay vessel “so that they may last a long time.” (Jeremiah 32:14)

Because pottery was so ubiquitous, it is very useful for archaeologists. Styles change and if we can identify a type of pottery as belonging to a particular era or ethnicity, the next time we find it, it can help us date the new site. Find enough pottery from enough periods and you can create a “dictionary” of styles and time periods that will help you date a site.

Pottery is also useful in archaeology because with so much broken pottery lying around, a use needed to be found for it. Sometimes it served as fill in the foundations of buildings, helping us to date the buildings. Sometimes small broken pieces were used as writing material. These pieces, known as ostraca, were the backs of envelopes of the old days, perfect for drafting a letter or practicing your alphabet. 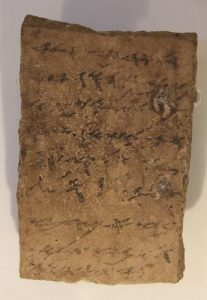 While pottery does not disintegrate, it is inherently fragile and once broken cannot be fixed. In its early stages, before firing, it can be remade and reshaped but once it is hard, a shattered jar can not be put back together to be useful (except for archaeologists). Hence the term כחרס הנשבר, as a broken piece of pottery, as a metaphor for a fragile human life, in the famous UNetaneh Tokef prayer. In Jewish law, pottery, unlike stone, becomes impure when in contact or proximity to death, and unlike other materials it cannot be purified again. So if it became impure, it essentially had to be thrown away.

Cheap and disposable, pottery was an ancient version of our paper goods industry, albeit somewhat more environmentally friendly. It was a common and not valuable, although very useful commodity.

Margaliot or marganiot are pottery’s diametrical opposite. They are mentioned often in the words of the rabbis and are clearly something rare and valuable. When Rabbi Yehoshua hears a nice piece of learning that was said in the bet midrash, he says to the students: you had a good margalit in your hands and you were not going to give it to me? (Hagigah 3a) That is the meaning of the word in our context of Yevamot as well – a valuable insight or thought. But it also can literally mean a precious gem. The most famous margalit in Jewish literature is the one in the story of Yosef Mokir Shabbat, Joseph who values the Shabbat. In this well-known story, a rich man puts all his wealth into a margalit that he sews into his hat, to keep it from falling into the hands of the poor Joseph, who astrologers said will inherit his fortune. But the hat falls into the river and a fish eats the gem. The fish is caught and brought to market but it is late Friday afternoon and the only one willing to spend so much money on a fish is Joseph, who always buys things to honor the Shabbat. When he slices it open, what did he find but a fabulous jewel!

But what kind of jewel is this margalit? It could be a generic word for a precious gem but from the context of several rabbinical statements, it seems to be a pearl, or what is know in Biblical Hebrew as a penina פנינה. The margalit is often mentioned in the context of the sea or the river, like in the Joseph story, and that seems to connect it to pearls, which are created in oysters who live in the sea. The Gemara in Bava Batra (146) mentions putting a margalit inside a drink to dissolve it, for medicinal purposes and we know that people believed that a pearl had health benefits if ingested, and its chemical composition would allow it to be dissolved.

Pearls were valuable and rare but certainly known to our ancestors. The woman of valor has a worth above pearls רחוק מפנינים מכרה. But have we found any real pearls in Israel, not just metaphorical ones? In 2008, in excavations in the Givati parking lot by the City of David in Jerusalem, a beautiful earring was discovered. It was made up of gold, emerald and three pearls and it was found in a layer dating back to Second Temple times. Some lucky woman must have received a pair as a holiday gift and then lost one on her pilgrimage to the city. 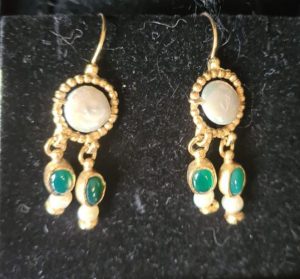 Replica of the earrings (Michelle Levitz)

So is there a connection between the pottery and the pearl? Dr. Moshe Raanan quotes Tosafot, that Rabbi Yannai (or Rabbi Yochanan, who uses the same phrase in Bava Metzia 17b) is referring to large rocks on the ocean floor that look like pottery. When one lifts the rocks, he finds the oyster, with the pearl inside, underneath.  But Dr. Raanan does not like this explanation, since just lifting the rocks will not access the pearl. Rather he sees the pottery and the pearl as two ends of the wealth spectrum. Pottery is common, cheap and unimportant. Pearls are rare, expensive and valuable. But sometimes even lowly pottery has its moment and its use. So too, every person and his or her insights can be valuable, at the right time. 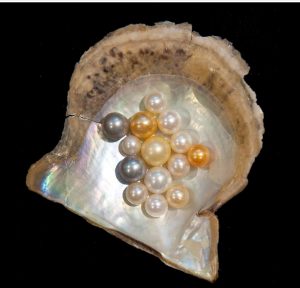