People Who Live in Glass Houses

People Who Live in Glass Houses

These pages contain a discussion about at which historical point glass vessels were considered capable of becoming impure. The earliest option is the time of the zugot, Yosi Ben Yoezer and Yosi Ben Yochanan, 2nd century BCE, then the suggestion is eighty years before the destruction of the Temple (late 1st century BCE) and finally the time of Usha (2nd century CE). We also hear about how glass is similar to and also different from both earthenware and metal vessels. So what do we know about glassmaking?

Glass production started at least five thousand years ago in Mesopotamia. Egypt was an important center for it. As far as we know, glass was not manufactured in the land of Israel but glass objects were imported here. This glass was beautiful but not transparent or even translucent. Glass pieces from the manufacturing process were reused (important for our daf – glass can be fixed, i.e., made into a new vessel). For some reason, glass production stopped in the late Bronze Age (about 3500 years ago). 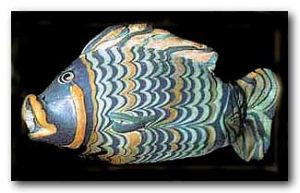 Glass was rediscovered in our area by the Phonecians in the Hellenistic period (4th century BCE) and they eventually developed the technique of glass blowing which made glass cheaper and easier to manufacture. They also figured out how to make translucent glass but it was only the Romans who figured out how to make transparent glass. The lack of see through glass meant that windows rarely had glass in them but rather were just openings in the wall. They were small and high up so as not to let in dirt and animals but only a little light and air. 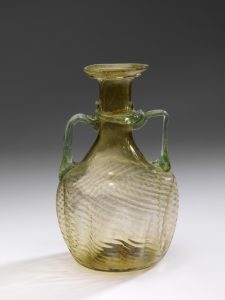 Glass production continued in Tyre and Zidon of Phonecia and it eventually was considered one of the “Jewish” professions there. Benjamin of Tudela (12th century) writes about Jewish glassblowers in Tyre. Eventually Hebron became a glass center as well.

In modern times, Meir Dizengoff was asked by Baron Rothschild to make a glass factory at Tantura (by ancient Dor). The glass was meant to be used for bottles for Rothschild’s wineries in Zikhron Yaakov and Rishon LeZion. However, the sand was not the right kind and the enterprise was eventually abandoned.

The most extraordinary glass find from ancient Israel was discovered by Yigael Yadin in 1961, as part of a daring mission undertaken by the Antiquities Authority to explore caves in the Judean Desert. As part of the mission, Yadin discovered letters written by none other than “Shimon Nasi Yisrael,” Shimon Bar Kokhba. But many less famous but even more moving finds were also uncovered. The caves were used by refugees hiding from the Romans in the time of the Bar Kokhba revolt (2nd century CE). They brought their household possessions with them, including documents, clothing and house keys.

One of the items found was a bundle carefully wrapped in palm fibers. When it was opened, the excavators were astonished to discover three beautiful, perfectly preserved glass dishes. Yadin writes that they were so perfect that he was afraid he would turn one over and see “Made in Japan” stamped on the other side! They had no patina on them since they had not been exposed to humidity and they looked as if they had just been made. Imagine the woman who carefully wrapped them, brought them on her long journey and kept them in the cave with the hope that one day she would go home and use them again. Instead they waited 1800 years to be discovered in the sovereign state of Israel. 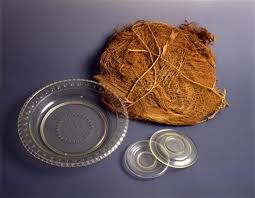