The Mishnah in Eruvin 31a lists various items that one might have thought are off limits for use in an eruv: produce that may or may not have been tithed, maaser sheni produce that has been redeemed and others. Among these items, the Mishna explains that kohanim can use halla, the bread set aside as a gift for them, for an eruv hatzerot. Only kohanim can eat halla, leading us to suspect that the courtyard is inhabited only by kohanim. Is this an example of the Gemara theorizing, as it often does, or a record of actual reality?

Professor Zeev Safrai sees this as a reflection of reality. He explains that there were towns inhabited only or mainly by kohanim, particularly after the destruction of the Second Temple. We have archaeological and literary evidence of these priestly towns and this is a good place to explore them.

The  Bible in Divrei HaYamim 24 explains that King David divided the descendants of Aaron the priest into twenty four divisions, or mishmarot in the language of the rabbis. They are named there: Yehoyariv, Yedaiah, Harim, etc. The rabbis continue the idea and explain that each division would serve in the Temple for two separate weeks a year. That leaves us with only forty eight weeks. It seems that this was on purpose, so that no watch would serve the same weeks every year. It was obviously harder but more lucrative to serve during festival weeks, so it would be unfair to have the same schedule every year.

While the Temple was standing, it seems that the priests lived all over, and probably close to Jerusalem. But once the Temple was destroyed, and even more so after the Bar Kokhba Revolt when Jews were barred from Jerusalem, priests like the rest of the people largely moved north. The twist was that they stayed together. We have a few hints in Rabbinic literature and more fleshed out information elsewhere that says that each mishmar lived together in a particular town. This was for a number of reasons. First, priests together could be more careful about ritual purity as well as family connections, making sure to marry into other priestly families. Second, by staying together they could continue to recall the traditions connected to the Temple, so that when it was rebuilt they would be ready.

Before we get to the towns of the mishmarot in the north, a different site also offers a tantalizing glimpse of a kohen dominated area. Excavations done in the Southern Hebron Hills, and particularly in Sussya, show some strange anomalies compared to other towns of the time. These communities, living a few centuries after the Temple was destroyed, placed a great emphasis on Temple related images and behavior. For example, in Sussya archaeologists have found thirty-five mikvaot, showing that a high priority was placed on ritual purity. Many decorations include a menorah and the synagogue in Sussya is oriented east to west, just like the Temple. Sussya is also the only place where the names on the inscriptions include the name Kohen: Issi haKohen , Yochanan haKohen. Was this area settled by kohanim loath to move too far away from Jerusalem, lest the Temple be rebuilt and they would not be nearby? Archaeologists who dug there support this theory. 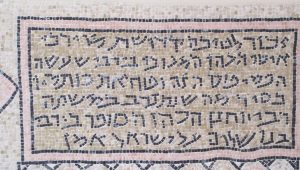 Like all piyutim, there is much word play and coded references and the last word of each line is the name of a town. The towns include some very famous ones: Arbel, Yodfat, Nazareth, Migdal, all towns that were well known in Second Temple times and afterwards. They are all in the Galilee. Here is Safrai’s map of the locations:

Perhaps more astounding than the literary evidence is the archaeological evidence. In a few places: Caesarea,Nazareth, Rehov – we find fragments of inscriptions with the mishmarot and their towns. Here is the reconstructed one from Caesarea: 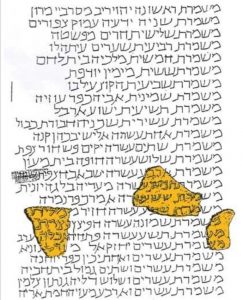 The furthest and most complete one was found in a mosque in Yemen(!) where it was in secondary use. 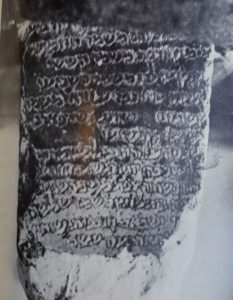 Why would there be inscriptions like these? It seems that Byzantine period Jews put this list up on their synagogue walls and some even recited special piyyutim for that week’s watch. This is an extraordinary  sign of the Jewish devotion to the Temple and how the yearning for the return continued throughout the centuries.

Rabbi Moshe Bassoula of Tzfat wrote in the 16th century about the town of Kfar Hananiah, not far from Tzfat. This is one of the towns mentioned in the inscriptions.  He told of how the people of the town are mostly kohanim, 1500 years after the destruction of the Temple.  And in a much more far flung variation of our story, the Jewish community of Djerba in Tunisia is known as the city of kohanim. The community, which traces its origins back to First Temple times, has an incredibly high percentage of kohanim. They claim that their great synagogue, al Ghriba, has stones from the Temple incorporated into it. 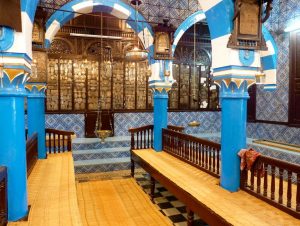 מהרה יבנה המקדש, May the Temple be rebuilt speedily and the kohanim return to their watches!