The Mishnah on daf 79 talks about a fascinating situation. If most of the community is ritually impure, the Passover sacrifice can be brought in a state of impurity. This seems to contradict so much of what we understand about the sanctity of the Temple and the sacrifices. However, there is an overriding concept of the ציבור, the community, that takes precedence for certain sacrifices. About a month ago we also heard about a different radical action, taken by a king, to change the Passover as well. This is when King Hezekiah added another month to the year and thus celebrated Passover a month later than the original calendar had said (56a). How are these ideas related and what is the original story of King Hezekiah?

King Hezekiah, who rules over Judah in the turbulent late 8th century (720 or so), comes to power after a long reign by his father Ahaz. While Ahaz was not the worst of the kings of Judah and Israel (there is quite a competition), he clearly fills the land and the Temple with idolatry. This legacy is still there when his son, Hezekiah, a righteous and God-fearing man, comes to power. Hezekiah immediately sets out to rid the land and especially the Temple, of idols. In the second book of Chronicles (29), in his first act as king, he gathers the Levites and Kohanim and asks them to help him get rid of the impurity in the Temple. They agree and begin the work on the first day of the month of Nisan. It takes them 8 days to physically get the idolatry out of the House and then another eight to purify the vessels of the Temple, as well as to purify themselves. This brings us to the sixteenth of Nisan, two days after the Passover sacrifice should have been brought. Passover has literally been passed over. 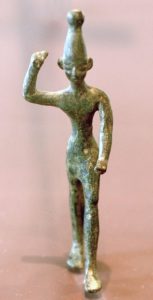 Hezekiah continues with his reform and brings many sacrifices, dedicating the Temple anew. Among these sacrifices are thanksgiving offerings which come with bread לחמי תודה. This is another example that Hezekiah does not consider Passover to be celebrated at this point – the week of the 16th of Nisan is Pesach and here they are eating chametz! Since Passover still has not been celebrated, Hezekiah consults with his advisors and they decide to do Passover a month late, in the second month of the year. This is what the Sages call עיבר ניסן בניסן and what they are displeased about. It is permitted to add another month to the year, in case the weather is still cold and it will not be spring by Nisan, but that can only be done up until Adar, not already in the month of Nisan. However, it seems Hezekiah goes ahead and does it anyway. 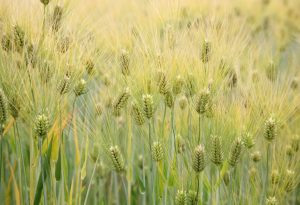 Has the barley ripened yet? If not, Nisan may have to be pushed off (Wikipedia)

But perhaps he doesn’t? The Biblical text does not say he changes the calendar, only that they decide to do the Passover in the second month. Perhaps he is merely telling the people to celebrate Pesach Sheni, the makeup date for the sacrifice for those who were impure? Here is where we come up against our Gemara. If the whole community was impure, Hezekiah could have celebrated the real Pesach on the correct date (assuming the Temple was ready).

It also seems clear that what is written about here is NOT Pesach Sheni. Pesach Sheni has its own set of rules: it is only for one day, you don’t have to get rid of matza, etc. Also, the idea is that even though you were impure on the first Passover, by this “do-over” you have become pure. In our story, what is happening does not follow those rules. Hezekiah’s Passover is celebrated for the full seven days and not just for one, and perhaps more significantly, the people are not purified – they are still impure!

For most of the people—many from Ephraim and Manasseh, Issachar and Zebulun—had not purified themselves, yet they ate the paschal sacrifice in violation of what was written. Hezekiah prayed for them, saying, “The good LORD will provide atonement for (Chronicles II 30: 18)

So we have here a case of Passover being celebrated a month late, but it is a real Passover, not Pesach Sheni. In that case, this could be following our Mishnah:  most of the people are impure and therefore טומאה הותרה בציבור, impurity is permitted if the majority are impure. However, Hezekiah prays for forgiveness so it seems unclear if he did the right thing. Hezekiah breaks the rules but seems to be doing it for a greater cause – to bring the people back to God’s worship.

There may be a parallel to our Mishnah here. Safrai in Mishnat Eretz Yisrael explains that the idea that most of the people in Jerusalem would be impure is not a hypothetical concept. The holidays were fraught times, with tension between the Jews and the Roman soldiers. If that tension escalated into violence, many dead bodies would be lying around and many people would be impure. Yet the holiday and the temple could not be forgotten. Perhaps this is the logic behind the rabbis’ enactment, as it was behind Hezekiah’s rule breaking.

Rabbi Yoel Ben Nun gives a different, fascinating explanation. First, he separates between the purification of the Temple and the Passover. He says the first does happen at the beginning of Hezekiah’s reign but the second only happens years later, when the Kingdom of Israel has fallen to Assyria. At that point Hezekiah is crowned again, as king of both the north and the south. He wants to unite the people (whoever is left in the north) and so he calls for them to come together in Jerusalem to celebrate the Passover. Most people mock him but some come. In order to accommodate them, he changes the calendar. Centuries earlier, with the first king of Israel, Jeroboam, the calendar had been changed. Israel added a month and celebrated Sukkot in the eighth and not the seventh month (Kings I 12:32). This separated Israel and Judah even further, because now Israel was on “Israel time,” celebrating the holidays a month off. Hezekiah adds the month so as to bring them back in sync again. By doing that, his Passover is as much a national revival as a religious revival. 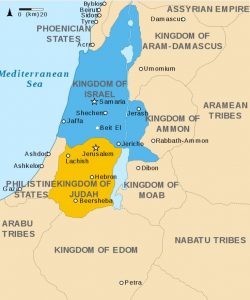