Masechet Shabbat has begun and with it a whole slew of new and complex concepts. We are talking about the reshuyot, the different areas where life is conducted. The most accessible to us are the public – reshut harabbim – and the private- reshut hayachid. But within those two as well as in addition are many other concepts. It may be helpful to examine some of the terms the Gemara uses and see what they looked like in the ancient world.

What is a reshut harabbim asks our daf.  The answers: a סרטיא  seratia and a פלטיא  plateia, as well as thoroughfares that are open at both ends מבואות מפולשין . The open thoroughfare is easy enough to understand and if you have been to the ancient site of Susya in the southern Hebron Hills you have seen such a main street, with the passageways to courtyards branching off of it: 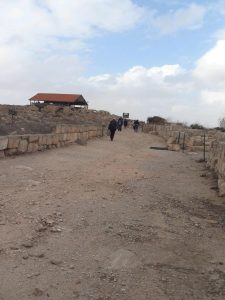 But what of the other two terms? Rashi explains a סרטיא  as a highway: a road that leads from one city to another. The word seratia itself is a corruption of the Latin word stratos or street in English. A famous example of a stratos in Jerusalem is the place called the Lithostratos (literally paved street) in the Muslim Quarter. This street with massive paving stones was built by the emperor Hadrian in the second century CE after Jerusalem had been turned into the Roman pagan city Aelia Capitolina. Today it is far underground, in the basement of the Sisters of Zion convent. Some Christians misdate it to a century earlier and see it as the street where Pontius Pilate brings Jesus after he is condemned to death.  In any case, it is a large and impressive street, something befitting a reshut harabim. 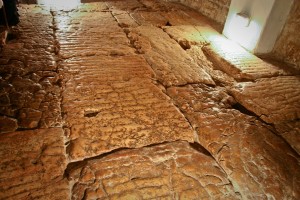 We could also give the Cardo as an example of a סרטיא : 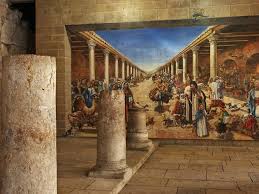 A פלטיא  plateia according to Rashi is a commercial square in the center of town. Plateia is a Greek word meaning plaza or town square.  In Roman times this type of plaza was called a forum. Hadrian built these in Jerusalem as well and a main one is adjacent to the Lithostatos, built over a Herodian pool. It even has an ancient gameboard etched into it. telling us that there were plenty of bored soldiers or shopkeepers biding their time here. 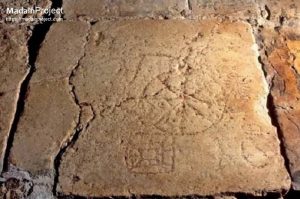 Two more terms our daf uses are סטיו  and  צדי רשות הרבים, intermediary spaces that are not really public or private. A סטיו  is the Greek stoa, a covered row of columns, usually near a commercial area. Herod built what is known as the royal stoa on the Temple Mount, separate from the enclosed holy area. 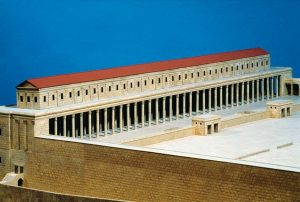 צדי רשות הרבים, literally the sides of the main road, seem to refer to an area that is between public and private property. According to Rabbi Eliezer on our daf, if this area is defined by חיפופי, small columns, it is a separate entity, neither public or private.

To bring us into the modern age, perhaps these חיפופי could be similar to the yellow lines the municipality has drawn in Mahane Yehuda market to delineate up to where bar owners may put their tables?