Shekalim 2: It’s Time for the Appeal: Funding the Temple (Introduction to Masekhet Shekalim)

What makes Shekalim different? Note that the Gemara on these mishnayot is Talmud Yerushalmi, the so-called Palestinian Talmud. Why is it here? Also, the content of Shekalim makes its placement in Seder Moed incongruous, at least at first read. || Opening with the proclamation for people to contribute their shekalim (half shekel) to the Beit HaMikdash, for upkeep, repair, public welfare, and even communal sacrifice. Also, why this contribution was collected when it was? Plus: Breaking down reading Megillat Esther on the 15th, for the walked cities, with different content and language than we know from the Bavli, as commentary on the mishnah. Note that we don’t do the Adar mitzvot in the leap month of Adar I, but only Adar II. Also, were the people on the cities supposed to read Megillat Esther for two days? 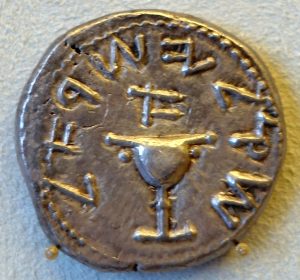 Ancient shekel coin c.66-67 CE, of the type used during the First Jewish Revolt against Rome.
Exhibit in the Bode-Museum, Berlin, Germany. Public domain – photography was permitted in the museum without restriction. (Wikipedia)

Click here for the Talking Talmud podcast on Shekalim Daf 2.

To listen: Click the link above. Or subscribe wherever you get your podcasts. Or join the Talking Talmud WhatsApp group, and receive the link as soon as it goes up.