On our daf (Yevamot 86b) we learn that the Levites, who are supposed to receive the ma’aser, the ten percent tithe on produce, lost that right to the Kohanim in the time of Ezra. The reason? They did not come to Israel en masse in the Return to Zion. What do we know about the Levites in history?

The Levites are descended from Jacob’s third son, Levi. Levi is often paired with his brother Simon in the stories in Bereshit. They are both children of Jacob through Leah, the most fruitful of Jacob’s wives, and they both seem to be hotheads. They are at the forefront of the brothers’ attack on the city of Shechem, in revenge for the rape of Dina their sister:

“ On the third day, when they were in pain, Simeon and Levi, two of Jacob’s sons, brothers of Dinah, took each his sword, came upon the city unmolested, and slew all the males.” (Bereshit 34:25)

When Jacob gives blessings to his children at the end of his life, Simon and Levi get a dubious “blessing,” ending with a promise to split them up so that they will cause no more trouble together:

“Simeon and Levi are a pair;
Their weapons are tools of lawlessness.. .

Cursed be their anger so fierce,
And their wrath so relentless.
I will divide them in Jacob,
Scatter them in Israel.”  (Bereshit 49:5, 7) 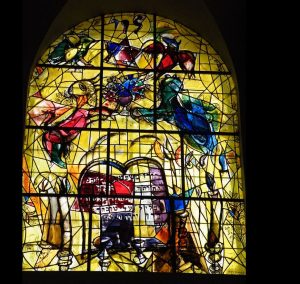 As the sons become tribes, they take different directions. While Simon continues down the road of anger and disobedience, as the head of his tribe publicly sins with a Midianite woman (Bamidbar 25:14) the tribe of Levi redeem themselves by helping Moses get rid of the sinners in the incident of the Golden Calf. In return for that act, their tribe becomes the ones who serve in the Tabernacle, and later in the Temple. They replace the firstborn sons who were supposed to serve. A democracy is replaced by a meritocracy, at least in the beginning. A smaller subset of the Levites are the sons of Aaron, who become the Kohanim, the priests who perform a higher level of Temple service.

When the tribes enter the land, we see that Jacob’s prediction is fulfilled, albeit in very different ways. Simon gets a small inheritance in the land of Israel and is eventually swallowed up by the tribe of Judah. His “dispersal” is through having to wander within the land of Judah, never having a real permanent home. Levi on the other hand gets no real inheritance. Their tribe is scattered through the land, just like Jacob promised. But the dispersal is so that they can teach and influence the people and not be concentrated in one place. Forty-eight cities in the Land of Israel were allocated as Levitical cities. This included cities for the Kohanim  and cities that also functioned as Cities of Refuge, ערי מקלט. Some of the more famous ones are Hebron, Shechem, Bet Shemesh and Yokneam. 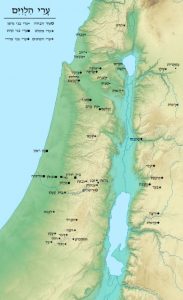 The Levites had specific jobs in the Temple. They did not deal with the sacrifices – that was the job of the Kohanim. However, besides doing a lot of the heavy lifting (literally, they opened the gates and carried the furniture), they also were the musicians of the Temple. They played instruments and sang songs. In the Temple, the singers stood on the fifteen steps that separated the Women’s Court from the Azara and sang, Those steps are called maalot and that is why we have Songs of the Steps, Shir LaMaalot. Every day had its own song, the psalm of the day, שיר של יום. Today, to remember the Levite song, we add that chapter at the end of our own morning prayers.

A mosaic of the Levites’ instruments, located in the Akko synagogue (Wikipedia)

Whether you were chosen to be a singer or a shlepper depended on your degree of musical skill. Famously, when Rabbi Yehoshua, a Tanna who was also a Levi, went to close the gates of the Temple, he was admonished by a fellow Levi: Yehoshua, you are from the singers (משוררים) and not the gatekeepers (שוערים) (Arachin 11b)

Not all Levites did the right thing and served in the Temple. The book of Judges tells a story of a Levite who was lured by the excitement of having his very own temple. He had already become a priest for a local temple set up by someone named Micah, but then he got an even better offer:

“while those men entered Micah’s house and took the sculptured image, the molten image, the ephod, and the household gods The priest said to them, “What are you doing?” But they said to him, “Be quiet; put your hand on your mouth! Come with us and be our father and priest. Would you rather be priest to one man’s household or be priest to a tribe and clan in Israel?” The priest was delighted. He took the ephod, the household gods, and the sculptured image, and he joined the people.” (Judges 18:18-20)

Being a priest for hire, rather than just a second fiddle to the Kohanim must have appealed to more than one Levite and there were plenty of local temples looking for staff in Biblical times.

Then the real Temple is destroyed and the people go into exile. Years later, Ezra calls on them to return. But he is sorely disappointed by the number of Levites who show up, as our Gemara tells us:

“And from where do we derive that the Levites did not ascend in the days of Ezra? As it is written: “And I gathered them together to the river that runs to Ahava; and we encamped there for three days; and I viewed the people, and the priests, and found there none of the sons of Levi” (Ezra 8:15).” (Yevamot 86b)

If we look a few chapters earlier, in the tally that Ezra makes of the returnees (2:40) we see that the numbers of the Levites are very low. At the river, Ezra puts in an “emergency call” to bring more skilled Levites. But why are there no Levites already in the group? Rashi (in Kiddushin 69) and Tosafot (on our page in Yevamot) bring a strange midrash. They say that the Levites who participated in the Return to Zion had all cut off their thumbs and could no longer play their instruments. When the Babylonians said to them sing us the songs of Zion, these Levites meant it literally when they said how can we sing the Lord’s song – they were physically unable to.   Because of that noble attempt to keep holy song from the polluted land of Babylonia, now they were disqualified to play in the Temple and so Ezra needed new, whole Levites. Perhaps this midrash exemplifies the tragedy of the destruction even in the midst of the rebuilding of Zion.

Today Levites have lost much of their special role. Although they are often distinguished by their names and do get the honor of being called second to the Torah, otherwise they are like all other Jews.  But one day we will return to the Temple and the Levites will return to their songs, as we say in the Musaf service on holidays: ולוןים לשירם ולזמרם.