Songs in the Attic

In discussing what do people mean when they say certain words, our Mishna (Nedarim 56) brings up the case of terminology for a house. Someone who vows not to enter the house – does a house include the aliya, i.e., the loft? Let’s use this question to discuss what houses looked like in the times of the Mishna in the Land of Israel.

Unless you were very rich, your house in ancient times was pretty simple. It included a large room, today we would call it a multi-purpose room, for eating, entertaining and sleeping. Perhaps there was a storage room and a small indoor kitchen. Much of the house’s activity – cooking, laundry, socializing – took place outdoors in the courtyard whenever possible. But what was the loft used for? 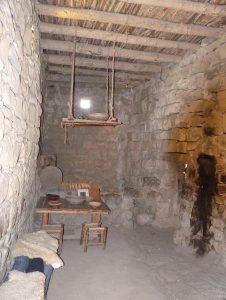 Reconstruction of a multi-purpose room in Katzrin (Wikipedia)

We hear about a loft in the Bible story about Elisha the prophet. He would stop and stay occasionally at the house of a wealthy woman in Shunem. One day she suggested to her husband:

“Let us make a small enclosed upper chamber (aliya) and place a bed, a table, a chair, and a lampstand there for him, so that he can stop there whenever he comes to us.” (Kings II 4:10)

The idea seems to be that Elisha will have his own private space. And indeed when he has to save the woman’s child by resurrecting him, he does it in this small and closed room. Presumably miracles like bringing someone back to life are not meant for the eyes of the public. 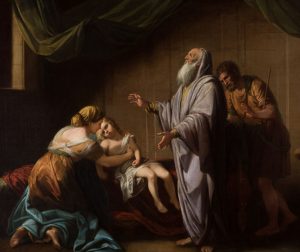 Elisha resurrecting the child in his room by Benjamin West (Wikipedia)

In the Mishna the loft is mentioned often. Professor Zeev Safrai in his Mishnat Eretz Yisrael explains that the fundamental question that we are dealing with, whether the issue is vows, money or purity, is whether the house and the loft constitute one space or two. If it is considered one, then the vow on a house includes the loft and impurity in the house will also make the loft impure since it is all the same area. This seems to be the prevailing opinion. But Safrai also brings examples where it seems that the loft and the house were occupied by two different people and presumably were considered separate entities:

So a loft can be an integral part of one family’s house or it can be separated from the house and rented out. In any case, it does provide some privacy merely by being on a separate floor from the rest of the dwelling. In fact, the loft, as well as the roof of a house, were two of the few private spaces in ancient times. Most people lived in crowded homes with children and grandparents and nosy neighbors next door in the courtyard. But Judaism insists on privacy for a married couple and it seems that the loft may have served that purpose. It also seems to have been a place where you go for secret meetings as in the famous story of the loft in Nitza’s house in Lod:

“The Sages counted the votes of those assembled and concluded in the loft of the house of Nitza in the city of Lod: With regard to all other transgressions in the Torah, if a person is told: Transgress this prohibition and you will not be killed, he may transgress that prohibition and not be killed except for those of idol worship, forbidden sexual relations, and bloodshed.” (Sanhedrin 74a)

This meeting seems to have been held at the time of Roman persecution and therefore needed to be held secretly. The same setting is mentioned for another important Rabbinic discussion:

“Rabbi Tarfon and the Elders were reclining in the loft of the house of Nitza in Lod, when this question was asked of them: Is study greater or is action greater?” (Kiddushin 40b) 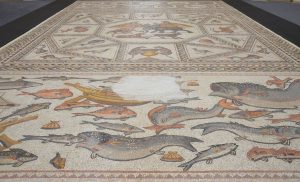 In periods when secrecy was less important, the loft could still be useful for providing a special place for a visitor. The midrash in Derech Eretz Rabba relates that a guest came to Rabbi Joshua’s house. He was given an honored place in the only private room in the house, the loft. But was it only to honor him?

“Once a man came to Rabbi Joshua’s house. He fed him and gave him the loft room to sleep in, removing the ladder afterwards. . . In the middle of the night [the guest] took the dishes and put them in his cloak and when he tried to go down he fell from the loft and broke his neck . . .”  (Derekh Eretz Rabba 5b)

A room that can only be accessed by a ladder can be private but can also be a prison. In this case, Rabbi Joshua suspected  his guest’s honesty and wanted to prevent him leaving with any “parting gifts.”

Sometimes the ladder can also be used to keep away predators who want to enter, not those who want to leave:

“Those captive women who were brought to Neharde’a, where they were redeemed, were brought up to the house of Rav Amram the Pious. They removed the ladder from before them. . . (Kiddushin 81a)

A wonderful place to see how ancient houses really looked is the Talmudic village of Katzrin, in the Golan. Here an ancient town was really discovered and excavated but then the park went one better: they built a replica of a house, complete with a courtyard, main room (traklin), small kitchen and a loft. The loft can only be accessed by a ladder and provides privacy (as well as a fun place for kids to climb up and hide from their parents). 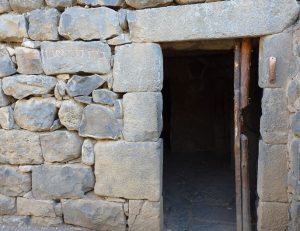 “Rabbi Abun’s house” in the Talmudic Village in Katzrin (Wikipedia)

Did you have an attic room in your house? What treasures did it hold?