One of the odd side effects of this pandemic has been an incredible interest in baking. Not just regular chocolate chip cookies though, but bread, and specifically sourdough bread. The way this bread is made with a sourdough starter, an item that is at the heart of the story of getting rid of hametz. So let’s start off Masechet Pesachim with that item we fear most on Passover: leaven.

The Torah instructs us as to what is forbidden during the week of Passover:

Seven days you shall eat unleavened bread; on the very first day you shall remove leaven from your houses, for whoever eats leavened bread from the first day to the seventh day, that person shall be cut off from Israel. (Shmot 12:15)

Here we see a distinction between two items: leaven שאור and leavened bread חמץ. A few verses later we have an additional word, מחמצת:

No leaven shall be found in your houses for seven days. For whoever eats what is leavened, that person shall be cut off from the community of Israel, whether he is a stranger or a citizen of the country.(Shmot 12:19)

What is the difference between leaven and leavened bread? And why are they forbidden on Passover? Chametz, bread, is a familiar product. According to the Gemara it is made of one of the five major species of grain (wheat, barley, rye, emmer wheat and oats). These grains have gluten and naturally will rise if left long enough. Interestingly, these are also the only grains you can use for matza. Matza needs to have the potential to rise even if you don’t allow it to rise. 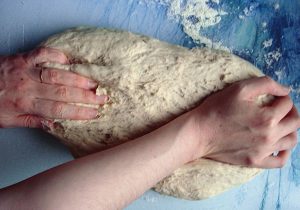 Thousands of years ago, perhaps in Egypt, someone figured out a better way to make bread, probably by accident. If you kept a small piece of dough from the day before and added it to your new dough, it would make your new dough rise faster. This is the leaven שאור, or what we call the starter. The starter would be kept and “fed” regularly, enabling the baker to keep on making bread. Without it, you were back to the old primitive ways.

On Pesach you cannot keep either bread or starter. The difference between them is understood through a few halachic disagreements. Bet Shammai and Bet Hillel argue over how much bread versus how much starter is Biblically forbidden. Bet Shammai says you can keep a larger amount of bread but even a small amount of starter is forbidden since it can be used to make more bread, Bet Hillel says the same amount (an olive size) is forbidden with each. The Raavad adds in a similar vein that while hametz unfit for a dog’s consumption is permitted in your house on Pesach, seor is still forbidden since even if a dog won’t eat it, it can be used to make something edible. 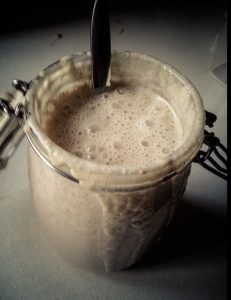 But here’s the catch: unlike today when we have so many products that will last just fine for a week, in ancient Israel bread is basically useless after a day and they had no dried pasta, cereal, etc. So the ONLY thing you want to save is the starter, which is very valuable. Bakers keep starters for years and in some cases centuries. They keep improving as time passes. Besides that, how will you make bread again after the holiday is over? And in fact, the Mishnah (2:2) even allows one to take starter from a non Jew right after Pesach because otherwise you would have to wait too long to make your bread:

Chametz which belongs to a gentile over which Pesach has passed is permitted for benefit (Mishnah Pesachim 2:2)

Giving up your starter was a sacrifice for the baker but it ties in to the essential message of the Passover story. We don’t know if the ancient Egyptians invented leavened bread but it was very important to them. In an excavation done in a work complex near the Sphinx, the Lost City, the archaeologists found huge numbers of bread molds, grain silos, flour grinders and hearths to bake on. Keeping the large slave economy going with bread and beer was critical. 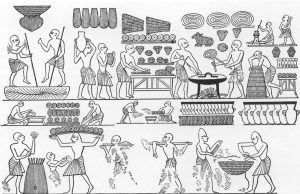 However, bread did not just fuel Egypt’s economy and military. It was also holy to them and symbolized their powerful society. Bible scholar Dr. Yael Ziegler explains that the Egyptians buried models of bakeries with them in their tombs. They did not allow foreigners to break bread with them (see the story of Joseph and his brothers). They fed their slaves well and the Israelites remember with longing “when we ate our fill of bread!” (Shmot 16:3). When God commands us to leave Egypt, it has to include Egypt’s culture as well. Leaving the culture of bread and satiety is part of the Passover story. But it is not easy. As the Israelites leave Egypt, a main item they take with them is their משארת:

So the people took their dough before it was leavened, their kneading bowls wrapped in their cloaks upon their shoulders. (Shmot 12:34)

Rashi following the midrash translates משארת  as the leftovers of their matza and maror. But Ibn Ezra and other more literal commentators say that this is the bowl you make your bread in, the most essential item in your house. In the desert, God teaches the Israelites to rely on manna, bread from heaven, which is not in your control but in God’s hands. Once we enter the land, we go back to baking bread but once a year we take a leap of faith and throw away the starter, going back to the real Starter. 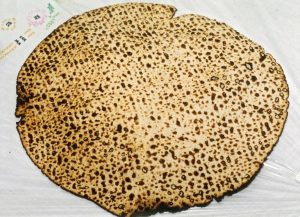