In its list of superlatives (the greatest party, greatest building, etc) our Gemara includes the Great Synagogue in Alexandria: “if you have not seen the diploston of Alexandria in
Egypt, you have not seen the honor/glory of Israel.” We then have a fabulous, hyperbolic description of a synagogue that could hold over one million inhabitants and that had to
use flags in order to signal to the crowds when to say amen. My favorite detail in the story is how the people sat according to their professions, so that when a poor stranger arrived, he would go directly to his profession’s section and get help and job tips.

What was the community of Alexandria that it had such an amazing edifice? Alexandria was one of the major cities of the ancient world and today it is still the second largest city
in Egypt. Situated on the Meditteranean: 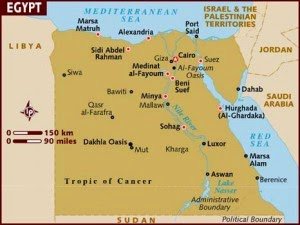 it was ideally located for trade. One of the Seven Wonders of the ancient world, the Pharos Lighthouse, guided the ships into port.

Alexandria was founded by its namesake, Alexander the Great, in 331 BCE, and was
a center of Hellenistic culture from the start. The other famous edifice in the city was
the library. Our sources refer to the Targum Shivim, the Septuagint, a translation of
Torah into Greek commissioned by King Ptolemy II from the Jews, presumably for the
library. Jewish sources view this first translation as a tragedy but it can also be seen in the
larger context of a Hellenistic quest for knowledge. The library was destroyed in the first
century CE. 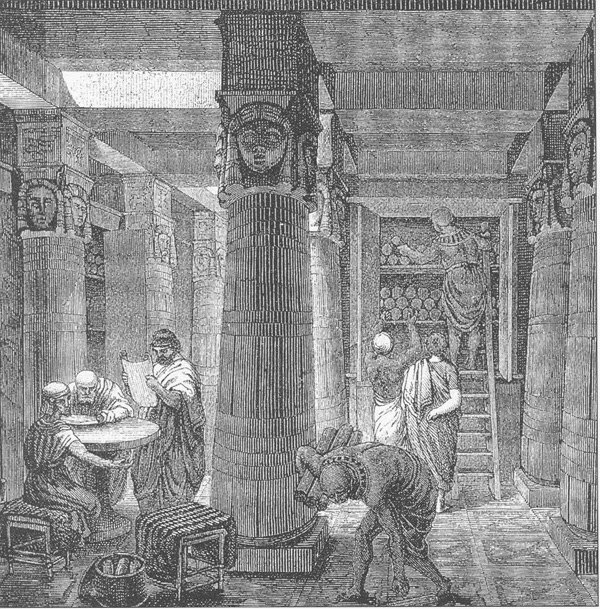 O. Von Corven’s depiction of the library, from beautiful libraries.com
A lot harder to reshelve books when they are papyrus scrolls.

But what about the Jewish community? Jews returned to Egypt after the destruction of
the First Temple and when Alexandria was established, they became one of the most
prominent groups in the city. Sources tell us that two out of five of the city quarters had a
Jewish majority, and of course we hear about the famous synagogue. Jewish Alexandria’s
most famous resident, Philo, is a perfect example of the synthesis of Jewish learning and
Hellenistic philosophy that the community was famous for.

But like in many Diaspora communities, here too the Jews were charged with dual
loyalties and sometimes denied the full rights of citizens. A bloody battle in the first
century BCE about granting Jews citizenship rights was the first blow, later in the Trajan
Revolt of the second century CE the Great Synagogue was destroyed. Beauty, glory and
honor, as the Gemara describes, but ultimately ephemeral.

To learn about another interesting citizen of Alexandria, read this post: http://israeldaf.blogspot.co.il/2013/12/nicanor-who-made-gates.html