Our learning this week is focused on the ktoret, the incense offering. Only on Yom Kippur is the ktoret brought into the Holy of Holies and it is one of the most significant of the many acts the High Priest performs that day. Of course, the ktoret is also offered every day, on the special small golden altar inside the Temple. 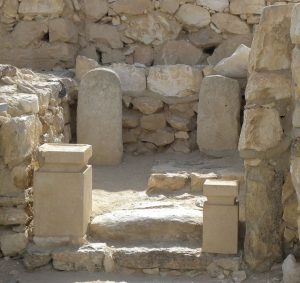 An incense altar at an ancient temple in Arad (Wikipedia)

What is this combination of aromatics and what do we know about them?

The Torah in Shemot 30:34 lists four components of the ktoret:

I am deliberately not using the translation, the four ingredients listed here are: nataf, shahelet, helbona and levona.

The Gemara in Keritot 6 defines some ingredients and adds others:

Nataf is defined here as tzori, or balsam, shachelet as tziporen, other ingredients including myrhh and cinammon are added. Notice that the ingredients are very specific but not the methodology – only the Avtinus family had the secret technical knowledge of how to make the incense smoke rise straight up, if you recall our story from last week.

Can we define all these ingredients? There are those who have tried and you can even buy incense mix on the internet (really, google it). We will limit ourselves to looking at the three most famous ktoret components, tzori צרי, levona לבונה and mor מור. These three have commonly accepted English names: tzori is balsam, levona is frankincense and mor is myrhh. They are all derived from plants and all the plants are from the same family, the Burseraceae or incense tree family. Each one was famous in ancient times for its sweet smell and medicinal properties and was a prized product. If you could grow it, or even better if you could produce the aromatic oil or perfume from it, success was yours in ancient times. 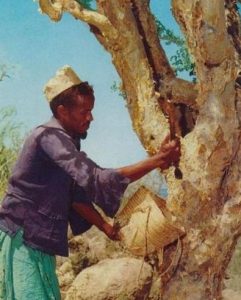 Collecting the resin from a myrhh tree (Wikipedia)

Balsam (called afarsemon in Mishnaic times, its scientific name is Commiphora gileadensis) is perhaps the most famous of the trio. Already in Biblical times, we hear about the Ishmaelite traders bringing it down to Egypt (Bereshit 37). When Jacob has to send a gift to “The Man” who controls everything in Egypt, he includes balsam among his offerings, presumably because it is something that was difficult to get in Egypt. Balsam is a plant that thrives in hot climates and it was grown in Jericho and Ein Gedi. It also grew in the TransJordan in the area of Gilead  and therefore “balm of Gilead” was another name for it. Here in the Medva map is a balsam plant growing on the other side of the Jordan: 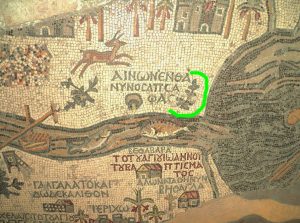 What was so special about the balsam plant? It produced oil that had a strong smell, but the more valuable product was the perfume made from it. Herod owned balsam plantations that Marc Antony took from him and gave to Cleopatra, clearly a gift fit for a queen. The Talmud and the midrash write about the powerful perfume made from the balsam, and we know that wealthy women walked around with small vials of perfume around their necks (the world smelled worse in those days). We have found a few of these vials, one recently at the archaeological excavations in Migdal by the Kinneret. We have also found evidence of balsam plantations and production centers down near the Dead Sea.

Levona (Boswellia thurifera) has a name that derives from the white (lavan) color of its dried resin. Its evocative English name, frankincense, comes from old French and just means noble or pure incense. Levona was rediscovered by the Crusaders and brought to Europe where it became popular in church incense. In Temple times, besides its use in the ktoret, it was also added to the mincha meal offerings and to the lechem hapanim, the showbread. We will be hearing more about levona when we reach masechet Menachot. 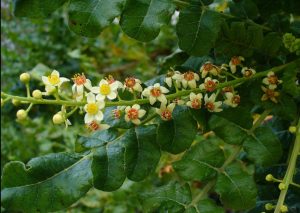 Mor (Commiphora myrrha) was also a popular cosmetic and sweet smelling oil. Besides its mention in the Song of Songs,we hear that Esther, in her preparation to go before King Ahashverosh, immersed herself in myrhh oil for six months. Mor was used not only in the ktoret but also in the anointing oil used on the Temple vessels. It had such a strong connection to the Temple that one source in Bereshit Rabba claims that Mount Moriah, where the Temple stood, was named for the mor!

All three aromatics have medicinal properties that were known in the ancient world. They were used for healing wounds as well as for calming people. The gemara in Sanhedrin (43) says that those condemned to death were given a cup of wine with levona in it to dull their senses and calm them before their execution. One fascinating new study claims that levona has an anti-depressant effect and another notes its anti-cancer properties.

Christians have a strong connection to mor and levona because they are among the gifts the three wise men bring in the New Testament to the baby Jesus. That is why if you go to spice stores in the Old City of Jerusalem, mor and levona (i.e., myrhh and frankincense) are prominently displayed: 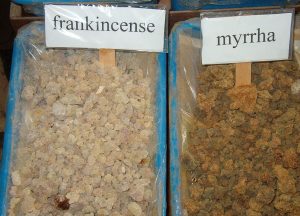 Finally, there are farmers and scientists growing and studying these plants today. Guy Ehrlich, down in Kibbutz Almog by the Dead Sea, wanted to grow mor and levona but they do not grow in Israel today. He managed to get one plant and today has an orchard with over one thousand mor, levona and tzori plants. Dr. Elaine Solowey in the Arava is studying the plants and their medicinal properties. And Dr. Zohar Amar of Bar Ilan has intensively studied the plants of the ktoret and now wants to make balsam perfume.