The issue of techumin, one’s permitted amount of space on Shabbat, would not seem to be too connected to  Yom Kippur and repentance, unless you messed up and walked a forbidden amount. But there is a side of Yom Kippur that is very connected to leaving one’s permitted boundaries and that of course is the story of the שעיר לעזאזל, the goat that is sent out to the desert. On Yom Kippur, a sort of super Shabbat (Shabbat Shabbaton), a messenger is sent to walk over 15 kilometers out of the city to the depths of the desert, part of the way accompanied by others. How does this make sense with Shabbat boundaries and what is it all about? 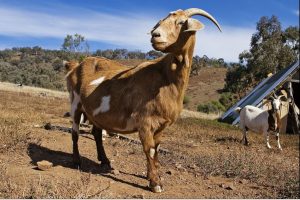 Part of the Yom Kippur service was taking two identical male goats and having a lottery for them. Neither one won a million dollars in this lottery, both of them faced a tragic end. One, the ‘שעיר לה, was given as a sacrifice. The other, the goat that is sent away or the goat to Azazel, שעיר לעזאזל, is laden with the “burden” of the high priest’s confession of Israel sins and sent out to the desert to be thrown off a high mountain.

I am not the person and this is not the place to discuss the philosophical meanings behind these actions. Suffice it to say that everyone, from Maimonides to modern commentators, ascribes symbolic importance to this lottery and to the fate of the goats, seeing in them representatives of ourselves and our sins. My goal today is to understand what actually happened and where. The Torah tells us that the goat is sent in the hands of an איש עתי, literally a man of the times or a man who has been designated for this job according to the Talmud in Masechet Yoma. This man, who could be anyone but was usually a kohen, had to take the goat twelve mil outside of Jerusalem to a particular mountain. How far is a mil? There is much debate about that, is it equivalent to a Roman mile (less than our mile which is about 1600 meters and more than our kilometer, 1000 meters) or to the two thousand amot ( closer to a kilometer) we have been learning about? This question remains unresolved.

In any case, at the very beginning of his journey, the distinguished people of Jerusalem accompanied him. But only at the beginning. They went with him until the end of their techum, the first two thousand amot. They then had to turn back but he could continue. Why? Because he is fulfilling a mitzvah and therefore has no limitations. The Mishnah on 44b and the Gemara afterwards tell us that you can go out for “reshut,” or for need, halakhic or otherwise. The Temple service on Yom Kippur was a very real need.

Along this journey, there were sukkot at ten intervals (or fewer, another halakhic debate).  Every sukkah was staffed by people and stocked with food and water. The messenger could rest, and if need be, eat and drink even though it was Yom Kippur. The Talmud says there was never a need to eat and drink, offering the psychological insight that if one knows one CAN have food, he doesn’t NEED to have food.

At each rest stop, the people there accompanied him to the next one, again only as far as their two thousand amot.  At the tenth and last sukkah, he left them behind and traveled alone an additional two kilometers to the peak of the mountain. While there could have been an additional sukkah in between, allowing him to be accompanied to the end, there was not. It seems that this is to fulfill the idea of bringing the goat to an ארץ גזירה , an uninhabited land. There he tied a red string between the goat’s horns and pushed him off the jagged edge. If the red string turned white, that was a sign that God had accepted our prayers and our worship and would grant us a good year. The messenger walked back to the last tent and waited for nightfall to return to Jerusalem. He was allowed to walk further than two thousand amot (the last sukkah was four thousand amot away) because of the danger of the desert.

Where did all this take place? We know that he headed east, to the Judean Desert, which is very close to Jerusalem. He would have had to cross the Kidron Valley and venture over the Mount of Olives to reach the desert. The Mishnah explains that there was a ramp or bridge built from Mount Moriah to the Mount of Olives, so that the messenger and the goat would not be bothered by foolish people who thought that the goat was literally carrying their sins away.

Once he was on the eastern side of the Mount of Olives, he still had a way to walk. The mountain most likely to be his destination is known today as Jebel Muntar, Arabic for the Lookout or Guardpost mountain. Many people also call it Mount Azazel after the destination of the goat. It commands an amazing view of both Jerusalem and the desert and therefore was a great guardpost. Today it is past Abu Dis and Kedar, southeast of Maale Adumim. It is the correct distance from Jerusalem and while its western side is relatively moderate, its eastern side is jagged and steep. Today you can hike there or take a very bumpy jeep ride. 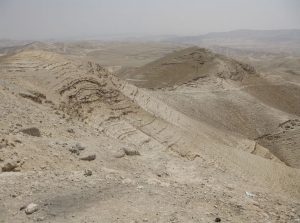 There are other suggestions about where the mountain was, perhaps near Nahal Tekoa or where the Mar Saba monastery is. This excellent article by Rav Yoel Elitzur

gives some possibilities as well as discussing the issue of the mil’s length. His final point seems most relevant. It is less important what specific mountain the goat was taken to and more significant that he had to be brought to the desert, any desert. The desert and Jerusalem are opposites and one is needed to complete the other. May our tefilot this Yom Kippur bring us closer to an ideal state of desert and Temple, gmar hatima tova!