The Age of Innocence

MISHNA: With regard to the children, one does not afflict them on Yom Kippur; however, one trains them one year before or two years before they reach majority so that they will be accustomed to fulfill mitzvot. (Yoma 82a)

This Mishnah is a fascinating part of the story of the child in Jewish law. Usually called a katan, or minor, here he or she is called a tinok, which can mean an infant or at least a young child. Age is not mentioned in the Mishnah, although it is later in the Gemara. The concept of chinuch, educational proto-mitzva keeping, is brought up here. This Mishnah raises many questions – what age is considered a child, should children keep mitzvot that they are not obligated in yet and if so, why should they do that?

That’s easy to answer, says anyone who grew up in, or had a child in a relatively observant Jewish community. A child means up to age twelve for girls, thirteen for boys. Until that age they are not obligated to keep any of the commandments, but we try to teach them about the laws and get them to “practice.“ This practice does not have halachic significance but it is good training for when the child grows up. Once you hit that all important bat/bar mitzvah age, the party’s over. Now you are an adult for mitzvah purposes and no more slacking off. In fact there is a great Gemara that phrases it just like that:

“Rav Yitzḥak said: In Usha the Sages enacted that a person should treat his son gently, until his son is twelve years old. From this point forward he harasses him in all aspects of his life in order to force him to study.” (Ktubot 50a)

But what if a specific age-based definition is not the reality that the Gemara is talking about? The story of the katan in Jewish law is very complex and I will only mention a few issues here. The minor is mentioned all over Jewish law as being exempt from various commandments but here is the catch – there is no one definition of a minor. Minors in Tannaitic sources can range from babies to twenty-year olds and their status depends on all sorts of issues, not least of which is what mitzvah is being discussed. There are mitzvot that require a certain intellectual or physical capability. Once the child attains that ability, he (usually it’s a he but not always) can then keep the mitzvah. Take a look at this passage in Sukkah 42:

As anyone who has met children knows, these abilities can fluctuate wildly – sometimes a three-year old can wave a lulav, sometimes a ten-year old still cannot. Some mitzvot are based on physiological milestones: to be married a girl or boy has to reach a certain level of physical maturity. And sometimes it seems like the mitzvah is incumbent almost from birth. The most extreme case is that of the child who is obligated to go to the Temple on the three major holidays of the year: 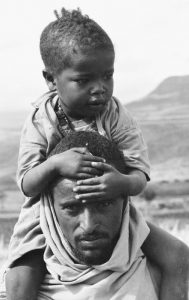 The Mishnah is saying that any (male) child who can hold his father’s hand and walk is obligated to ascend to Jerusalem. Not that’s a nice idea, not to train him, but he has a full obligation, like an adult!

Let’s take this idea one step further. What if mitzvah observance is actually incumbent on everyone from birth and it is only because of circumstances that wehave to push things off for a few years? An instructive, if extreme contrast can be seen in the Samaritan community. This ancient Jewish sect rules that only nursing infants are exempt from fasting. The old, the sick and all children from toddlers up are required by Biblical law to fast. 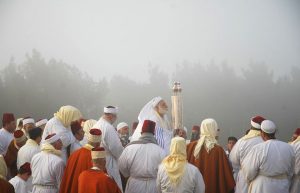 We have an echo of this idea in the traditions about Shammai, who refused to feed his son on Yom Kippur and was forced to by the rabbis (Tosefta 4:5) and who insisted on his grandson being nursed inside the Sukkah. In contrast, Rabbi Akiva mandated that his students go home on Yom Kippur and feed their children! 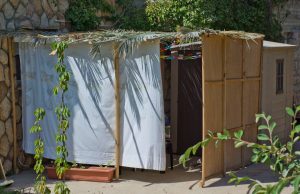 Do baby boys have to eat in the Sukkah? Shammai thinks so (Wikipedia)

The idea that mitzvah observance is the default position and even children are Biblically mandated to keep mitzvot is a trend in the early halacha, best exemplified by Shammai as stated above. This approach seems to emphasize the very Jewish idea that people are placed in this world to do God’s will, already from birth. Perhaps it also is in line with the somewhat Kabbalistic idea that the more mitzvot done in the world, the better; bringing the world closer to redemption.

At some point, the rabbis realized that both the variegated age approach and the obligation from birth approach were basically untenable. There needed to be a standardized law so that people knew what to do. This standard was roughly based on physical maturity and we see it in the Amoraic and in some Tannaitic sources, It is the one we are familiar with today – a halachic adult is a twelve- year old girl and a thirteen-year old boy. Any mitzvot kept before that age are only done from Rabbinic law and are just a nice idea (or an אסמכתא בעלמא as the Gemara in Sukka 28 says). The idea that there is a Biblical obligation for children to keep mitzvot was lost in Halacha.

However, the inclination to be more strict and to insist that even children keep mitzvot persisted. Rabbenu Tam in medieval France was told about people who insisted that their children fast; he frowned upon the practice. The belief that every child matures at a different pace and can take on laws at various ages has also been preserved. In the Yemenite community, boys as young as nine and ten can begin to put on tefillin and read from the Torah for the community if they are capable.

Perhaps this whole question can be connected to the larger idea of how Judaism views children and the family. On the one hand, a child is a “small adult” in the sense that he or she has to practice and learn how to eventually become a functioning member of the community. On the other hand, we do not want to rob children of their childhood and we do not expect them to observe more than they are capable of. Ultimately, each family chooses how young children behave based on their own philosophy, their children’s abilities and their community norms. Let us hope that these practices instill love of the commandments in all our children! 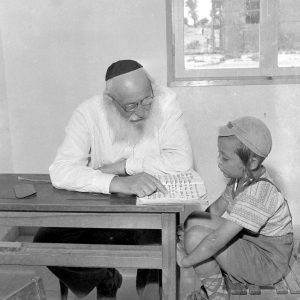