And just like that, we are ready to dive into the botanical world and learn all about maror. Not your Bubbe’s maror, the beloved (or hated) chrein that sits waiting on the seder plate to attack you. We will get to that but first let’s look at the Mishnah’s definitions of maror.

The Torah tells us that “merorim” are the side dish for your Passover sacrifice, along with the obligatory matza:

“They shall eat the flesh that same night; they shall eat it roasted over the fire, with unleavened bread and with bitter herbs.”(Shemot 12:8)

Rashi takes note of the plural form and adds:

“All bitter plants are called maror.”

This seems to leave the options wide open, as long as we define what a plant is and what bitter means. The Mishnah however, gives a very specific list:

And these are the herbs with which one discharges his obligation on Pesah: with lettuce [hazaret]; with chicory [olshin]; with wild chicory [tamkah]; with picridium [harhavina], and with sonchus [maror]. (Mishnah Pesachim 2:6)

Before we get to the thorny (pun intended) question of what each of these plants are, the careful reader will note that five species are listed here (although the Gemara will add a few others). Is there an intended parallel to the five types of grain that are permitted for making matza? Or are these merely examples and you can add to them as you wish? The Gemara seems to imply that there are more options: Rabbi Yehuda says anything that has sap, Rabbi Yochanan ben Beroka says any plant whose leaves are light green. Maimonides however seems to limit the options to these five, and the criteria of sap and color are meant to help us identify these particular plants.

Are the plants listed in order of preference? Is it better to eat hazeret than tamakh or is the listing arbitrary? Rabbi Oshaya in our Gemara says that the main way to fulfill the mitzva is with hazeret but others disagree.

Of course, the main question is, can we identify these plants? Although there are many controversies, some plants are easier to label than others. Everyone agrees that hazeret is lettuce, specifically romaine lettuce. 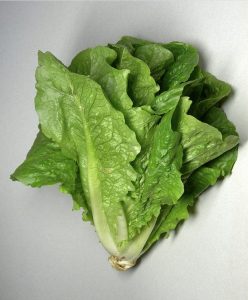 The Gemara has a lovely pun about lettuce and why we use it for maror. Lettuce in Hebrew is חסה, because God had mercy (חס) on us and took us out of Egypt.

Another variation brought in the Gemara is hazeret galin חזרת גלין. Professor Yehuda Felix explains that this is a type of wild lettuce known as compass lettuce (its Latin name is lactuca serriola). It grows wild, near garbage and has prickly leaves. What gives it its strange nickname is the fact that the leaves are invariably aligned north-south, so that they don’t get hit with the full force of the midday sun.

Olesh עולש is translated by the Gemara as hindevi, we know that as endive. Endive and chicory are related to each other, their young leaves are soft and later become hard. Maimonides thinks that tamcha תמכא ,one of the more mysterious of the plants, is also a type of endive. Harhavina חרחבינה is another tricky one. Felix, as well as Zohar Amar, following Maimonides, define it as a plant called Eryngium creticum. 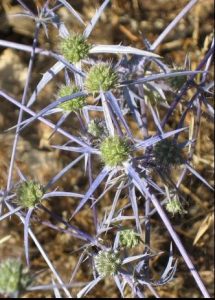 This plant was known by the Arabs as Abraham’s thorn or the Jews’ thorn, showing that they knew Jews used it for Pesach. Like many of the others listed here, the Eryngium starts out with soft young leaves. However, by the summer, these leaves are dead and new thorny leaves grow. This transformation is what the rabbis are referring to when they see the allegorical side to maror:

Finally, the Mishnah lists maror, or as the Gemara calls it, merirata. This is a weed called the sowthistle, which has yellow flowers in the summer. This is the favored maror of the Samaritans, who eat it alongside the Passover sacrifice that they prepare every year on Mount Gerizim. 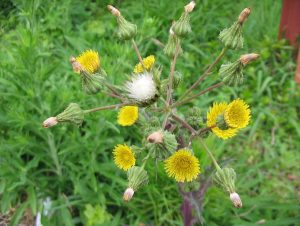 The bottom line is that all these types of maror are wild plants of the land of Israel, most of which would not earn a second glance (or bite) today unless you are an extreme foodie. In ancient times, people ate what grew, as long as it wasn’t poisonous. Safrai compares it to the siege of Jerusalem in 1948, when suddenly everyone started gathering wild hubeza (mallow) from empty lots and cooking it, because there was so little food that reached the city.

The Gemara raises and rejects the possibility that maror could be something that is not a vegetable, a bitter fish or a bush like the oleander. Just as matza must come from edible plants, grown from seeds, so too maror. And what about Bubbe’s horseradish? 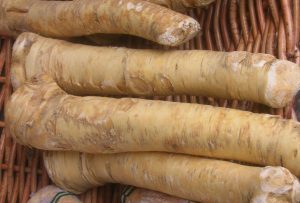 As the Jews spread throughout the Diaspora, the knowledge of indigenous Land of Israel plants disappeared. In Europe, besides the lack of botanical knowledge, there was the practical issue that Pesach falls in the early spring and the greens listed here may not have been ripe yet. In the 17th century, Rabbi Yom Tov Lipman Heller of Prague defined the tamcha of the Mishnah as chrein, horseradish root. Earlier sources said that the hazeret was chrein. Either way, the horseradish root became popular on the seder plates of Eastern European Jews, despite it clearly not being a plant that grew in the Land of Israel in the time of the Mishnah.

So romaine or chrein? Now that we are fortunate to have returned to the Land of Israel and to have begun learning its botanical secrets, eat your maror from the fruits of the land, which are sweet even when they are bitter.