When Rav Dimi came from Eretz Yisrael to Babylonia, he said: It once happened that the people forgot and did not bring a Torah scroll to the synagogue on Friday while it was still day, which meant they were left without a scroll from which to read on Shabbat. On the following day, Shabbat, they spread a sheet over the pillars positioned between the house where the scroll was kept and the synagogue, thereby forming a corridor with partitions suspended on each side. And in this manner they brought the Torah scroll to the synagogue and read from it.” ( Eruvin 86)

In the context of a discussion about partitions and water, we are suddenly drawn into the world of second century Zippori, its synagogue services and its halachic issues. We are exposed to the Zippori “mara daatra,” the halachic authority of the town, Rabbi Yosi ben Halafta, and his son Rabbi Yishmael. And we get some insight into ancient synagogues as well. So let’s unpack the context of the story.

The first thing that jumps out at the reader, who is probably familiar with modern synagogues, is that the Torah must be brought to the synagogue, it isn’t there already. Ironically, this rings a bell in Israel today, where so many of us are now praying in outdoor minyanim and the Torah has to be brought from someone’s house. But for centuries, Torah scrolls were kept (usually under lock and key) in the ark in the synagogue. Why would the Torah have to be brought? The second thing we notice is that the synagogue is located near a home, close enough to create a pseudo partition to bring the scroll through. And we also find out that the story took place in Zippori, a major Jewish center in the Galilee.

Let’s deal with the Torah in the synagogue first. The mishnah in Taanit discusses how on fast days the תיבה  teva was brought out into the main square of the city and the people prayed there:

“What is the order [of service] for fast days? They take the ark out to the open space of the city. “(Taanit 2:1)

From here we get the impression that this teva is a movable piece of furniture. In fact, in Kfar Nachum near the Kinneret, a stone carving was found of an aron on wheels: 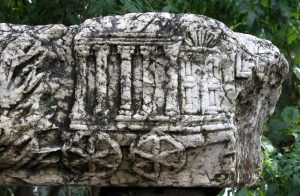 Does that mean that there was no permanent space in the synagogue for a Torah ark? Not necessarily, there could have been a movable and a permanent ark. However, when we look at the evidence of ancient synagogues we find something fascinating. The earliest synagogues, from the first century BCE to the year 70 CE, like those at Masada, Gamla, Migdal and Herodion, did not have a designated space or niche for an ark. They had benches around the perimeter, pillars and at least in the case of Migdal a very unusual decorated stone, but no ark. Later synagogues on the other hand, from the fourth century CE, mostly did have a space for an ark, or a mosaic representation of an ark, or even an elaborate stage on which to put an ark. They also placed this ark in the wall facing Jerusalem and often placed the entrance opposite it, something that was less important in earlier synagogues.

A few examples: in Sussia and Maon in the southern Hebron Hills archaeologists found marble remains of a partition on the north (Jerusalem facing) wall of the synagogue, as well as other indications of a bimah and an ark. In Sussia there is a mosaic depicting the ark with menorahs on either side. A modern rendition of this sanctified area is in the Susya community synagogue: 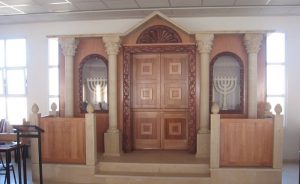 A similar mosaic was found in the Hamat Tverya synagogue by the Kinneret, as well as a niche for an ark: 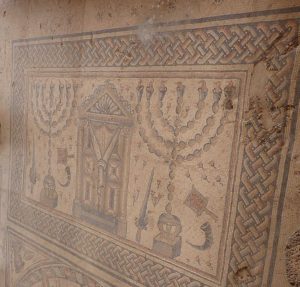 The most fabulous example was found in Um el Kanatir in the Golan where archaeologists found what they call a heichalit, a stage that is five meters tall for the aron: 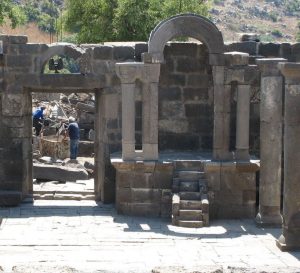 All these synagogues are from the fourth century and later. It seems there was an evolution from earlier synagogues, where the Torah was kept in another place, perhaps for safekeeping, to a more established synagogue with a permanent ark. It is hard to say when this transition happens because we have not discovered many synagogues from the period between the destruction of the Temple (70 CE) and the fourth century, but new ones are being found all the time and this mystery will be solved one day.

But what about Zippori? Our story takes place in the time of Rabbi Yishmael, the son of Rabbi Yosi ben Halafta. Rabbi Yosi lived in the late second century CE. He was a student of Rabbi Akiva and was the halachic authority of the town of Zippori, like his father Halafta before him. Rabbi Yosi is an important link in the chain of tradition since he was one of the few to receive rabbinic ordination in those terrible days of persecution and one of the few students of Rabbi Akiva to survive and pass on his teachings to HIS student, Rabbi Judah the Prince.

What did Rabbi Yosi’s Zippori synagogue look like? Did it have a Torah ark or not? Unfortunately, although the Talmud tells us that there were eighteen synagogues in Zippori, so far we have only found one. It is beautifully decorated with an elaborate mosaic and a space for an ark but it is from the fifth century, hundreds of years after Rabbi Yosi and Rabbi Yishmael’s time. Will we find Rabbi Yosi’s Zippori synagogue one day and discover if it had a permanent ark or not? Stay tuned, archaeology is always full of surprises!