The Weaver’s Rod is Between Them

You can probably guess that my favorite line so far in Masechet Shekalim appears in today’s daf (Daf 12b).  To emphasize his view of the great difference between female animals and blemished animals in the discussion, Rav said…”the weaver’s rod is between them.”  .רַב אָמַר. שִׁיבְטָא דְכַרְכָדָא בֵינֵיהוֹן.

Rav meant that in the process of weaving, it is necessary to separate and create a large gap between the upper and lower threads of the warp in order to pass the weaver’s rod (shuttle) with the weft threads through that space to create a woven row of fabric. (See my earlier videos on weaving for a review). https://hadran.org.il/wp-admin/post.php?post=14175&action=edit&lang=en

But actually, it’s interesting that Rav uses this image to describe two things that have a very large difference between them, because threads are soft and they sometimes stick and misbehave.  While the rod is in between, there is a space, but when the rod is taken away, the threads move back together and then in the opposite direction…what was up is now down, and vice versa.

And it seems to me that sometimes we think there are very big differences between people or ideas, but then we discover it is not so clear cut.  As Hanan Ben Ari sings in “Wikipedia”, it’s very convenient to put people in categories and assume that if they hold a certain view on one topic you can predict their views and actions in every other realm.   But most people’s views are nuanced–based on their own experiences, situations and personalities.

For example, not all religious Jews think the same way about every topic, neither do all secular Jews, all Arabs, or all members of any other group in our society.  The strings in the warp have natural tendencies to lift and lower according to the way they are strung on the loom, but they can shift and can also be adjusted by the weaver to create more intricate and complicated patterns.  The divisions are temporary.  As the threads are raised and lowered, at a certain point they are all exactly in the center.  The groupings can also change. For example, in some patterns, strings 1 and 4 are lifted first, and then strings 2 and 3, but in the next pass with the thread, strings 1 and 3 are lifted together, followed by 2 and 4.  The underlying predictable structure of the pattern helps to give strength to the tapestry, but the creative variations in the pattern make it beautiful and unique. 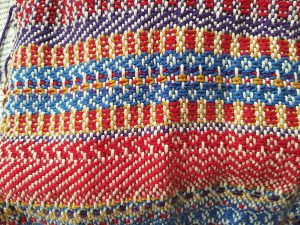 As we weave our country’s future, let’s recognize that the groups of threads must work together to make cloth.  The weaver’s rod is a temporary obstacle to the unification of the threads and the completion of the whole tapestry.  Chag sameach and Shabbat Shalom!