The Writing On the Wall

This week we begin looking at the melacha of kotev, writing. The Mishnah on daf 103 explains how much one has to write in order to be transgressing the rules of Shabbat. The Gemara segues into a discussion about how letters have to look in a Torah scroll and from there to a wonderful page of aggadeta about the shapes of the letters and their meanings. Rabbi Yehoshua ben Levi brings examples of pearls of wisdom he heard from children about the meanings of the letter: aleph bet stands for alef bina (learn wisdom), gimel dalet for gmol dalim (give to the poor), etc. All this is a great introduction to the question of when and how did our alphabet, and indeed all Western alphabets, since they are all derived from ours, begin?

Let’s start with a word on the brilliance of the alphabet system. Before there was an alphabet there were two systems of writing in the ancient Near East. One was hieroglyphics: word pictures; and the other was cuneiform: designs of arrows and lines made by a stylus in clay. Both of them were systems based on an image for a word or sometimes for a syllable. As such, a person had to learn thousands of symbols in order to be able to read and write. This meant that literacy was only for the elite, or for those who used it professionally like scribes. But almost four thousand years ago a group of slave miners in Serabit al Khadem in the Sinai created a new system – an image for every sound. There are a limited number of sounds a human can make – 22, 26, maybe 30 – so this new system was accessible to all. It stayed underground for a while but emerged in Phoenicia and then Canaan in about the 13th century BCE and became the basis for pretty much all western alphabets. 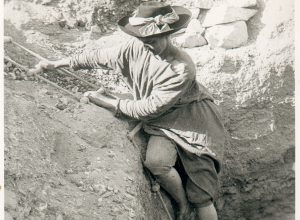 In the oldest proto-Canaanite alphabets, the letter (usually) looks like a word that it starts with. In the chart below you can see that bet is a bayit, a house, kaf is kaf hayad, the palm. Mem is mayim, water, nun is a nachash, a snake slithering across the page. An ayin is an ayin, a eye, and a peh is a open mouth, a peh. Simple right? Well, reading ancient inscriptions is often not very simple. First of all, the letters became more abstract as time passed and there were variations on them. Second, there were no final letters (mem sofit for example) and often not much space between words so it is difficult to know when one word ends and another starts. And to add even more fun, there was no standardized way of writing. Sometimes you wrote right to left, sometimes left to right, and sometimes boustrophedon. That one is my personal favorite. It means as the ox plows – right to left, then left to right, etc. 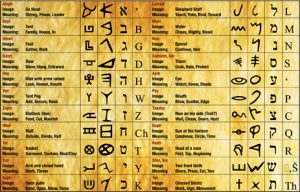 An alphabet system contributed to widespread literacy and we know that ancient Israel was a pretty literate place. We have testimony about people writing lists (Gideon in the book of Judges asks a child to make a list of the town elders) and we have many seals and some inscriptions. This does not mean that everyone could read and write and it is clear that even much later, in the time of the Talmud, that there were people who could not read and write and needed someone to recite the prayers aloud for them. But there were many who could. The most common written artifacts we find from First Temple times are seals and seal impressions (bullae). A seal was kept by anyone important: a government official, a scribe, a businessman and even some women. It sometimes was a ring, sometimes was on a necklace, could be made of different materials but all seals had some identifying characteristic, usually the person’s name, that would show up in wet clay. We have found many seals and seal impressions in the land of Israel, some belonging to people whose names appear in the Bible, like Gemaryahu ben Shaphan and even Hezekiah King of Judah. 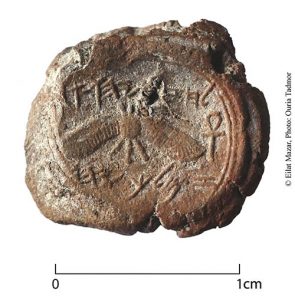 At some point during Second Temple times (the Gemara attributes it to Ezra) Hebrew writing changed from the original, called Ktav Ivri, to the writing we use today, called Ktav Ashuri (Assyrian writing). That’s why almost all writings from Second Temple times are easy to read, they look just like our writing. The Dead Sea Scrolls are the same, with one fascinating exception: they chose to write God’s four-letter name in the ancient script. Did they think it was more holy? Less holy? We don’t know.

Inscription found at the southern wall excavations, reading LeBet HaTekiah Leha. . . (to the house of trumpeting to. . )

Given that the Gemara is aware that there were two scripts and the script in First Temple times is not the script they are using, it is fascinating to read the midrashim on our page and similar ones about the letters on the Tablets Moses brought down from Sinai. The midrashim are referring to the later letters, it is clear from how they describe their shape. Perhaps the Tablets were a special exception, given to the Jewish people in what would eventually become their script?