Rabbi Judah further said: two unfit loaves of thanksgiving used to lie on the roof of the [Temple] portico: as long as they lay [there] all the people would eat [chametz]. When one was removed, they would keep it in suspense, neither eating nor burning [it]. When both were removed, all the people began to burn [their chametz].”

In order for terms like the sixth hour to have meaning, people needed to have some method of keeping time. These two adjacent mishnayot give us a sneak peek into a fascinating question about the ancient world: did people tell time, and if so, how?

First of all, it is important to note that most people only needed to have the most basic rudiments of time. You woke up with the sun, prayed, went to work, ate, worked some more, came home, ate again and went to sleep by sunset. No appointments, no Google calendar, no cellphones with precise time. But there were situations – hametz eating for example, or witnesses giving testimony – when telling time was necessary. 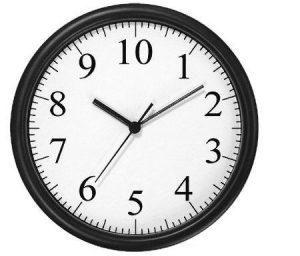 The Romans divided the day into ante meridiem, before the noon, and post meridiem, after the noon (this is where our AM and PM come from). Once sundials were introduced to ancient Rome, they divided the day from sunrise to sunset into twelve equal parts. An hour was not always sixty minutes but rather depended on the time of the year. In the summer an hour could be as long as seventy five minutes, in the winter as short as forty five. The Romans also divided the night into four sections, called watches and had two forms of days, one called the civil day, which went from midnight to midnight and one called the natural day which was from sunrise to sunset. 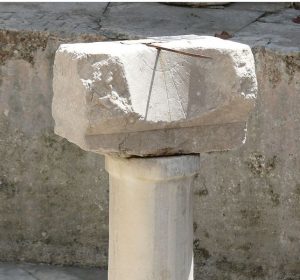 We find almost all these forms of timekeeping in the Gemara. Rabbi Yehuda on our daf talks about how if one set of witnesses says they saw something happen at the fifth hour and the other set says it happened at the seventh hour, clearly they contradict each other since you would not confuse the morning sun in the east with the afternoon sun in the west. Here we have ante and post meridiem. Dividing the day into twelve equal parts is found all over the Gemara (Jews called these hoursשעות זמניות ) and helps us to determine hours of prayer among other things. Watches of the night are familiar to us from the beginning of Berachot where the timing of Kriat Shema at night is discussed. And different ways of defining a day (do we begin at night? from sunrise? any twenty four hour period?) is an issue that arises in many places in the Gemara.

To be able to know specific hours you needed some form of a time-keeping device. The form common in our area was a sundial. Probably the earliest sundials are from Egypt and that famous Egyptian symbol, the obelisk, was often used as the gnomon (the stick that makes the shadow) of a giant sundial. 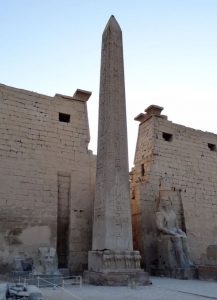 We hear about sundials in the Bible, in the story about King Hezekiah’s illness. Hezekiah asks for a sign from the prophet Isaiah that he will heal from his sickness and Isaiah promises him that the shadow will recede from the sundial even when the sun stays in the same place:

“So the prophet Isaiah called to the LORD, and He made the shadow which had descended on the dial of Ahaz recede ten steps.”(Kings 2 20:11)

In the Golan there is a large stone structure called Rujm a Hiri which some suggest was an enormous sundial, a local version of Stonehenge. 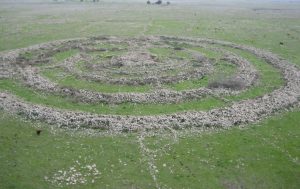 The rabbis were familiar with sundials and called them אבן שעות, an hour stone. They discussed whether the gnomon can become impure or not. A sundial can give you a more or less precise time (to the hour, if not the minute) but there were two problems with them. One, they needed to be calibrated for the season and the place where they are located. Two, they only worked in the daytime and when it is sunny. Still, they were better than nothing but not exactly common to everyone (see above how no one needed to know what time it was).

Who did have sundials and did need to keep track of time? Priests and Levites, because Temple worship is very time dependent. In archaeological excavations of the past century, we have found a small number of sundials from the time period of the Second Temple. Most of them were found in various locations in Jerusalem. Benjamin Mazar found a few in his excavations at the southern corner of the western wall of the Temple Mount. Nahman Avigad found some more in his excavations of the fabulous houses of the Kohanim in the Jewish Quarter. It seems likely that these were the places the sundials were found (as opposed to in Herod’s equally opulent palaces, for example) since these were the people who had to worry about time and had to convey time to the masses. Mazar found a sundial at the southwestern corner below the Temple Mount, near the sign showing where the Bet HaTkiah was located. This was the place that a Levite would go to on Friday afternoon and blow shofar to show that Shabbat was beginning (see Shabbat 35b). 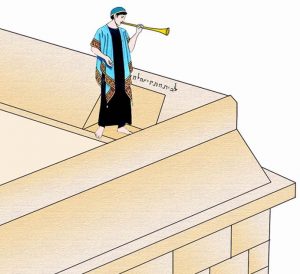 One other place where an elaborate and not fully understood sundial was found is the site of Qumran, the home of the writers of the Dead Sea Scrolls (probably). These ascetics abandoned the Temple in Jerusalem and went to found their own holy place outside Jerusalem. Time and calendar were important to them and that may explain this strange sundial, which may be a calendar as well.

Sunrise and sunset remain important for Orthodox Jews as well as for Muslims today, both groups base their prayer times on the sun. That is why in any elaborate mosque as well as in some synagogues (in Israel at least) you can find sundials. Here is a famous example, the Zoharei HaHamah synagogue on Jaffa Road which was famous for starting services at dawn. 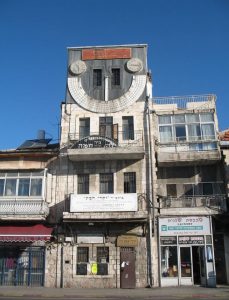 Let’s use our time wisely, however we keep it!