To Dust You Shall Return

Proper burial is a very significant idea in Judaism. We go to great lengths to ensure that the body is treated in a dignified manner and brought to a Jewish grave. So it is rather distressing to read that in the case of a man who has married illicitly, he is to be buried separately, with evil people:

“What difference does it make if we consider it as though he transgressed twice? It affects the decision whether or not to bury him among the completely wicked.” (Yevamot 32b)

The Gemara is referring to a law presented in the Mishnah in Sanhedrin. In the case of an executed criminal, his body is not placed with the others in the community but rather in one of two separate sections.

Our sinner in Yevamot may perhaps be included among the wicked who need to be buried in a separate place, not with his family, a dire fate indeed. But let’s go back a few steps. Why do Jews bury and why in cemeteries? What do we know about the Jewish attitude to the dead from the cemetery? And are there really separate sections for confirmed evildoers? 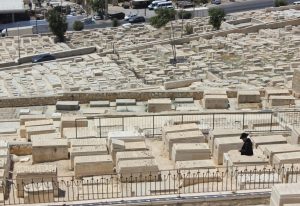 The Gemara in Sanhedrin 46 deduces the requirement of burial from the law about a condemned criminal. He is hung so that everyone knows the severity of his crime, but his body must be taken down by the end of the day and buried:

“you must not let the corpse remain on the stake overnight, but must bury it the same day. For an impaled body is an affront to God . . .” (Devarim 21:23)

Because of the doubling of words, קבור תקברנו, the Gemara elucidates that the law of not leaving a body overnight applies not only to the criminal but to any dead body. Rabbi Meir tells a beautiful parable to explain why one may not leave a body exposed. He tells of twins, a king and a criminal. The criminal is executed and his body is hung for all to see. The king is concerned that people would think that it was he, the king, who had been executed, so he orders that his brother be taken down and buried. We too resemble the King, we are created in God’s image. Therefore it would be inappropriate for a human body to remain hanging on a tree.

The Gemara goes on and shows how the mitzva of burial is obvious to anyone who reads the Torah. Abraham seeks out a burial plot for Sarah; all the patriarchs and matriarchs are buried, often with great difficulty. Joseph’s bones are brought back for burial by the Israelites in the Exodus, after being in Egypt for centuries. And even God engages in burial, as we see from the story of Moses, who is buried according to the midrash by God himself.  Burial is such an important mitzva that you can forsake Torah study and other mitzvot in order to bury someone who has no relatives, a מת מצוה. 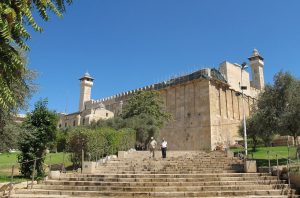 The Cave of the Patriarchs in Hebron (Ooman, Wikipedia)

Wealthy people in ancient times buried in family caves. But even common people needed to be buried in one centralized place, partly so that kohanim would not become impure by stumbling upon graves and partly so that graves would not be desecrated. Although it seems that there were many random graves even in the time of the Gemara, slowly burial became more standardized and there were central cemeteries. They were well cared for but were also considered places where the demons hang out and where you should not go alone or at night.

The idea of respect for the dead, כבוד המת, prompted certain rules about cemeteries. One should not go into them with a tallit and tefillin since that is seen as לועג לרש, making fun of the dead. They are no longer able to keep the commandments so do not mock them by showing them that you can. Trees and flowers were also traditionally not planted in Jewish cemeteries – see the stark slopes of the Mount of Olives for an example. Some think that this stems from a similar idea – the dead can no longer enjoy their beauty so the living shouldn’t either –  but it is probably because trees create an overhang that will cause kohanim to become impure even if they do not enter the cemetery. 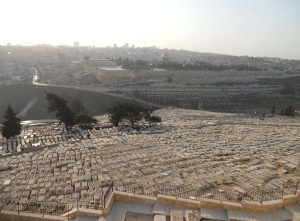 Cemetery on the Mount of Olives (Zion HaLevi, Wikipedia)

Let’s go back to our Mishnah in Sanhedrin. Here the ruling is regarding someone who is executed, and is considered a wicked person. He is placed in one of two separate cemeteries, depending on the severity of his crime. But is he left there? The Mishnah concludes with the statement that he is only left there for the time it takes his body to decompose. After that his bones are placed in an ossuary in the family plot:

“Once the flesh had decomposed, they would gather his bones and bury them in their proper place” [in his ancestral burial plot] (Sanhedrin 46a)

So it seems that the Gemara is not advocating separate sections for sinners for the ultimate burial. How does this play out in halacha? The Shulhan Arukh (Yoreh Deah 362) rules that a sinner and a righteous person should not be placed next to each other, nor should two enemies be buried alongside each other. It also discusses whether we mourn for apostates and suicides, but does not say that they are buried apart from the community. The myth that those with tattoos are not buried in a Jewish cemetery is just that – a myth. Even the worst of sinners can be buried in a  Jewish cemetery and suicides are buried there as well

Cemeteries are potent places. Some go regularly to visit the cemetery and pray at graves, others see this as דורש אל המתים, asking the dead for their assistance, and see it as a form of idolatry. But whether or not the cemetery is a good place to visit, burial has always been important. In modern times, the State of Israel has gone to great lengths to bring back soldiers’ bodies for burial. After the War of Independence, Rabbi Shlomo Goren received permission to go behind enemy lines and bring back bodies so that they could get a proper Jewish burial. In more recent times, there was the extraordinary case of Zechariah Baumel. Baumel and two comrades were attacked in Sultan Yakub in Lebanon in 1982 and presumed dead but their bodies were never found. Baumel’s family waged a ceaseless campaign to return him and the others, believing that they were still alive.. Almost forty years later, in 2019, Israel, though an extraordinary set of circumstances, received Zechariah’s body back. Baumel was found in his IDF uniform and wearing his tzitzit, all miraculously intact. His name was still readable (!) on the uniform and on his boots. He was brought to be buried in the Mount Herzl military cemetery.

The funeral was attended by thousands, among them Baumel’s former yeshiva friends as well as current students from Yeshivat Har Etzion, where he had studied before the army. Miriam Baumel, his mother, was there, along with Zechariah’s siblings. His sister Osna Huberman spoke: “I thought to myself, what will I do in this place? I cannot even hug him so I thought to ask the earth to embrace him, to embrace him tightly. After a few minutes I understood that I don’t need to ask. . .The earth is embracing him very tightly. And why? Because there is a strong love between the son who gave everything for the earth and the earth itself, there is a complete unity here, you are now together.”