Up the Down Staircase

What a beautiful mishna to finish our posts of Shekalim with! The mishna at the beginning of the eighth chapter tells us that if we find vessels in Jerusalem, near the mikvah, are they considered pure or impure? Rabbi Meir answers that it depends on where they are found:

Rabbi Meir could have chosen the stringent route and decided that any unknown vessels are most likely impure. However, he chose to see what information was available and base his decision on that. Rabbi Meir was familiar with mikvaot that had two staircases. If the vessels are on their way down to the mikvah, then clearly they have not been immersed yet and are impure. And if they are on their way up, they have been purified and you should feel free to use them.

The mishna assumes that there are two ways to approach the mikvah, one going in and one coming out. The commentators understood the basic principle. The Korban HaEdah explains that there was an entrance and an exit to the mikvah so that the impure would not touch the pure and thereby render them impure as well.  However, as much as the principle was grasped, it was only made real in the last few decades with the discovery of mikvaot from the Second Temple period. Today most Israeli children can identify an ancient mikvah but seventy years ago they had not yet been discovered. Even archaeologists were not familiar with how they looked, certainly if they had no exposure to Jewish texts and traditions. An amazing story of an excavation in Ein Karem in Jerusalem illustrates this point.

In 1940, the British army parked tanks in the courtyard of the Franciscan church of John the Baptist in Ein Karem When they removed the tanks, the courtyard was torn up and the fathers decided to take the opportunity to excavate the site. The Franciscans are known for their scholarship and their interest in archaeology. Father Sylvester Saller, who led the dig, wrote up a report about the finds. Once the dig was over, some finds were left out to be seen but much was covered so that the church could continue to function. Fifty years later, a scholar of Jerusalem, Tamar HaYardeni, was writing a book about Ein Karem. She came across Father Saller’s report and started to read. Saller described a strange installation that was found in the dig. It was plastered, and so clearly meant to hold water, but it was not round and deep like a cistern, but relatively shallow with steps leading down to it. He could not figure it out and ultimately covered the whole installation. HaYardeni on the other hand, immediately understood that Saller had discovered an ancient mikvah! She requested permission to go see and photograph it, even though it was off limits to the general public. And indeed, it was a perfect Second Temple period mikvah. The great irony is that the church is named in honor of John the Baptist, who was a Jew who was deeply familiar with mikvah and purification, hence his title. If only Father Saller had known that he might have found John the Baptist’s mikvah! 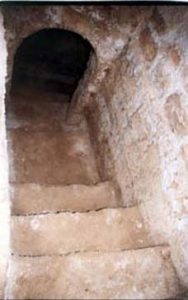 Over the years, dozens, perhaps hundreds of ancient mikvahs have been discovered in Israel. They are all from the Second Temple period and later, so far no one has found a First Temple period mikvah. This could be because purity laws were not as well kept in First Temple times, or they were kept but in different ways, like by going to a spring, or we just have not found any First Temple mikvaot yet. In any case, by Second Temple times, going to the mikvah was a basic practice of all the different Jewish sectarian groups. Early Christianity took the technical idea of purity – if you are impure you cannot eat or do certain things – and gave it a spiritual twist with baptism.

Since purity laws were stringent and complicated, in some mikvaot the design was meant to ensure that the casual user did not impurify others unwittingly. There was a clear divider down the middle of the stairs – not a wall per se but enough of a marker to keep people from bumping into each other. A famous example is this one at the southern edge of the western wall: 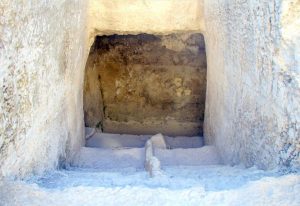 Here we see beautifully what Rabbi Meir is referring to – the way down is not the same as the way up! (Of course, which side is up and which is down is an interesting and unanswered question in our days, but they certainly knew that in ancient times.)

The most spectacular example of this phenomenon was discovered on the ancient Derekh haAvot, the Path of the Patriarchs. This was a route that went along the mountain ridge from Beersheba to Hebron, to Jerusalem and north to Shechem. Because that is the route most often used by Avraham, Yitzchak and Yaakov, it received the name Derekh HaAvot, Path of the Patriarchs: 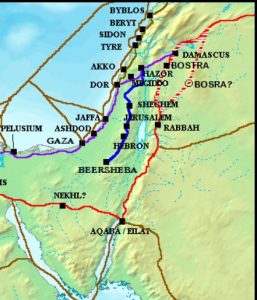 Part of this ancient road has been exposed in today’s Gush Etzion, between Alon Shvut and Neve Daniel. And on this road was discovered an enormous ancient mikvah with two beautiful openings: an entrance and an exit: 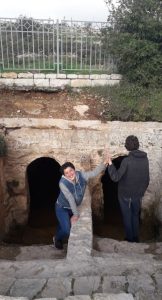 Two olei regel demonstrating what NOT to do (Shulie Mishkin)

Scholars assume that as this mikvah was literally on the road, less than a half-day’s walk to Jerusalem, it was used by olei regel, pilgrims coming to the Temple who needed to purify themselves. An added advantage to dipping here, as opposed to in Jerusalem, is that by the time you arrived in Jerusalem it would be nightfall and you would be pure, as per the law in some cases that says that the impurity only ends when the day ends.

I am particularly happy to finish Shekalim with this post because this is one of the first sites that I saw that really emphasized to me the concept of אין תורה כתורת ארץ ישראל, there is no Torah like the Torah of the land of Israel and seeing is not only believing, but also understanding. That insight was given to me by a wonderful teacher and colleague, Aryeh Rotenberg, and this post is dedicated to him. Thanks Aryeh!