Here is a short demonstration of weaving. I wanted to show you how threads become cloth.  Weaving is generally a two handed operation but I had my phone in one hand, so I was essentially weaving with one.  It’s not a very efficient process, however, and makes the cloth uneven.  This reminded me that my cousin Chana Lockshin Bob once asked me whether a woman needs one or two hands for weaving based on the following story from Masechet Gittin 34a. (text taken from Sefaria.com).

So as you can see, two handed weaving is recommended for many reasons! 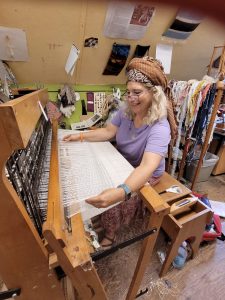