Sukkah daf 29 brings to an end two intense chapters on sizes, shapes and styles of sukkot. We talked a lot about s’chach, imagined very small and very large sukkot and delved into the concept of imaginary walls, or at least imaginary continuations of walls. Perhaps the most memorable images the learner comes away with from these chapters are the, shall we say, non-standard sukkot. A sukkah on a ship, on a camel, using an animal as a wall for the sukkah – so many strange scenarios, some of which seem to be merely products of the rabbis’ imagination and their love of stretching boundaries.

But someone thought to make most of these sukkot real. To actually build a ten tefachim high sukkah, a sukkah in a tree and a sukkah with a wandering donkey as one of its walls. This of course is the fabulous sukkah exhibit in Neot Kedumim. The most fun you can have with Masechet Sukkah is to go to Neot Kedumim, preferably with a fourth or fifth grader along, and walk around checking out which sukkot are kasher and which are pasul. It is an amazing review and they include most of the options in the Gemara, although sadly not the one with an elephant wall (probably too dangerous for the kids, as well as cruel to the elephant). 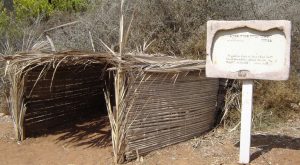 But let’s go back to the beginning. What is this place, how was it created and what is its purpose? To understand that you have to go back to the early days of the twentieth century, before the State of Israel was born. One mode of Zionist expression was understanding the roots of the Jewish people in the Land of Israel. The realization that we had returned and had an incredible opportunity to connect to the language and imagery of the Bible was a powerful one and scholars set out to uncover the botany and zoology of the land. Two of these pioneering scientists were Ephraim and Hannah HaReuveni. They were among the founders of the botany department in the new Hebrew University and they spent a lot of time identifying and classifying plants of the land, hiring an artist to draw them and collecting them in their lab in the university. They dreamed of creating a “Garden of the Prophets and the Sages.”

Their son Noga followed in their footsteps. He served in the young Israel Defense Forces in “field education,” mapping out roads, water and plants. He wrote a seminal work on the Biblical book of Jeremiah where he explained the imagery and language of the prophet based on his surroundings in Anatot, on the edge of the Judean desert. He was basically the originator of a style of learning that we take for granted nowadays – in order to understand the text you must understand the context.

Noga HaReuveni wanted to fulfill and expand his parents’ dream of creating a nature reserve that would feature the flora and fauna of the Bible and the Mishna. A place that would include living exhibits of the seven special species of the Land of Israel and show how they were used, grow the various kinds of etrogim the Mishnah discusses and even cultivate the thorn bushes that the prophets use in their metaphors. He bought a barren piece of land near what is today Modiin and envisioned this incredible park. A friend of mine recalls going with him in the mid-1960s and his description of what he saw in his mind’s eye- a lake, a grove of olive trees, a garden with plants from the Song of Songs. It all came to fruition through much hard work. In 1994 HaReuveni won the Israel Prize, Israel’s highest civilian honor. 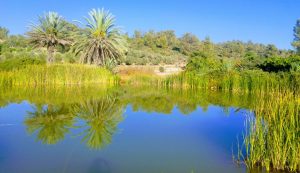 The lake at Neot Kedumim (Wikipedia)

HaReuveni also wrote books about nature and the Bible where he explained the significance of the seven species, how Shabbat brings the Temple into your home, and many other powerful ideas. But the park excels at experience, not only scholarship. The goal of Neot Kedumim is to bring the text alive. You can join a shepherding experience and understand why almost all our early leaders were shepherds first – if you manage to get those ornery goats to go in the right direction, you may even succeed with the Jewish people. There is a Biblical cooking workshop that of course does not use tomatoes, potatoes, chocolate or other new world foods. A display of the oils you can use to light your Shabbat candles brings the Mishnah alive.

The sukkah exhibit is a perfect example of learning through experiencing. You can read about Queen Helene’s incredibly tall sukkah and even see a drawing of it but that is hardly the same as looking up at the towering edifice, two stories tall. Seeing a donkey tethered and the rest of the sukkah built around him you grasp just how impractical this idea is – he could run away, just as the Gemara discusses. A personal favorite is the sukkah on the boat, moored in the middle of HaReuveni’s lake. You can just imagine Rabbi Akiva and Rabban Gamliel having their conversation about whether a sukkah on a boat is legitimate. 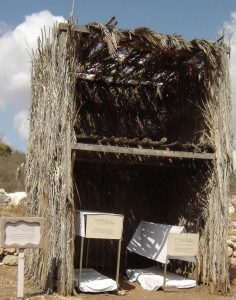 Sukkah on top of a sukkah in Neot Kedumim (Wikipedia)

The symbol of Neot Kedumim is the caper flower. The Gemara in Shabbat describes the caper as עז, brazen, or perhaps we would say chutzpadik. It grows in the most inhospitable places, out of walls (capers are what grow out of the Western Wall) and if you cut it back it returns larger than before. The rabbis compared the brazen caper to the Jewish people, always hanging on to life under the most desperate circumstances, always returning to flower again. A fitting symbol for a park that celebrates our return to this land after centuries of exile. 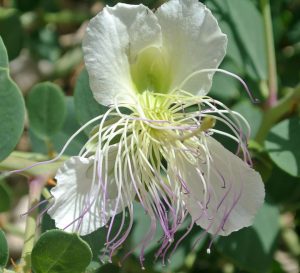