What Have We Lost?

The date is Nisan 71 CE. You are one of the lucky survivors of the Great Revolt and the horrific destruction that came in its wake. And yet you don’t feel very lucky. How can it be possible to celebrate Pesach this year? Pesach’s essence, as we have been discussing for many, many pages already, is the Passover sacrifice offered in the Temple. The whole holiday revolves around it – getting to Jerusalem, making sure you are part of a group, offering the sacrifice, and then eating it together with your family while reciting Hallel that “raised the roof.” What kind of Pesach can there be without a Temple? 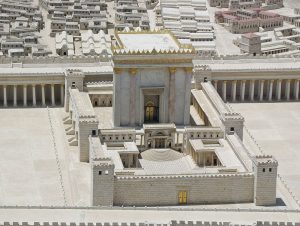 This was the tragic circumstance that the rabbis of Yavneh had to deal with in those first years after the Temple was destroyed in the year 70. A Pesach without a sacrifice must have been inconceivable to most people. Perhaps there was a danger of losing the celebration altogether. The rabbis bravely came together and took what could be salvaged: the commandments to eat matzah and maror, to tell the story and to sing the Hallel – and created a new “seder,” an order for the evening. This seder, as we have seen, took elements from the Greek/Roman symposium but imbued them with deep Jewish symbolism and content. 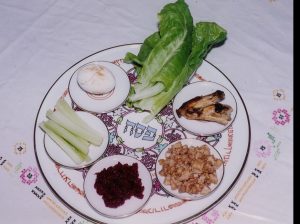 The focus was on education. The children needed to be kept awake and asking questions. It seems unlikely that even the most apathetic children needed to be prodded awake on Pesach night in the time of the Temple. There was so much to see and notice! Who needs a “mah nishtana” when everything is different from the familiar. But in the house, things had to be changed from the normal “boring” holiday celebration so that they would ask questions.

The seder, which is laid out here in our tenth chapter of Pesachim, is well planned, with breaks for drinking, eating, teaching and praising. The rabbis mentioned in this chapter: Rabban Gamliel, Rabbi Akiva, Rabbi Tarfon, Rabbi Eliezer ben Zadok – are almost all from the generation of Yavneh, the site of the Sanhedrin right after the destruction of the Temple. However, even with the best efforts of the rabbis to create an “alternate” Pesach celebration, the loss of the Temple was felt keenly. One way to ease that loss was to eat a meal similar to what was eaten in the Temple. The Mishnah in tells us:

The Mishnah is talking about the era after the Temple has been destroyed. Could one eat roasted meat, like what was eaten in the Temple, in his own house? Today most communities do not do this but the Mishnah is familiar with a situation where people did eat roasted meat, in memory of the sacrifice. In fact, as great a leader as Rabban Gamliel did so, against the majority opinion, after the Temple was destroyed. (Betzah 2:7) What is the problem that the rabbis have with such a custom? While on the one hand it seems like a beautiful way to perpetuate the tradition of the Temple, it also looks like we are making a sacrifice outside the Temple, something that is forbidden.

A similar problem arose during Temple times. We have testimony that Todos, a resident of Rome, roasted a goat and told the other Roman Jews to do so as well (Pesachim 53). The rabbis got angry with him because it looked like a sacrifice outside the Temple. Here the situation is that the Temple is standing, however these Jews are far away. To assuage their loneliness at not being able to be in Jerusalem, they ate a “Temple-like” meal.

According to Zeev and Shmuel Safrai, this custom of eating roasted meat persisted in the land of Israel for many generations after the Temple was destroyed. Their evidence is haggadot from the Cairo Genizah that include the question in the mah nishtanah about how we eat all roasted meat tonight, a question we no longer ask. One haggadah even had a blessing that said blessed are you God Who commanded us to eat matzah, maror and roasted meat.

Jews eventually got used to the situation of a seder at home, and the idea of a sacrifice and Temple seemed strange. In that sense, the rabbis did too good a job. We pray at the end of the seder “next year in Jerusalem!” but it seems unreal to us. Rabbi Yoel Bin Nun in a seminal article from a few decades ago, calls on us to understand what we are missing. Pesach without the Temple (like Yom Kippur, his other example) is missing its very essence, its very soul. We have lost the “Chag haPesach,” the holiday of the sacrifice on the 14th of Nisan, and are left only with the “Chag haMatzot,” the week-long abstaining from chametz. We need to return to the air of Jerusalem and the Temple.

Let’s finish up Masechet Pesachim with the prayer we recite at the end of the Maggid section of the Haggadah:

Blessed are You, Lord our God, King of the universe, who redeemed us and redeemed our ancestors from Egypt, and brought us on this night to eat matsa and marror; so too, Lord our God, and God of our ancestors, bring us to other appointed times and holidays that will come to greet us in peace, joyful in the building of Your city and happy in Your worship; that we shall eat there from the offerings and from the Pesach sacrifices, the blood of which shall reach the wall of Your altar for favor, and we shall thank You with a new song upon our redemption and upon the restoration of our souls. Blessed are you, Lord, who redeemed Israel.