“A certain heretic said to Rabbi Yehuda: Your face is similar either to usurers or to pig breeders. Rabbi Yehuda said to him: Both are prohibited to Jews. Rather, my face is ruddy because I have twenty-four bathrooms on the way from my home to the study hall, and all the time I enter each and every one of them.” (Nedarim 49 b)

Bathrooms, what would we do without them? Toilets of course are ubiquitous in our modern world. But finding ancient ones is a little trickier. In Biblical times and even later, only the wealthy had an actual toilet in their home. Hence the well- known Gemara “who is rich? He who has a toilet next to his table.” (Shabbat 25b) (The other ending to the saying, “he who is content with what he has” is much less memorable.) Anyone who has been on a tour to the City of David may not remember all the archaeology or the Bible stories that they heard but you can bet that they remember the toilet, prominently on display in the House of Ahiel, a two-story home from Jerusalem of First Temple times, with a lovely stone toilet. A similar one was discovered recently in the remains of a palace near the promenade in Armon HaNatziv. 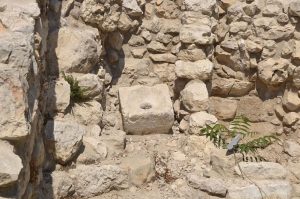 Toilet in the City of David (Wikipedia)

A very different kind of toilet was recently uncovered in Tel Lachish, one of the most important cities in Judea in late First Temple times. A six-chambered gate had been discovered decades ago but only half of the rooms had been excavated. In a recent dig, the other three rooms were uncovered. They contained classic items that one would find in a gate like a room for tax collection and a mini temple. Deep in the temple, alongside a small altar, was an (unused) toilet. Placing it there meant that as part of King Hezekiah’s religious reform, the temple was defiled by putting a bathroom in it. This is something that the Bible mentions in the context of Yehu’s religious reform in the Kingdom of Israel:

“They destroyed the pillar of Baal, and they tore down the temple of Baal and turned it into latrines, as is still the case.” (Kings II 10:27)

The concept makes sense but we have not found evidence of it, until now. 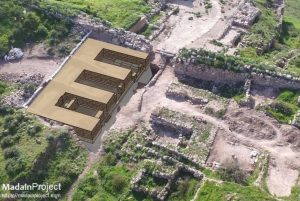 By the time we get to the late Second Temple period, we are in the Roman era. If there was one thing the Romans did well, it was plumbing. Public toilets have been found at the foot of the Temple Mount, in the Roman Legion camp. However, we have not found them (yet) in the Second Temple layer of the site. The Mishnah does talk about a private toilet under the Temple Mount, for the use of the high priest. It was unusual in that it had a door that could be closed, thereby gaining it the name כסא הכבוד, the seat of honor.

Roman cities like Bet Shean had large and impressive public toilets, right in the center of town. They even flushed – a canal ran under the toilets, washing away any refuse. Other toilets have been found from this period in a few private homes, like in Caesarea. 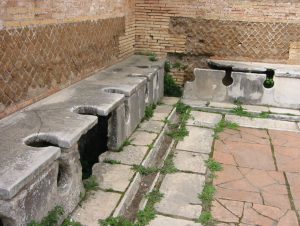 As with every other aspect of life, the rabbis had opinions on toilet etiquette and health. Some seem surprisingly progressive for their time – the need to go frequently and not restrain yourself, the importance of cleaning oneself afterwards. Others belong to the realm of demons and magic, which were thought to be particularly prevalent in an isolated setting like an outhouse:

“There was a particular bathroom in the city of Tiberias, where, when two would enter it, even during the day, they would be harmed [by demons.] When Rabbi Ami and Rabbi Asi would each enter alone, they were not harmed. The Sages said to them: Aren’t you afraid? Rabbi Ami and Rabbi Asi said to them: We have learned: The tradition to avoid danger in the bathroom is to conduct oneself with modesty and silence.” (Berachot 62a)

There was even a prayer that one was meant to say to tell the angels that accompany one everywhere to wait outside and not enter the toilet with you.

As time went on, toilets changed as well. In the Crusader fortress in Akko, a whole room was dedicated to latrines for the soldiers. Here there was a flushing mechanism as well. When the archaeologists excavated it, they wanted to know where the water ended up. They dyed water and then saw how it emptied into the sea. Sophisticated indeed. 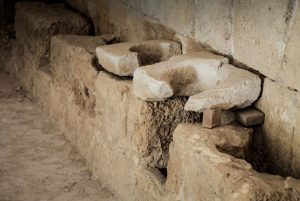 In Ottoman times most people reverted back to chamber pots (emptied into the streets) or outhouses. Outhouses still existed in Mandate times and even after the founding of the State of Israel. A famous story from when Jerusalem was divided between Israel and Jordan involved an outhouse. An Israeli with a house right near the border was fed up with his outhouse and decided to build a modern bathroom as an addition to his home. But Jordan claimed that the expansion would be in no-man’s land, not Israeli territory. The case was taken to court and not resolved, but the homeowner built his bathroom anyway.

Today, fortunately, the squalid bathrooms of a few decades ago are mostly gone. However, those of us who spend a lot of time on the road may well pine for Rabbi Yehuda’s twenty-four bathrooms between home and the study hall. 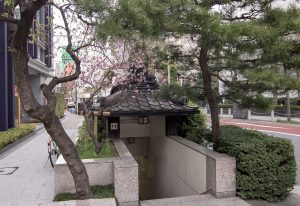