Ask a Jew today what is THE symbol of the Jewish people and chances are she will say the Magen David, the star of David. Ask in earlier times and the answer is likely to be the menorah, a classic Jewish symbol for millennia. But how many people would answer the four species that we are commanded to take on Sukkot? Probably not too many. But if you look back at art and coins from Roman and Byzantine times, the four species play a prominent role. Why is that and what do we know about these species?

The Torah commands us to celebrate Sukkot by not only bringing sacrifices and building a sukkah but also by taking four types of plants:

“On the first day you shall take the product of hadar trees, branches of palm trees, boughs of leafy trees, and willows of the brook, and you shall rejoice before the LORD your God seven days.” (VaYikra 23:40)

There are a few issues with this verse and with what we know about the four species. First and foremost, the commandment seems to be only for the first day of Sukkot. And indeed that is the Biblical commandment. In Temple times, the four species were taken every day in the Temple but only on the first day everywhere else. After the Temple was destroyed, one of Rabban Yohanan ben Zakkai’s decrees was that they should be taken everywhere all the days (Sukkah 41a). This was an important way to bring the Temple into daily life.

The second problem, somewhat obscured by the English translation, is what exactly are these four plants? Palm trees are easy as are willows (although they too have several varieties) but what are leafy trees – aren’t most trees leafy? And most puzzling, what is a hadar tree, עץ הדר?

It is not known at what point the four species became universally know as the lulav, etrog, hadas (myrtle) and arava (willow) but it is clear that by the time of the rabbis these identifications were set in stone. Our sages, as is their custom, want to find proof in the Biblical verse for these choices. They bring various explanations, the most amusing one is how to make hadar equal etrog. The Gemara on Sukkah daf 35 begins by saying that the tree and the fruit of the etrog taste the same, a point elaborated on in the Jerusalem Talmud. It then goes on to give a multitude of etymologies to explain hadar and link it to the well known etrog:

Any time you have multiple meanings or reasons for something, chances are good that the real reason is unknown. So too with the case of the etrog. At some point after the Torah was given, hadar came to be defined as etrog. That original clarification, whether it was told to Moses or happened later, is unknown to us.

Another fascinating suggestion, not connected to what hadar means but rather to the nature of the etrog, is that the etrog is the Tree of Knowledge in the Garden of Eden. In Pesikta Rabati there are a number of possible identifications for this tree – wheat, grapes, figs – but Rabbi Abba from Akko says it was an etrog.

The four species, as mentioned earlier, were very important in Temple worship. We know this not only because they were taken daily there, as opposed to once in the rest of the world, but also because they appear in depictions of the Temple. After the Temple was destroyed, the Jewish people continued to show their yearning for Temple worship by depicting it on physical objects. These included coins in Bar Kokhba times and synagogue floors in the Byzantine period and even later. The classic pictures included the menorah, perhaps some animals for sacrifice, and . . .  the four species. This seems to have been a symbol of the Temple, rather than a symbol of the Sukkot holiday. So on a coin minted in the Bar Kokhba revolt, one side depicts the façade of the Temple and the other side shows the four species (note the rather large etrog): 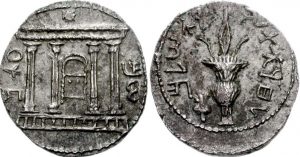 The synagogue in Hamat Tveria shows the lulav and etrog alongside other Temple symbols, as does the one in Zippori: 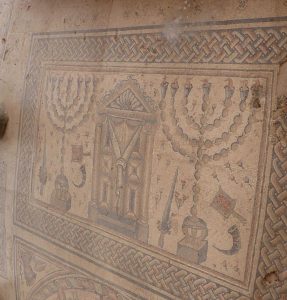 And the well known Shalom al Yisrael synagogue in Jericho places the lulav prominently next to the menorah: 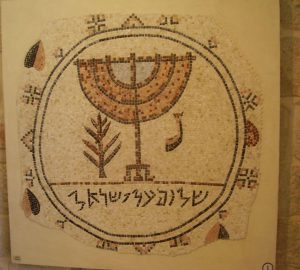 All these show the deep connection Jews made between the four species and Temple worship. The species are also very much a symbol of the land of Israel. These species, particularly the etrog and lulav were not always easy to get outside of Israel. The date palm is often considered a classic symbol of Israel, so much so that when the Romans decided to make a coin celebrating their victory over the Jews, it shows a triumphant Roman soldier standing next to a Jewish woman, weeping, on the ground. The image in the middle? A date palm, symbolizing the Judea of Judea Capta: 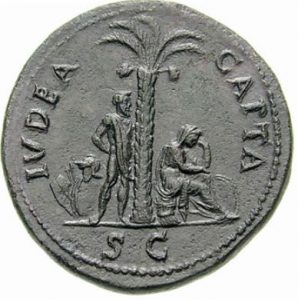 The four species were so well known and so prominent that the midrash in Vayikra Rabba has a fun time playing with metaphors for them: they are the four mothers (arava  = Rachel since it wilts easily and she died young), the four fathers (three plus Joseph), and different body parts (lulav = spine). The most famous comparison is to various types of Jews: some have smell and no taste, i.e., good deeds but no Torah, some the opposite. The etrog has both and the arava has neither. The midrash ends by explaining that therefore all the species, and all the Jews, must be tied together, so each one can complete what is missing in his friend:

From Temple to Jewish people, the four species are not just colorful fruit but symbolize a belief in unity and redemption 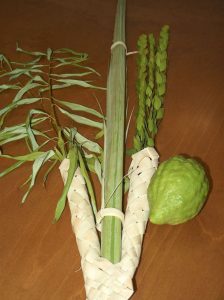