I know that designer ketubot have been popular for centuries but a get (bill of divorce) is a very meticulous but undecorated object. Today the formula for writing a get and what it is written on is very fixed but in the time of the Gemara it was much more fluid and the halacha  is that  anything that can be written on, can be used. This extends to a cow’s horn or a slave’s hand, as Maimonides states (Mishneh Torah, Hilchot Gerushin 4:3).

We will have plenty of time to talk about divorce when we get to Masechet Gittin. But meanwhile, it is interesting to examine possible writing materials. The living animal as text seems to be an extreme and unlikely case, one that is used as an exaggeration. But living skin is indeed used for writing, as the plethora of tattoos you see around today exhibits. 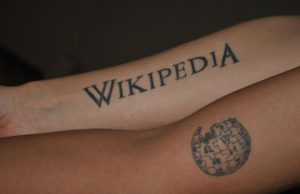 Ever since writing began in our area, common materials were used to write on. Writing developed in Mesopotamia where mud and clay are prevalent. Therefore, the earliest forms of writing we have are on clay tablets, with shapes made by pressing a reed into the wet clay. This is called cuneiform and it can last for a very long time, but it isn’t very easy to read and can’t be sent off quickly since it needs to dry in the sun. The tablets were also rather heavy. However, we do have some treasures of ancient Near Eastern literature written on clay tablets, like the library of Ashurbanipal. This 7th century BCE collection of much older literature, amassed by the Assyrian king Ashurbanipal, was discovered in the ruins of the city of Nineveh in the late 19th century and it includes the first known copy of the Epic of Gilgamesh. Today these treasures are in the British Museum. 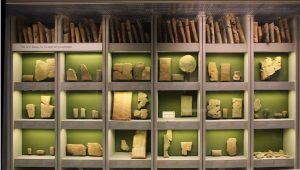 The Egyptians used what was available to them and their material was lighter and worked very well to keep the ink on it. This was papyrus, a type of material made from reeds. The laborious process of turning a plant into paper is nicely described and illustrated here http://blogs.getty.edu/iris/how-to-turn-papyrus-into-paper/

Papyrus was such a great writing material that it was used for millennia. But it was hardly the only type of material. In the land of Israel as well as other parts of the ancient Near East, a great handy piece of writing material was old broken pottery. You may not have used it to write an important document but it was useful for drafts, notes and even letters. The official term for potsherds with writing on them is ostraca and we have some amazing examples of it from First Temple times. The letters found in the city of Lachish were written on ostraca and they describe how the cities around were falling one by one to the Babylonian conquerors in 586 BCE. Another set of ostraca from Biblical times were the ones found in the fortress of Arad. Besides their content, they are fascinating because they were analyzed and the handwriting is different on different ones. Even in a remote outpost in the desert, there was more than one person who could read and write! 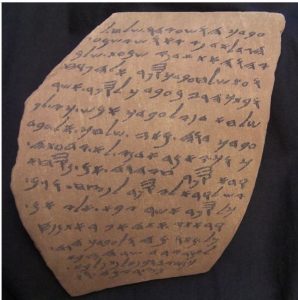 Pottery was also written on when it was whole. We have incantation bowls or demon bowls from Babylonia.  dishes that had curses inscribed all over them. They were buried in the earth and were meant to keep away the demons. The rabbis mention these and we will discuss them further when we get to Gittin. 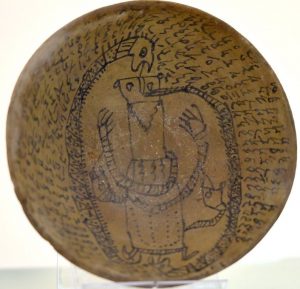 In the time of the Mishna people were still writing on papyrus but a new material had come to market, one that is still significant to Jews today. This is parchment, made out of animal skins. It cost much more and was hard to make but the result was soft and flexible. Therefore it could be made not just into scrolls but also books, which are much more convenient when you want to flip from one part to another. Of course we still use parchment today for holy objects: tefillin, mezuzot and Torah scrolls.

The most famous ancient texts discovered in the land of Israel are the Dead Sea Scrolls, with the letters found in the Bar Kokhba caves in the Judean Desert a close second. Both of these were mostly written on papyrus and parchment but we have a few exceptions. Some Bar Kokhba letters (2nd century CE) were written on wood. They survived against all odds and were still readable. A famous Dead Sea Scroll is called the Copper Scroll for the material it was written on. But these seem to be the exceptions. It was much easier, if more costly, to write on papyrus and parchment. Or a cow’s horn if it was handy. 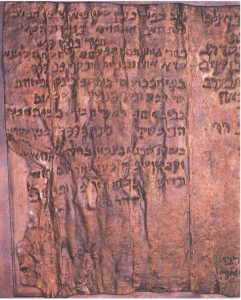