Although much of the Talmudic dialogue takes place among the rabbis, occasionally we hear an outsider’s voice. In the middle of a lengthy discussion about judgment and repentance, Beloreya appears:

“Come and hear: Beloreya the convert once asked Rabban Gamliel: It is written in your Torah: “The great, mighty, and awesome God who favors no one” (Deuteronomy 10:17), and elsewhere it is written: “The Lord shall show favor to you and give you peace” (Numbers 6: 26).” (Rosh HaShanah 17b)

Beloreya, whose name may have been the Latin Valeria, is one in a long line of non-Jews, often women, who ask hard questions of the rabbis. In this case her question is why does it seem that God sometimes favors people and other times does not. Rabbi Yossi answers her that the distinction is between someone who sins against God and someone who sins against man. God can forgive/favor someone who has sinned against Him but He can do nothing about someone who has sinned against his fellow man. In that circumstance, the sinner has to ask forgiveness from the person he has wronged; God cannot get rid of his guilt. Interestingly, the Sifrei puts the same question in the mouth of the rabbis but there the answer is different – in this world God will gloss over your sins, but in the next world He will punish you.

Belureya does not only appear in our Gemara. She also shows up in the tractate of Yevamot where she is used as a test case for what happens to the slaves of a convert when he or she becomes a Jew:

“There was an incident involving Beloreya the female convert in which her slaves preempted her and immersed before her own immersion for her own conversion. And the details of the incident came before the Sages, and they said: The slaves acquired themselves and became freemen.”(Yevamot 46a)

Beloreya’s slaves were clever. They knew that if they converted first they would be free since a Jew cannot be a slave to a Gentile. If she converted first, they would still be her property. So they beat her to it and gained their freedom. The Gemara goes on to discuss the details of the case but for our purposes it is interesting to note that Beloreya, besides being interested in Judaism, is clearly a wealthy woman. She owns quite a few slaves and is prominent enough that her case is well known. We hear about other wealthy women who encounter the rabbis. These are the matronitot, the Roman “matrons” who come and ask the rabbis questions about Judaism. Rabbi Yehoshua is quizzed by an emperor’s daughter, Rabbi Yose ben Halafta is challenged by a wealthy Roman woman to explain what God does with his extra time. Where do they get their knowledge from and why are they so interested in Judaism? 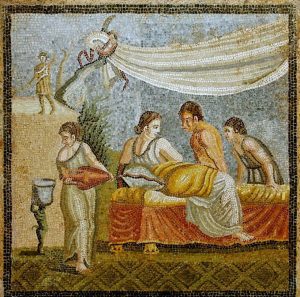 A Roman matron depicted in a first century mosaic (Wikipedia)

While we often think of the Roman world, and the non-Jewish world in general, as anti-Semitic, there were many exceptions. Conversion was the most extreme example of philo-Semitism but there were many non-Jews who feared/admired/loved Jews without taking the ultimate step of joining the Jewish people. Dr. Shaye J.D. Cohen in his book The Beginnings of Jewishness, speaks about the phenomenon of God fearers, Gentiles who fell somewhere on this spectrum. Josephus as well as some Roman writers refer to Gentiles who kept some of the Shabbat laws or fasted on Jewish fast days. They did not go so far as to become Jews but they were certainly in the camp of Jewish sympathizers. Dr. Cohen even refers to synagogue inscriptions that list Jews alongside “God venerators,” people who were not Jewish but somehow were involved in the synagogue. And of course some did take that leap of conversion and joining the Jewish people.

One of the most famous women to convert to Judaism, along with her sons, was Queen Helene of Adiabene. She became so influential that she appeared in various places in Rabbainic literature, always doing praiseworthy things – helping the poor, donating to the Temple, taking a Nazirite vow. 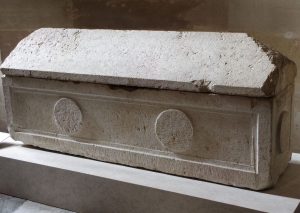 The tomb of Queen Helene (Wikipedia)

How were these outsiders accepted by the rabbis and by other Jews? Alongside statements praising conversion and holding up model converts like Ruth or Queen Helene, we also note that they are still referred to as converts, i.e. Beloreya the convert. The Mishnah even goes so far as to suggest that converts should not say “God of our fathers” but God of your fathers:

“These bring [bikkurim] but do not read the declaration:The convert, since he cannot say: “Which the Lord has sworn to our fathers, to give to us” (Deuteronomy 26:3). If his mother was an Israelite, then he brings bikkurim and recites. When he prays privately, he says: “God of the fathers of Israel,” but when he is in the synagogue, he should say: “The God of your fathers.” “(Mishnah Bikkurim 1:4)

Despite the fact that converts may never have fully integrated into the Jewish community, Judaism held great appeal for some people. Why?  For that we have to look at the values and culture of the ancient world, particularly of ancient Rome. A Roman who had money and property and was male lived the good life. No one else did. All other people were created to serve the Roman master. Life, to quote Thomas Hobbes, was nasty, brutish and short with no deeper meaning or hope for redemption. Roman culture was a beautiful material façade with nothing on the inside. Judaism provided spiritual content: a belief in a just God and a conviction that all people were created in God’s image and had inherent value. This was powerfully enticing to the disenfranchised but also to wealthy and pampered women searching for something more meaningful in life than partying and bringing offerings to pacify the gods.

And that perhaps is the key to Beluriya/Valeria’s question: she wants to know if God plays favorites, as the Roman gods do – if you are rich or connected He will overlook your sins but if not, you will be punished. Rabbi Yossi assures her that when it comes to how people treat each other, there are no shortcuts. Everyone must behave decently and no one can be forgiven without going to the person he wronged and asking for forgiveness. A powerful message in a world where people were so expendable that they were fed to the lions for sport.

What happened to all these God fearers and philo-Semites? A new religion, with powerful messages of redemption and justice and the promise of rewards in the afterlife, came along. Unlike Judaism, it offered all the benefits with none of the “costs” – circumcision, restricted diet, and other commandments. This religion of course was Christianity and it spread like wildfire through a spiritually starved Roman world. Judaism remained a small religion, but there were always certain men and women willing to take up its challenges in exchange for the rewards of joining Am Yisrael. 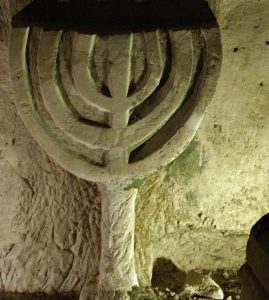