You Say Tomayto and I Say Tomahto

In a statement that would not pass muster in today’s politically correct world, the Gemara on Megillah 24 invalidates an entire population from giving the priestly blessing:

“Rav Asi said: A priest from Haifa or Beit She’an may not lift his hands” (Megillah 24b)

The Gemara continues, quoting a baraita that we also have in the Jerusalem Talmud in Berachot:

The Yerushalmi adds more details: they not only mix up their ayins and alefs but also their chets and heys. However, it also adds that if a specific Haifaite or Bet Sheani spoke properly, then he was allowed to lead the prayer service.

What is the big deal about mixing up ayin and alef? Don’t these letter sound more or less the same? Well, to us maybe, but speak to a Yemenite Jew and you will hear a distinct difference between an alef and an ayin. And as Rashi explains, mixing up the letters can cause trouble: if you replace the alef of ויאר with an ayin you get ויער – instead of lighting up you get curses.

Pronunciation is important. It determines what words mean. Now think about pronunciation in a primarily oral culture, where some people may know how to read but most rarely see a written text. It becomes even more important to say the words correctly. But correct may have been different in different places. Just like today when people have different accents depending on where they are from, this was true in ancient times as well. Jews in Babylonia said certain things differently – Rabbi Hiyya on our daf has trouble pronouncing the guttural chet, like many American Jews today. Even in Biblical times, when all Israelites lived in the same country, we had different ways to say words. Just look back at the famous story of the people of Ephraim who could not say the shin sound and instead of shibolet they said sibolet (Judges 12:5-6).

In Talmudic times, even Jews in the land of Israel pronounced things differently depending on where they were from. Our Gemara singles out the people of Bet Shean, Haifa and Tivon. Where are these places and why was there enunciation more lax than that of Jews in other towns?

Bet Shean is probably the most well known of the three locations. A prominent Roman town located in the Jordan Valley, its incredible remains have been excavated in recent decades and are the best example of a well built and planned Roman city in the Land of Israel. Alongside the theater, hippodrome and public baths lived a Jewish community. We have found remains of their synagogues and they are mentioned in the Gemara. The cosmopolitan mixed city of Bet Shean was not always a friendly place for Jews but they survived there nonetheless, living alongside pagans and Christians, while trying to keep their traditions alive. 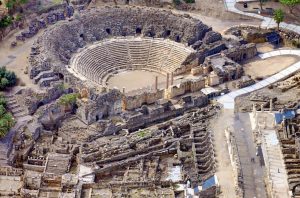 Aerial view of the theater in Bet Shean (Wikipedia)

Modern Haifa is well known, ancient Haifa less so. There were a few towns in the vicinity of today’s Haifa, among them were the Jewish towns of Shikmona (on the coast), famous for its dyeing industry, and the town of Haifa. Ancient Haifa today is more or less where Rambam hospital is, at the northern edge of the city, and very little remains of it. There are some burial caves and a tradition locating the grave of Rabbi Avdimi, Haifa’s most famous amora, in the area. 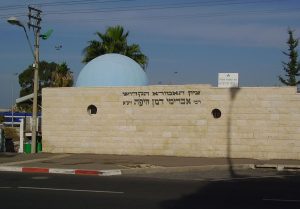 The suggested site of Rav Avdimi of Haifa’s grave (Wikipedia)

The Haifa area also housed another town, built by the Romans. It was known as Castra and it was south of Shikmona. Literary sources describe it as populated by Samaritans and hostile to Jews. Archaeology shows it to be a wealthy Christian town, so far no evidence of Samaritans has been discovered. In any case, the Jews of Haifa were also living among non-Jewish, not always friendly neighbors. Tivon is in the Jezreel Valley, right near Bet Shearim, the town of Rabbi Judah the Prince. We do not know much about it although some Jewish burial caves have been found there.

What do these three places have in common? They are all located in the Galilee and the Gemara in Eiruvin tells us that Galileans are not precise in their speech, picking again on the issues of alef and ayin, het and hey:

The people of Judah used Hebrew more regularly (as we can see from synagogue inscriptions) and were therefore more familiar with it.  The Gemara naturally finds this praiseworthy. Galileans were more prone to error since they were less likely to speak Hebrew (see last week’s post about languages). The Gemara goes on and describes a scenario where the Galileans’ sloppiness would lead to derision:

“that there was a certain person from the Galilee who would walk and say to people: Who has amar? Who has amar? They said to him: Foolish Galilean, a donkey [ḥamor] to ride, or wine [ḥamar] to drink, wool [amar] to wear, or a lamb [imar] to slaughter.” (Eruvin 53b)

The confusion arises from the mispronunciation -is he saying amar with an alef? An ayin? A chet? Each one is a different word and therefore no one can understand the poor Galilean.

But is this true of all Galileans? Clearly the Sages who lived in Bet Shearim, Tiberias and Zippori were not imprecise in their language. Perhaps the Gemara singles out Haifa, Bet Shean and Tivon because these are mixed cities without a strong Jewish presence. There was no one to teach proper pronunciation so it was lost. But in the towns where the rabbis lived, education was better and so language was better as well.

A telling example of this is a famous mosaic discovered in Tel Rehov, not far from Bet Shean. It deals with the borders of the land of Israel and what is permitted and forbidden during a shmitta year. It is a rare example of a written and not only  an oral  baraita. And guess what? Some of the alefs and ayins and chets and heys are mixed up. 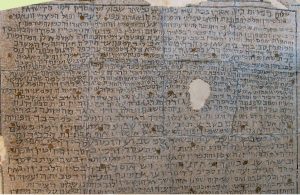