Till Death Do Us Part

Deep in the middle of our chol hamoed work conversations, we get a small hint of what the last third of Masechet Moed Katan is about: death and mourning. In the context of discussing what can and cannot be done on chol hamoed, we have two mishnayot that talk about preparing burial sites:

“Rabbi Meir also stated: A person may gather the bones of his father and mother

How did people bury in ancient times? Let’s explore that idea in this post. Just a note before we begin, most of what is being discussed here was relevant to what we would call today the “one percent,” the truly wealthy and connected people. Ordinary folk did not have the resources for an elaborate burial and their families usually buried them in a field somewhere. That is why we hear about the rabbis having to mark graves before holiday times (Moed Katan 5a as well as in Shekalim), so that people going to the Temple did not become accidentally impure. Graves were everywhere, not just in one specific area.

Although we tend to think of burial as something very conservative where the rules never change, there have been transitions over the centuries. We see this both in archaeology as well as in the terminology and laws about burial in our sources. In Biblical times, the common way to bury was in a family burial cave. We know this from the common way of describing death in the Bible: and he was gathered onto his forefathers.

“And Abraham breathed his last, dying at a good ripe age, old and contented; and he was gathered to his kin.” (Bereshit 25:8)

While this may just sound like a poetic way to talk about death, it is also literal. In ancient times a wealthy family would make a family burial cave, a mausoleum. It had shelves on which to lay the bodies out. The bodies were placed on the shelves until they decomposed and then the bones were gathered and placed in a compartment inside the cave. No one worried about the bones being jumbled up together. We know that this wasn’t an issue by looking at the prophecy of Ezekiel about the dry bones (chapter 37). When God commands the bones to get up and become flesh and blood again, no one is concerned about whose bones belong to whose body.

Besides the biblical prooftexts, we have found caves in Israel that show this process beautifully. The most well preserved in Jerusalem was discovered by Dominican priests who built a church called St Etienne north of Damascus Gate in the late 19th century. They decided to dig out a crypt to bury members of the order. In the process they uncovered a much more ancient burial space – a cave from First Temple times! It is almost fully intact and contains six chambers around a central space. Each chamber has shelves and an area for bones. The walls are finished with beautiful detailing and everything is almost as it was when the cave was dug out about 2700 years ago. 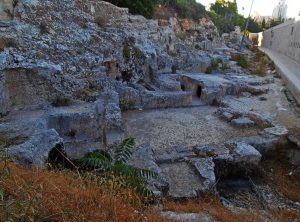 Shelves in the remains of burial caves in Ketef Hinnom (Wikipedia)

By Second Temple times, the individual had become more important. We see this in an emphasis on individual prayer, study and . . . burial. The new “trend” in burial was still a two-step process. But here, after the bones were gathered, each person’s bones went into an individual “bone box,” an ossuary in English and gluskema in Greek/Hebrew. Ossuaries were small boxes (as long as the femur, the longest bone), usually plainly but elegantly decorated, sometimes with inscriptions. Many have been found in Jerusalem as well as in other places in Israel. One inscription is lovely in its simplicity and in what it shows to be the priorities of the dead man. All it says, in Hebrew, is “Simon, builder of the Temple,” סימון בונה היכלה. 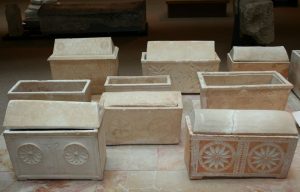 Ossuaries in the Hecht Museum (Wikipedia)

By the time that the Mishnah was edited, customs had changed again. Now most places dispensed with two stage burial and put people directly into sarcophagi, the ancient equivalent of our coffins. We have a magnificent display of sarcophagi in the necropolis discovered in Bet Shearim. People went all out to make the most elaborately decorated coffin to hold their remains. Things got so out of hand that the Gemara describes a situation where people would abandon their dead rather than pay for the cost of the funeral. 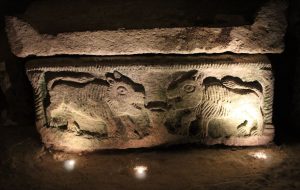 Of course, not everyone used sarcophagi. Some continued to hold on to the old customs and were buried in ossuaries, especially in the southern Hebron Hills. Some elected to be buried directly in the ground, like Rabbi Judah the Prince.

A fascinating example of a mix of styles is in Hirbet Burgin in the Elah Valley. Here a complete Second Temple period burial cave was discovered. It had niches and ossuaries as well as a מאספה, a common place for bones. Why the two systems together? One suggestion is that it was a two-tiered cave – the wealthy owner and his family were buried in ossuaries inside; the servants got the privilege of joining the “family” cave but their bones were all jumbled together in the common bone place.

What are our mishnayot referring to? Rabbi Meir is obviously talking about a time when people still commonly used ossuaries, hence they needed to gather the bones for the secondary burial. The second Mishnah talks about כוכים and קברות. Kokhim,  translated as crypts, are the spaces inside the cave meant for individual burial or for an ossuary. Kevarot, translated as graves, are the caves themselves. Neither of them can be prepared on chol hamoed for a future burial although they can be adjusted for a burial that is happening now. 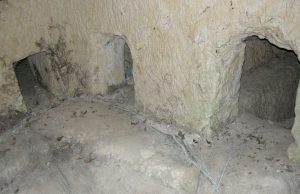 The next world may be a mystery to us but people’s beliefs and customs regarding it are all there to see, albeit sometimes buried in the ground.