We have finally begun the long awaited tenth chapter of Pesachim. After learning about all the ways one could licitly and illicitly own hametz, how to bring the Passover sacrifice and about purity and Pesach sheni, we are at last on familiar territory. The tenth chapter talks about the Seder night and while much has changed, much has stayed the same on this most traditional of nights in the Jewish calendar. Wine plays a large part in the Seder ritual and the first Mishnah in our chapter discusses how one must drink four cups of wine, even if charity is necessary to buy the wine. The Gemara continues with laws about Kiddush and Havdalah, as well as with many stories about rabbis sitting and having a meal together, meals that invariably included wine. As wine plays such an important part in the Seder, and throughout Jewish life, let’s take a look at wine in ancient Israel.

The Bible tells us that wine will “gladden the heart” and it is one of the three basic products that we pray for in the Shma: דגן תירוש יצהר , grain, wine (well, actually grape juice) and olive oil. These were the staples of the ancient world and they are still important today. Wine was a large part of the agricultural scene here in the land of Israel and ancient winepresses can be found that date from Canaanite times to the Byzantine period, centuries of wine making and drinking. Wine was also imported here from other places. Herod, a monarch with very fancy tastes, imported wine from Rome and some of the ancient jugs have been discovered in the remains of his palaces. 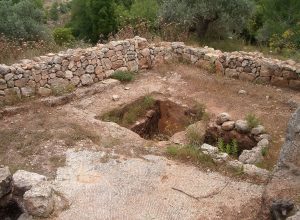 Winepress in Sataf in the Judean Hills (Wikipedia)

Wine is so important that it, unlike any other drink, it merits its own special blessing, בורא פרי הגפן, thank you God for creating the fruit of the vine. It is used to consecrate special days and it ushers the Shabbat in with Kiddush and out with Havdalah. Wine was poured on the altar of the Temple with certain sacrifices and because of that and also because of the many people who were super careful about purity in Second Temple times, we often find a mikveh next to a winepress. This way the workers could be sure that they were ritually pure before they engaged in winemaking. Near the enormous mikveh on Derech HaAvot in Gush Etzion is a small winepress and indeed there are grapevines growing all over the area. 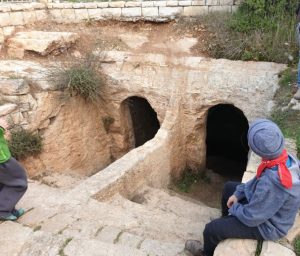 Wine also has a flip side, as we all know. Noah survives the flood and makes wine to escape his grief, becoming so drunk that he embarrasses himself in front of his sons. A Nazirite who wants to get away from the hedonism of the world for a while swears off wine. And there are many laws about wine and Gentiles, ensuring that Jews would not be tempted to drink, and then socialize with non-Jews. This was especially significant in the Roman world, where the cult of Dionysus and his bacchanalia held sway.

Wine was a part of everyday life and the rabbis were very familiar with it. Unlike today, when we have a plethora of drinks to quench our thirst and water is safe to drink in most places, in the time of the Gemara wine was the drink of choice. The wine was usually heavily watered so that even while drinking quantities of it, one could still keep his wits about him. The rabbis were familiar with long meals where different wines were brought out and discussed whether one needs to bless the wine again in the same meal.

Besides the many rules about drinking it, blessing it, and making it, the rabbis came up with some beautiful allegories about their favorite drink. One is that just as wine gets better with age, so do Torah scholars, so always seek out an older and more experience teacher. Wine was known to spoil in silver and gold vessels and only to keep well in clay vessels. Rabbi Yehoshua, not the most beautiful of the Sages, used this metaphor to a Roman princess when she asked why God would choose to put wisdom in such an ugly person. He advised her to take her father’s wine, kept in clay jugs and put it in vessels more befitting a king. When the wine spoiled in the silver and gold vessels, he explained to her that just as an ugly container keeps wine better than a beautiful one, an ugly person retains more wisdom than a beautiful one! 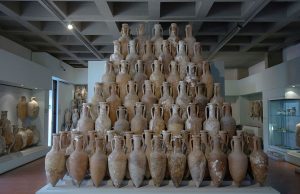 With the Muslim conquest of the land in the seventh century, wine culture pretty much disappeared. Muslims are forbidden to drink wine so they only grew grapes for eating. As there were fewer Jews and Christians in the land by then, centuries of wine knowledge was forgotten. Baron Edmund de Rothschild started the modern Israeli wine industry with the Carmel Mizrachi Winery in the late 19th century but Israel was definitely not on the wine lovers map. Today that is being rectified and there are dozens of high quality boutique wineries all over the country.

But what about the wine of ancient times – will we ever know what it tasted like? Dr. Shivi Drori is involved not just in the taste of wine but also in the science behind it. He founded a research center in Ariel University to study ancient viticulture and is making wine from grape species that were known in Biblical times. He is also involved in developing grapes that are resistant to drought conditions, something that can help farmers in many places. In his research, he has traveled throughout the land of Israel seeking out “feral” grapevines, that hold a clue to ancient varieties of grapes. After finding them, he has taken them back to the lab to analyze, and in some cases to grow them anew. The Gemara in Shabbat mentions wine made from Gordali and Hardali grapes. Arabs in Israel still grow grapes called Jandali and Hamdani, almost the same names. Israel wineries like Gvaot and Recanati are now starting to grow some of these grapes and create wines from them. There is also research on the archeological level, examining seeds and residue of grapes discovered in ancient sites.

Will your Seder eventually include wine just like that drunk by Rabbi Yehuda and Rabbi Akiva? Here’s hoping – l’Chaim! 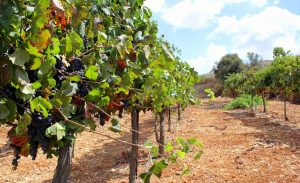