With the seventh chapter of Pesachim we finally hear about cooking the Passover sacrifice itself – we are getting closer to dinnertime! The conversations about the details of the roasting made me think of the one group that does still give the Passover sacrifice today, albeit not on the Temple Mount but on Mount Gerizim. These are the Samaritans, the Shomronim, and I think it will be fascinating to compare their methods with that of the Gemara.

First a quick summary of the law, from the Gemara by way of Maimonides in his Hilchot Korban Pesach. In the afternoon, after the second daily sacrifice תמיד של בין הערביים, is brought, the incense is given and the menorah is lit, we begin the sacrifices. The Mishnah (5:1) says we begin the process at seven and a half hours (early afternoon). After the animal is slaughtered, the blood is collected and sprinkled on the altar. The animal is skinned and its innards taken out and burned. Then the owner of the animal takes it and its skin and brings it to where he is staying in Jerusalem and roasts it and eats it with his havura.

The roasting method is the topic of our chapter. The lamb has to be roasted on a wooden, not a metal spit, over a fire, and not boiled or cooked with any liquid, it cannot touch the sides of the oven and it has to be a direct fire, not a fire that has been covered and gone out. Let’s see how all that compares with the Shomronim sacrifice.

The Samaritans are an ancient people who see themselves as the true Jews who stayed on the mountain that they believe is the real holy place, Mount Gerizim above Shechem. They believe the rest of the Jews went wrong early on when they built the Tabernacle in Shilo and certainly when they established the Temple in Jerusalem. Tanakh on the other hand sees them as descendants of peoples brought here by the Assyrians after they exiled the Ten Tribes. They began to keep Jewish law because they saw that those who did not keep the law were eaten by lions. The Jews who returned in early Second Temple times rejected them and later on they became a powerful minority and the rabbis had frequent conflicts with them. 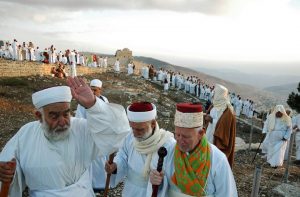 Today the Samaritans have dwindled greatly in number and now consist of two communities totaling about eight hundred people. Half the community lives on Mount Gerizim and half in the Tel Aviv suburb of Holon. They claim to have never gone into exile and they retain a version of the ancient Hebrew script for their writing. The Samaritans accept only the Five Books of Moses and the Book of Joshua They do not accept the rabbinic Oral Law and have their own interpretations of Torah law. That makes their keeping of the Passover sacrifice fascinating, showing us how interpretations of the same verse can diverge greatly.

Every year the entire community gathers on Mount Gerizim – the Holon contingent keeps a house on Mount Gerizim for this purpose. On Passover eve, towards evening, they gather in the place where they do the sacrifice. This is not their holy place on Mount Gerizim, but a site in the center of the town. Because the Samaritans do not always have the same calendar as the Jews, sometimes their Passover is a month later than the Jewish Passover. When that happens, thousands of Israelis come to see the zevach, the sacrifice. Every household buys a one-year old lamb and brings it. They all wear white which symbolizes freedom for them. 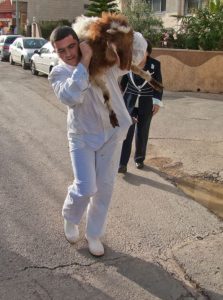 A lamb for every household (Wikipedia)

The high priest blesses the crowd and begins to read chapter twelve of Shmot which describes how to bring the sacrifice. When he reaches verse six and says ושחטו אותו, they shall slaughter him, that is the signal to begin. Fifty lambs are slaughtered all at once by the official butchers. A dot of blood is placed on every Samaritan’s forehead, symbolic of the blood the Israelites placed on the doorpost on the first Passover. The animals are skinned and the parts that will not be eaten are burned. Then the entire animal is placed on a wooden spit and lowered into deep pits that have enormous fires burning in them. The pits are covered with a metal grate that is then covered with wet cloth and mud, to not allow any air in. This makes the meat be cooked from the heat of the oven and not directly from the fire. 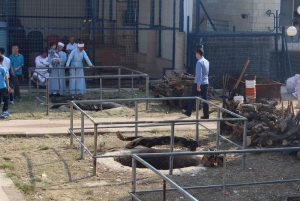 The pits where the sacrifices are roasted (Wikipedia)

After about two hours the meat is ready and every family eats their own animal, with matzot that they have prepared (they will not eat anything on Pesach that was not prepared by Samaritans) and the plants they accept as maror (see maror post). Anything left over is burnt up and not left for the next day. 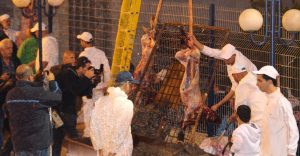 On the spit (Wikipedia)

How do these rules compare with what the Gemara tells us? Their timing is different – they sacrifice towards evening, except on Fridays, and not in the middle of the afternoon. There is no ritual sprinkling of the blood, only a symbolic placing of the blood on the forehead. The roasting on a spit is the same but the exegesis that the Gemara does on Pesachim 75, that the fire must be direct, is clearly not followed here. They eat על מצות ומרורים, with matza and maror, as the Torah commands. 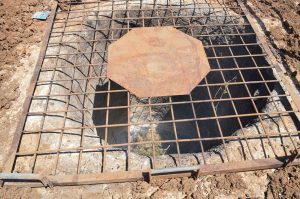 The Samaritan Passover sacrifice may not be identical to what happened in Temple days but it does help in imagining what the scene may have been like. We, who are so removed from the Temple and its rituals, can use that assistance.