When we reach the very end of Ketubot, in a string of stories about the greatness of the Land of Israel, we will encounter Rabbi Zeira as he enters the land. But of course he already appears in so many places in the Gemara, so let us talk about him now, since we hear an opinion from him on daf 97 of Ketubot.

Rabbi Zeira was a third generation amora who was fortunate enough to live and study in both the great centers of Torah of his time, in Babylonia and in Eretz Israel. His journey from one place to another was fraught with difficulties and challenge and many stories are told about him and how he overcame his troubles as the quintessential oleh chadash, new immigrant.

Rabbi Zeira studied at both of the yeshivot of Babylonia of his time, Sura and Pumbedita. His teachers were the heads of these schools, respectively, Rav Huna of Sura and Rav Yehuda of Pumbedita. Despite his privileged position as the student of these two giants, Rabbi Zeira yearned to study with the scholars of the Land of Israel. He would send messages with the rabbis who traveled back and forth, asking them to confirm certain things that he heard (Eruvin 80a). He also expressed the desire to sit and hear the Torah of the Land of Israel himself:

“Rabbi Zeira said: May it be God’s will that I merit to ascend to Eretz Yisrael, and that I learn this halakha from the mouth of its Master, Rabbi Elazar.” (Niddah 48a)

As much as Rabbi Zeira wanted to leave for the Land of Israel, he had one major obstacle in his path – his revered teacher Rav Yehuda. As strange as it may sound to us today, Rav Yehuda believed that the Jews of Babylonia were not allowed to leave and return to Israel since they had been sent into exile as a punishment from God and thus they needed to wait for Him to return them:

“As Rav Yehuda said: Anyone who ascends from Babylonia to Eretz Yisrael transgresses a positive commandment, as it is stated: “They shall be taken to Babylonia and there they shall remain until the day that I recall them, said the Lord” (Jeremiah 27:22).” (Shabbat 41a)

Most Orthodox Jews disagree with this idea today but it still exists and is the reasoning behind the anti-Zionist stance of the Satmar Hasidim.

Despite his teacher’s objections, Rabbi Zeira eventually made his way to Israel. His entry into the land was a precarious one. He had to cross over the Jordan River, something that was usually done with the aid of a ferry. However, no ferry was coming so Rabbi Zeira decided to make his own way across, with the help of a rope strung across the river, a primitive version of a zipline. We actually can see such a contraption in the Medva map picture of the Jordan, a church mosaic made a few centuries after Rabbi Zeira’s crossing: 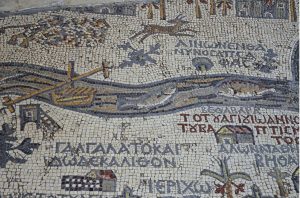 A Samaritan who sees Rabbi Zeira’s dangerous feat chastises him for being headstrong. Rabbi Zeira answers him:

“Rabbi Zeira said to him: This is a place where Moses and Aaron did not merit entering; who is to say that I will merit seeing this land?” (Ketubot 112a)

Once in the land, Rabbi Zeira’s travails continue. He is a greenhorn in every way – his accent, speech and clothes give him away as a Babylonian and he is mocked by others and made the butt of jokes:

Despite this bad treatment, Rabbi Zeira had no desire to return to Babylonia. He immersed himself in the Torah of the Land of Israel and even fasted so as to forget his Babylonian learning (Bava Metzia 85a). He claimed that the air of the land of Israel makes one more wise (Baba Batra 158b) and he went to study with the giants of the land: Rabbi Yochanan and Resh Lakish, Rabbi Ami and Rabbi Asi. Eventually he became such a patriot that he himself, a born and bred Babylonian, referred to other Babylonians as בבלאי טיפשאי, stupid Babylonians! (Betzah 16a)

Rabbi Zeira became so identified with the scholars of the land of Israel that his honorific is the one for Israel scholars and not Babylonian ones: Rabbi and not Rav. More poetically, when he died he was eulogized in a way that befit his growth in the two great Torah centers of his time: