Is Hebrew the only language of the Jewish people? Throughout history, Hebrew remained the language of prayer and study, as well as an effective means for Jews from different parts of the world to communicate with each other. However, it was certainly not the only language Jews spoke. This was true in the recent past, (and present!) with Yiddish and Ladino, English and Russian spoken by Jews worldwide. But it was clearly also true in ancient times. We can look at our tractate to get a sense of the linguistic complications of the past:

And later on in the Gemara:

“If one reads the Megilla in Coptic to Copts, in Ivrit to Ivrim, in Elamite to Elamites, or in Greek to Greeks, he has fulfilled his obligation” (Megillah 18a)

Besides Hebrew, there were certain languages, both in the land of Israel and in the Diaspora, that were in common use. The classic statement about what was spoken in Israel is from the Talmud Yerushalmi on our tractate:

“Rabbi Yonatan from Bet Guvrin said, four languages are appropriate that the world should use them, and they are these: Greek for song, Latin for war, Syriac (Aramiac) for elegies, Hebrew for speech.” (Yerushalmi Megillah 1:9)

Here we have not only four distinct languages but also a purpose for each one. This gives us a sense that Rabbi Yonatan of Bet Guvrin was not only familiar with these languages on the surface but understood their essence. How else would he know that Greek is most fitting for song and Latin for war? This is a sign of a multi-lingual reality, something that was obvious in Roman-controlled Eretz Yisrael. 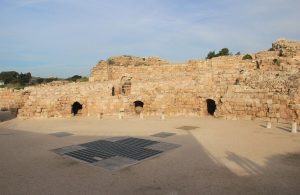 We have strong evidence of three of these languages in the landscape of Eretz Yisrael (Latin is a weak fourth runner, although we do have words that the rabbis borrowed from Latin). Aramaic was a common spoken language, both in Israel and in Babylonia, and indeed it appears all over the Gemara. We also have inscriptions, both on burial sarcophagi as well as donor plaques in synagogues, that are written in Aramaic. If you gave money or buried your loved one, you wanted to be sure that your inscription could be read by as many people as possible. Therefore you would write it in the common language. The same goes for Greek – we have dedication inscriptions and burial plaques written in Greek as well and it was clearly the lingua franca of the whole Roman empire. 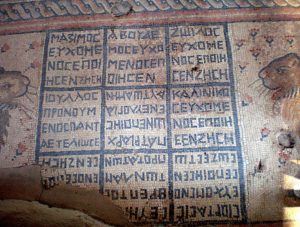 Greek seems to have had a special status, for good and bad, among the rabbis. Many terms (including the name for the rabbinic gathering par excellence, the Sanhedrin!) come from Greek and the rabbis were certainly familiar with the language. Greek was considered a beautiful language – יפת אלקים ליפת, God makes Yefet (the Hebrew name for Greece, but also meaning beauty) beautiful and it was even used, according to Rabbi Yishmael, in the Temple itself:

“In three baskets each of [the capacity of] three seahs they make the appropriation [of shekels] from the chamber. And on them was inscribed: Aleph, Beth, Gimmel. Rabbi Ishmael says: Greek was inscribed on them, alpha, beta, gamla.” (Mishnah Shekalim 3:2) 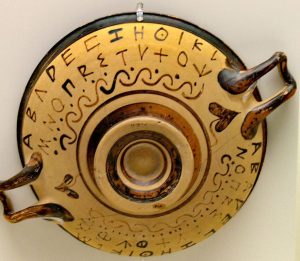 The commentaries explain that Greek letters were in the Temple because they were beautiful, they were well known (perhaps more than Hebrew?) and it could be that Greek was used more for commerce.

In the Roman Diaspora (i.e., not in Babylonia) Greek was even more common. We have evidence from various sources that the Jews of Alexandria barely knew Hebrew and Greek was their main language. This may be part of the reason for Ptolemy’s famous request to translate the Torah into Greek, so that the local Jews could understand it.

Greek as a spoken and written language, for business and politics, seems logical. But what about using Greek for ritual purposes? Rabban Shimon ben Gamliel, as well as Rav and Shmuel, take that step:

“Rabban Shimon ben Gamliel says: Even for books of the Bible, the Sages did not permit them to be written in any foreign language other than Greek” (Megillah 18a)

Greek was widespread enough and prestigious enough that Rabban Shimon ben Gamliel saw it as a legitimate language in which to read and write the Megillah and even the Torah. Perhaps this is also connected to the fact that Rabban Shimon was a patriarch and grew up in a household where Greek was common. The illustrious rabbinic families had to know Greek in order to communicate with foreign powers. Rabbi Judah the Prince felt that Aramaic was unacceptable while Greek was perfectly fine (Bava Kama 83a). If you must speak a language other than Hebrew, Greek is a much better choice.

Was there pushback against this attitude? Certainly, the rabbis wanted to encourage Hebrew as much as possible. In fact, Rebbe’s statement about Greek versus Aramaic may have been intended to do just that – leave Greek for your business and political dealings but speak Hebrew at all other times. Forget about that inferior Aramaic. This rule was clearly followed in Rebbe’s household, to the extent that his maid spoke better Hebrew than the rabbis who came to visit. (Megillah 18b)

But even the exalted language of Greek was censured at various times. In times of trouble with the Roman empire, there were attempts to outlaw Greek – during the Great Revolt and the Trajan Revolt among others. However, these bans seem to be tied up with the study of Greek wisdom, i.e., Aristotelian philosophy and other ideas that the rabbis felt were incompatible with Torah. It was not purely a linguistic issue.  In any case, the bans, both on language and wisdom, were ineffective. Greek and Aramaic flourished, although Hebrew managed to survive as well.

In today’s world, where almost every Jewish text has been translated to English and English language signs appear all over Israel, we might despair over the state of the Hebrew language. But Eliezer Ben Yehuda, reviver of the Hebrew language in modern times, had his birthday last week and it was celebrated as the National Day of the Hebrew Language. New Hebrew words, Hebrew songs, literature and journalism are flourishing. Don’t write any eulogies for Hebrew. Despite its many competitors, then and now, it is still going strong! 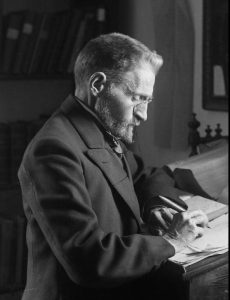