I’m Getting Married in the Morning

In the context of a conversation about when a young bride can refuse to marry the man chosen for her by her mother and brother, we hear about a dramatic refusal, something similar to those movies where the bride runs away at the altar:

“Rabbi Yehuda said more than that: Even if she is sitting in a bridal chair [apiryon] going from her father’s house to her husband’s house and said along the way: I do not want so-and-so as my husband, this constitutes a refusal.” (Yevamot 108a)

The bride is being conveyed to her future husband’s home, enjoying the excitement of the wedding party. Decked out in finery and in a ceremonial conveyance, she certainly looks like she wants to get married.  But if she says she does not want to marry him, her words count more than her actions and we accept her refusal.

The law is clear, but what exactly is happening – what is an apiryon אפיריון and how does it fit into the wedding ceremony?

We first hear of an apiryon in the Song of Songs in the Bible:

“King Solomon made him an apiryon of wood from Lebanon. “(Song of Songs3:9)

This is a hapax legomenon, a fancy term for when a word appears only once in the Bible. Since we have no other instances of this word, we need to rely on context to understand it. The verses here are speaking of a wedding (the last verse will come up later in our discussion of crowns for a groom) so it seems to be something connected to the king’s nuptials. Scholars have tried to understand the etymology of the word. Some connect it to the Greek phoreion, others to the Sanskrit paryanka. Both words mean a conveyance that is used to carry an honored person – a palanquin or litter. 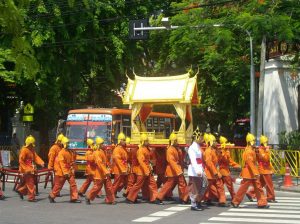 This imagery, of a chair carried by bearers, can also be used if the Song of Songs is interpreted allegorically, as it often was, as a love song between Israel and God. In the allegory, the litter would be the Ark of the Covenant, carried by the Levites, and the Torah would be “betrothed” to the Jewish people.

The word apiryon appears in Rabbinic literature, mostly in the same context of marriage but with some exceptions. In Mechilta deRabbi Yishmael (Mishpatim 1) we have a rule that a Hebrew slave cannot be asked to do degrading things for his master. Among these labors is having to carry him in a chair, a phoreion or a lectaka, the latter two being the Greek and Roman words respectively for a litter.

Here in Yevamot our apiryon is clearly part of the joyous marriage procession from the bride’s house to the groom’s house, a very significant part of the marriage celebration in ancient times. The Gemara uses this image beautifully, if anachronistically, in describing how Amram and Yocheved, Moses’ parents, reunited:

“Rav Yehuda bar Zevina says: He performed an act of marriage. He sat her on a palanquin [apiryon], and Aaron and Miriam danced before her, and the ministering angels said: “A joyful mother of children” (Psalms 113:9).” (Sotah 12a)

This lovely description offers us a glimpse into wedding ceremonies in ancient Israel. It was so filled with happiness that the rabbis thought that perhaps it was inappropriate in our post-Temple world:

The list of decrees at the end of Mishnah Sotah is very helpful in showing us what was done to celebrate, as the rabbis weighed getting rid of some of those things in the sorrow of a destroyed Temple. They connected the Temple and the priests to the happiness of a Jewish wedding, something we still do today, when we break a glass at the height of the joy of the marriage ceremony.

Besides the procession, we also know that both brides and grooms had special decorations on their wedding day. These too were legislated against by the rabbis after various wars:

What crowns did grooms and brides wear? Crowns were and are a traditional part of a wedding ceremony. In ancient Greece (as well as in today’s Greek Orthodox church) a bride wore a crown called a stephane. There are examples of such a crown in statues and coins. 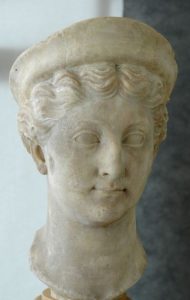 Although it may have been made of metal, Plutarch says it should be made from asparagus, a plant that has thorns but is sweet. This teaches the husband that even if his wife might seem prickly she will be all sweetness to him!

King Solomon in the Song of Songs provides us with a source about crowns for grooms:

“O maidens of Zion, go forth and gaze upon King Solomon
Wearing the crown עטרה that his mother gave him on his wedding day, On his day of bliss.” (Song of Songs 3:11)

What was this crown made of? The Gemara (Sotah 49b and in variations in the Yerushalmi and the Tosefta) discusses the crowns of the groom. They refer to crowns made of precious metals, of minerals and of plants – olive and myrtle branches, or reeds. Rashi provides an intriguing description of a crown made of salt. He says it was like clear crystal and you could draw designs on it.

The crowns of brides are easier to imagine. A bride would wear what is called a city of gold עיר של זהב. This diadem or tiara seems to have been a skyline of the city of Jerusalem, an idea immortalized by Naomi Shemer in her famous song Jerusalem of Gold. Such a tiara was also worn in the non-Jewish world, with different cities depicted on it. The goddess Tyche, guardian of cities, was often shown with such a crown: 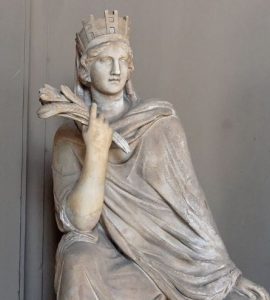 If we were to travel back in time to a wedding in ancient Judea, we might not recognize the outfits or the accessories but the joy and the emotions would be the same as our weddings today. May we have many more weddings and happy marriages! 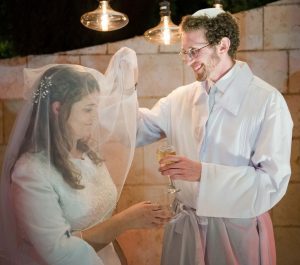