One of the elements that made Sukkot such a joyous holiday in Temple times was the ceremony of the water drawing and the subsequent celebrations surrounding it. As we discussed last week with the arava, water and the prayers for water are a central theme of Sukkot, as we leave the summer behind and enter the (hopefully) rainy season. Every day of the holiday water was brought to the Temple and poured into two basins that drained onto the altar. The Gemara in Sukkah 48 explains that the water came from the Shiloach pool. What do we know about the Shiloach?

The Shiloach, or Siloam pool in English, is at the southern end of the city, in what we today call the City of David. It sits at the meeting point of two major valleys that surround the oldest part of Jerusalem, the Kidron and the Central Valley (also known as the Tyropeon). The water of the Shiloach was used not just for this ritual of water libation but also for the water that was mixed with the ashes of the red heifer, to create the מי חטאת, the purifying waters that would be used to get rid of impurity from death. So this water is definitely significant. Its name indicates however that it is not an original water source. It is called שילוח, i.e., sent – the water has been sent from somewhere else. In the same way, irrigation is called שלחין, sent out into the fields. Where is the Shiloach water coming from? 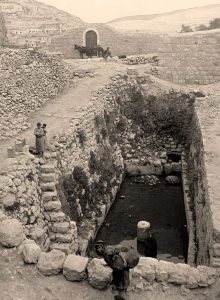 The source of the Shiloach is a karstic spring that in ancient times was the only water source for Jerusalem (besides rain and a small spring called Ein Rogel). This spring is known as the Gihon, also a name that explains something about it – it is מגיח, bursting forth at certain times and dormant at others. The name Gihon appears in the book of Bereshit as one of the rivers that issued out of the Garden of Eden. While some commentaries, notably the Ibn Ezra, claim that this is our very own Jerusalem spring, most say it is just the same name used for both a mighty river and a small spring. 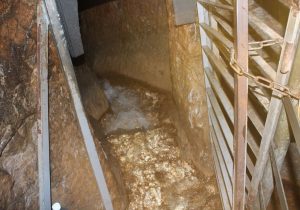 The Gihon is a significant place in First Temple times. When King David instructs Natan the prophet to anoint his son Solomon as the next king, he tells him to have him taken and anointed above the Gihon (Kings I 1:33-34). Water is a symbol of continuity and life and so is a good place to anoint the next king. The Gihon served as the main water source throughout most of First Temple times and it was accessed by an incredible tunnel and tower system built centuries earlier by the Jebusites. But in the seventh century BCE King Hezekiah of Judah was faced with two challenges. His city had expanded to the western hill (what we call today the Jewish Quarter) and he was expecting the Assyrian army to besiege him at any moment. He needed his water moved closer to the new suburbs and further from the invaders. Both problems were solved by diverting the Gihon water into an underground tunnel that emerged a few hundred meters away, into what we today call the Shiloach pool. The sourcewaters of the Gihon were covered up and the Shiloach became the water source that Jerusalemites knew about and used. The Gihon became forgotten. 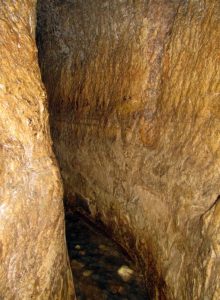 The rabbis knew about this water diversion and referred to it in the Gemara on a few occasions. In Pesachim 56 the Gemara explains that Hezekiah did six things, three of them the rabbis were pleased with and three they disapproved of. One of the actions that was not approved was “sealing the waters of the upper Gihon,” i.e., moving the water from the spring to the pool. While the Gemara does not explain the problem with this, Rashi offers that Hezekiah should have trusted in God and not taken such drastic action. Other commentaries note that by doing so Hezekiah harmed the residents who lived near the spring. (Interestingly enough, a variation on this Gemara in Avot deRabbi Natan (2:4) lists diverting the Gihon as one of the good things Hezekiah did.)

Whether it was good or bad, Hezekiah’s actions changed the water situation in the city forever. From his time, water was gotten from the pool and not directly from the spring. We have a fascinating archaeological testimony to the tunnel that Hezekiah dug to move the water. In 1880 a boy was playing down in the tunnel, not far from the exit to the pool. He came upon an inscription carved in stone. It was examined by Conrad Schick, one of Jerusalem’s leading archaeologists of the time, and eventually it was removed and brought to Istanbul, where it still is today. The inscription, written in the ancient Hebrew letters, tells the story of the tunneling. It is astounding:

the axes were against each other and while three cubits were left to (cut?) … the voice of a man …

called to his counterpart, (for) there was ZADA [a crack?] in the rock, on the right … and on the day of the

tunnel (being finished) the stonecutters struck each man towards his counterpart, ax against ax and flowed

cubits was the height over the head of the stonecutters .. 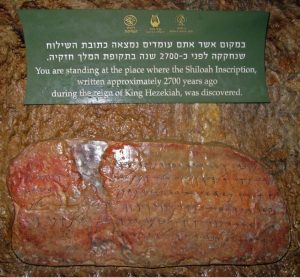 Two elements emerge from this inscription. One is that the tunnel was dug from two directions with the diggers meeting in the middle. Presumably they were following an existing crack in the rock. The other is that there is no name signed here – not the king or the cabinet minister or even the foreman of the work crew. This leads us to believe that the inscription was written by an ordinary worker, someone who took this dangerous, presumably low-paying job. And yet, he knew how to read and write and had a sense of history!

The Shiloach pool of Second Temple times was covered up and only rediscovered about fifteen years ago, when there was a plumbing emergency in the City of David. Until then, the only pool visitors saw was the small Byzantine-era pool that was at the end of Hezekiah’s tunnel. But when the original pool was unearthed, it was large, rectangular and very impressive. From its structure, as well as from literature, we can reconstruct what it was used for. 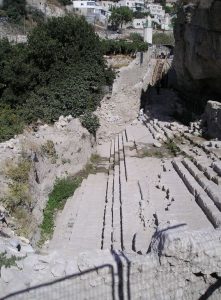 The Shiloach served a number of functions in Second Temple times. It was used for ritual purposes, as we have seen, but it was also a gathering place for pilgrims who arrived in Jerusalem. In fact, a major road has been unearthed right next to it that led up to the street below the Temple Mount. Its shape recalls the mikvaot found in other places and some suggest it was also used as a large mikveh for Temple visitors. And an intriguing story in the New Testament (John 9:7) seems to assume that like other pools in Roman times it was also used for healing purposes. As part of his healing of a blind man, Jesus sends him to bathe in the Shiloach.

Water source, pilgrim hub, purification mecca – the Shiloach was a major center in Second Temple Jerusalem and therefore a fitting choice to bring water to the Temple. 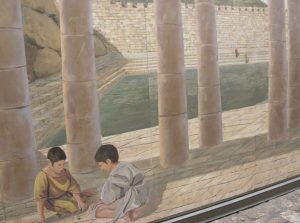