In the midst of the complex halachic dialogue on these pages of Yevamot, we get a suggestion by Levi about adding a sixteenth woman to the list of fifteen women forbidden to marry a yavam. The details of the case are complicated and we will not go into them here. But what stands out is Rabbi Yehudah HaNasi’s (AKA Rebbe) very sharp response to Levi’s suggestion:

“Rabbi Yehuda HaNasi said to him: [Judging by his question,] it seems to me that this Sage has no brain in his head” (Yevamot 9a)

The rabbis of the Gemara are hardly the most politically correct creatures. Their many and varied putdowns rival Shakespeare and Rodney Dangerfield. But Levi is not a nobody or an ignoramus and he has a long and significant relationship with Rebbe. To compound the insult, we hear it again in another halachic discussion in Menachot 81a, the same language exactly. What is the relationship between Levi and Rebbe and why is it so fraught?

Levi, or as he is known in the Yerushalmi, Levi ben Sisi, was one of the students that surrounded Rebbe. This generation of illustrious scholars included people like Rebbe’s sons, Shimon and Gamliel, as well as other teachers like Hanina, Efes and Bar Kapra. There are even two Babylonians who join Rebbe’s circle for a while, Rabbi Hiyya and his nephew Rav. These men are considered the דור המעבר, the transitional generation. They are the last of the Tannaim, the rabbis of the Mishnah, and the first of the Amoraim, the rabbis of the Gemara. As such, while they help Rebbe compile the Mishnah, what becomes the authoritative collection of laws and teachings that the Gemara will be based on, many of them also have their own collection of teachings, not all of which agree with the “official” Mishnah. We know that Rabbi Hiyya and Bar Kapra have their own “Mishnah,” as does Levi, and that is why he is poised to argue with Rebbe – he has a different tradition in his own compilation and he wants to retain it.

A depiction of the Mishnah in a stained glass window (Ilana Shkolnik, Wikipedia)

While these men are all students of Rebbe and look to him as the greatest of their generation, they are hardly shrinking violets. Each one is a giant in his own right and that is why Rebbe gathers them, teaches them and is challenged by them as he compiles his monumental work, the Mishnah. Not only does this group influence scholarship in the Land of Israel, but through Rabbi Hiyya and Rav and eventually Levi, they also help enhance the Torah study of that upstart, Babylonia.

Levi appears numerous times in the Gemara. He is described as one of the primary students of Rebbe למדין לפני חבמין: לוי מרבי (Sanhedrin 17b) and often brings Rebbe’s teachings as well as his own approach. He was also a righteous man who pleaded before God for rain. At some point in his adult life he became lame, whether as punishment for being too familiar with God (Taanit 25a) or because he attempted to show Rebbe an acrobatic bow and failed (Sukkah 53).

Rebbe had great faith in Levi’s abilities and sent him to be the rabbi of a town in the Galilee called Simonia. As the story is told in both the Yerushalmi (Yevamot) and in Bereshit Rabba, Rebbe assures the townspeople that he is sending them the best of the best. But when Levi arrives and sees the great honor that the town has for him, he gets stage fright and is tongue tied. He cannot answer questions that he should have known very well. The people of Simonia go to Rebbe to complain but Rebbe backs up his student – I sent you a man like me! When Rebbe quizzes Levi on what happened he understands that it was just a failure of nerve and that Levi really is capable of answering the questions put to him. 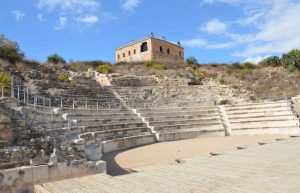 The theater at Zippori, Rebbe’s home at the end of his life (Carole Raddato, Wikipedia)

The connections between Levi and Rebbe from this story seem obvious. Rebbe is a supportive leader and Levi is a bright, if somewhat nervous, follower. So why the acrimony displayed in Yevamot? Despite the holiness of Rebbe and his students, there are also power plays at work in Rebbe’s court, among his students and between his students and his family, who are also students. A great story in Avoda Zara illustrates this. Rebbe finished teaching one book and asked to bring another. Levi suggested Proverbs, Shimon (Rebbe’s son) suggested Psalms. Shimon prevailed but Levi had the last word:

“When they arrived at the verse: “But his delight is in the Torah of the Lord,” Rabbi Yehuda HaNasi explained the verse and said: A person can learn Torah only from a place in the Torah that his heart desires. Levi said: My teacher, you have given us,[ i.e., me,] permission to rise” [and leave, as I wish to study Proverbs, not Psalms] (Avoda Zara 19a)

Levi is saying, you Shimon may be more influential with your father, but I am independent enough to choose to learn only what ”my heart desires.”

The power struggles reached their apex at Rebbe’s death. In the famous deathbed scene recorded in Ketubot 103, Rebbe appointed his two sons, Gamliel and Shimon, as Nasi and Hakham respectively, and Hanina as the head of the yeshiva. When Levi questions one of these appointments Shimon attacks him and mocks his disability. Meanwhile Hanina won’t take the position and gives it to Efes, who was older than him. Between all these power plays, Levi eventually left Rebbe’s circle and went down to Babylonia. He befriended Shmuel’s father and even studied with him in the ancient synagogue of Shef VeYativ in Nehardea (Megillah 29). Levi lived out his life in Nehardea and died there, although the traditional site of his grave is in Sasa, on the northern border of Israel. 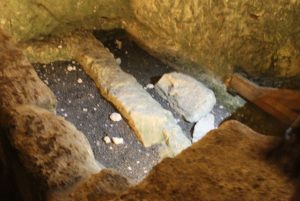 So is Levi cowed by his great surroundings and hounded into leaving? Or does he display an independence that brings him to teach Torah to a wider audience? I think the answer is the latter, based on Levi’s stubborn adherence to his own teachings. We see it here in Yevamot as well. After being insulted by Rebbe and given all of Rebbe’s proofs why his sixteenth woman should not be included in the list, בדקה לוי במתניתיה Levi kept his version of halacha in his compilation of Mishnayot. (Yevamot 10a)

Levi is a good example of the benefits and pitfalls of being part of something great. How do you follow and learn from those around and above you while still growing as an individual and retaining your independence? A question not only for Levi but for anyone lucky enough to be the student of a master teacher.