Rabbis on the Road

Our mishna discusses a situation where a teacher comes near your town and you want to go hear him on Shabbat, so you make an eiruv to go out in that direction. How real is this description:  how much did the rabbis really travel from place to place? 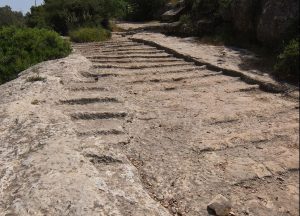 Piece of the Roman road between Jerusalem and Bet Givrin (Wikipedia)

In our time (well, up until six-months ago) the idea of the itinerant teacher is well known. Jetting off to conferences, Limmud, scholar in residence, etc is commonplace. (Today we are zooming off to places but in a very different way). But even in the days when travel was more complicated, lengthy and dangerous it was done regularly. We hear often about the teachers who traveled the route from Babylonia to the Land of Israel and vice versa, bringing Torah from one place to another. Who are our “frequent fliers” and for what purposes are they traveling? What were the road conditions?

There was a well known network of roads in ancient times, particularly in the Roman empire. Caravans traveled the more remote routes and people would try to join up with them so that there would be safety in numbers. The roads in the land of Israel are known from archaeological finds, particularly Roman milestones which advertised the emperor and his powers all along the route. 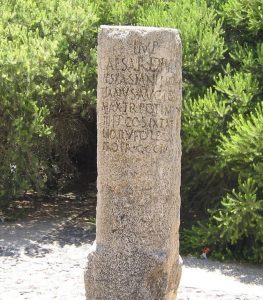 Even with well traveled roads however, there was danger. The Yerushalmi in Berahot discusses precautions rabbis would take if they traveled in a dangerous place: Rabbi Yehoshua said that you can recite shorter prayers if you are in a place of danger, Rabbi Shimon bar Abba said that the whole road is considered a place of danger.  Rabbi Yanni went the furthest – when he would leave on a trip he would prepare a get for his wife, in case he was killed and she was left an aguna!

If you overcame the obstacles and left on a journey, why did you go? The reason given in our mishna, traveling in order to teach, seems to have been a common occurrence. Many communities were small and isolated and did not have Torah scholars living in them. The rabbis felt responsible to visit these places and bring them some Torah. The hope was that they would be welcomed and fed, and people were encouraged to do so:

Yose ben Yoezer used to say: let thy house be a house of meeting for the Sages and sit in the very dust of their feet, and drink in their words with thirst. (Avot 1:4)

Just like today, some teachers were celebrities who attracted a large crowd while others were less popular. Rabbi Abbahu, a real “rock star rabbi,” describes the situation that occurred when he traveled with Rabbi Hiyya Bar Abba:

Another reason to travel was to study. Younger and less experienced rabbis traveled to learn from older and more knowledgeable scholars. Rabbi Hiyya came from Babylonia to study with Rabbi Judah the Prince and then sent his nephew Rav to do the same. Rabbi Abbahu, mentioned above, sent his son from Caesarea , a mixed city, to the Torah center of Tiberias to study (like leaving Los Angeles to spend the year in Jerusalem). When he heard that rather than studying he was engaged in doing good deeds, Rabbi Abbahu angrily sent him a note, asking him if there were no graves in Caesarea that he had to travel to Tiberias to do hessed! (Yerushalmi Hagigah 6:2)

Sometimes rabbis traveled to help the community. When the Romans decreed that the Jews could not declare a leap year in Israel (a way to take away their sovereignty), Rabbi Meir traveled to Asia Minor to make the leap year. He also went to Rome in order to free his sister in law from a brothel where she was imprisoned.  Rabbi Akiva and his colleagues traveled to Rome to intercede for the Jews with the authorities there. And Rabbi Yehoshua seems to have been in Rome numerous times, engaging in polemical discussions. According to one story he went to Athens to best the wise men of Athens in arguments (Bechorot 8b).

Finally, we have rabbis who traveled for the fun of it, just as people do today. The most famous of these tourists was Rabba Bar Bar Hana who traveled to far flung places and brought back many fantastic tales about huge beasts and other amazing sights. See the stories in Bava Batra 73-74 to get an idea, many of these have been interpreted allegorically. 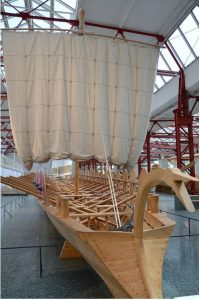 Replica of a Roman ship (Wikipedia)

May we all be able to travel again soon, for good reasons!