Welcome to Sukkah, another tractate that is great for the spatially minded and a little harder for the rest of us. Have no fear, dimensions and walls are only at the beginning of the masechet, after that we move on to simpler topics. Today I would like to take a look at a slightly strange phenomenon that we see at the beginning of Sukkah.

The tractate begins in a very logical and systematic manner, with the minimum and maximum height requirements for a Sukkah:

“MISHNA: A sukka that is more than twenty cubits high is unfit. Rabbi Yehuda deems it fit. A sukka that is not even ten handbreadths high, and one that does not have three walls, and one whose sunlight that passes through its roofing is greater than its shade are unfit.” (Sukkah 2a) 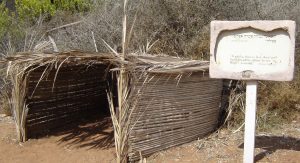 This introduction makes sense; how can we build something without knowing its dimensions? A few pages later the Gemara gets to the question of how do we know that the minimum height of a sukkah must be ten handbreadths (tefachim) and here the comparison is somewhat puzzling:

The Gemara then goes on to explain that God does not descend below ten tefachim to the earth and man cannot ascend ten tefachim into the sky. The ten creates a separate domain and that is how we know that a sukkah, to be considered a real dwelling, has to be the minimum size of that separate domain, i.e., ten tefachim.

Well, that is very nice but why do we care about the height of the Ark of the Covenant here? The Gemara chooses a very specific item as a way to explain this concept and that item comes from the Temple. Not only that. If you go to the parallel discussion at the beginning of Eruvin, where we learn about the maximum height of an alleyway, which is the same as the maximum height of a sukkah, the Gemara chooses a similar comparison:

“Rav Yehuda said that Rav said: The Rabbis only derived this halakha, (that an opening more than twenty cubits high is not considered an entrance), from the doorway of the Sanctuary,” (Eruvin 2a) 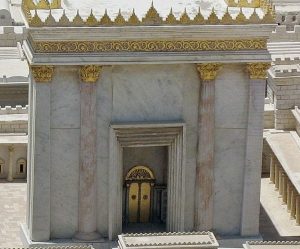 Entrance to the Sanctuary

Both the maximum and the minimum heights of a sukkah are taken from the sizes of items in the Temple. This seems strange. If I were building a house today I would not say to the builder, make the living room the size of the Holy of Holies. Why choose this particular comparison?

If we look at the openings of various tractates we see that there is a concerted effort to connect halachot with the Temple. This is true from the very beginning of the Gemara. Masechet Berachot begins with a discussion of when one may say Shema in the evenings:

“From when does one recite Shema in the evening? From the time when the priests enter to partake of their teruma.” (Berachot 2a)

Continuing on to Masechet Shabbat, the basis for the thirty-nine forbidden categories of work on Shabbat is the activities done to build the Tabernacle Pesachim and Yoma naturally are all about the Temple since they refer back to that time. The Gemara is suffused with the Temple.

If we stop to think about this for a moment, it is extraordinary. The Mishnah is only compiled over a century after the Temple is destroyed, the Gemara later than that. The laws may have been formulated earlier but to continue to emphasize their Temple connection in a world where no one can visit the Temple, and it is not part of daily life, is unusual. The Mishna and the Gemara deliberately choose to bring the world of the Temple into non-Temple halacha. We may live in a Temple-less reality but let us not forget about the importance of this holiest place. We need to create a mikdash me’at, a mini Sanctuary, not only in the synagogue but in our homes and actions as well.

This idea also ties in to another fascinating comparison on Sukkah 5b:

“Are measures a halakha transmitted to Moses from Sinai? They are written in the Torah, as it is written: “A land of wheat, and barley, and vines, and figs, and pomegranates, a land of olive oil and honey” (Deuteronomy 8:8), and Rav Ḥanin said: This entire verse is stated for the purpose of teaching measures with regard to different halakhot in the Torah.”

According to Rav Hanin, all halachic measurements – forbidden foods, impurity, etc, – are derived from the seven species that are special to the land of Israel. Again, we can ask – was this really the easiest and most convenient way to understand sizes and measurements? I think that this is an ideological claim as well. If halachic measaurements hark back to the seven species, they are always uppermost in people’s minds, emphasizing the primacy of the Land of Israel even when much of the nation are in the Diaspora. 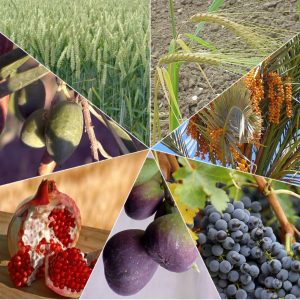 Noga HaReuveni, the revolutionary Israeli botanist who created the Biblical nature reserve of Neot Kedumim, connected these ideas of the special species and the Temple. He explained that these species are the only ones allowed to be brought as first fruits (bikkurim) to the Temple because they require special climate conditions to thrive. All of them, from barley in the spring to olives in the fall, have a critical growth period in the early spring. This is when weather in the Land of Israel is at its most erratic. Too much rain, not enough sun, too cold or hot and the whole crop will be ruined. When the farmer brings his pomegranates and figs he is acknowledging that God, not any idol, is in charge of everything in nature and it is to Him that he owes his gratitude.

But once the Temple was destroyed, how can we connect the land and the sacrifices to our homes? HaReuveni shows that we do this through our Shabbat table. The three major species: wheat, grapes and olives – appear on our table with the challah, the wine and the candles (lit with oil). In this way we create a mikdash me’at here as well, bringing both the Land of Israel and the Temple in Jerusalem into our homes every Friday night. 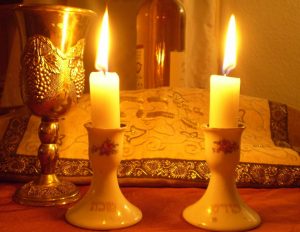