A controversy over how to bring the incense into the Holy of Holies opens a door into the world of Second Temple Judaism. The Mishnah on daf 18 explains that the high priest is sworn to follow the law as he was taught it. On daf 19 we hear the details: the priestly elders are concerned that the high priest will follow Sadducee practice. The Sadducees believed that the incense should be put on to the shovel with hot coals before entering the Holy of Holies, the rabbis on the other hand believed they should only be combined once the priest was inside the Holy of Holies. The Gemara then relates a story of a Sadducee priest who “got away with it,” as he boasted to his father, only to be divinely struck down.

Who are the Sadducees and what did they believe? Were they the majority of the priests and if so why did they have to follow the rabbis’ rules? And if the rabbis are not Sadducees, what are they?

The story of different sects among the Jews of Second Temple times is a well known one. With the incredible discovery of the Dead Sea Scrolls in caves in the Judean Desert over seventy years ago, the obscure world of Second Temple Judaism became slightly clearer. Suddenly we saw that different groups interpreted Torah law in different ways, and not everyone believed that the Temple was the ultimate holy place, but rather saw it as tainted by corrupt behavior. This was hinted at in Josephus, the New Testament and of course Rabbinic literature but portrayed to a much greater extent in the scrolls. 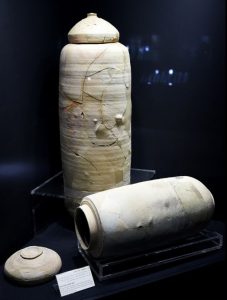 Jars that scrolls were found in (Wikipedia)

But the scrolls tend to be about one group who for simplicity’s sake we will identify with the Essenes. Josephus, in his Wars of the Jews tells us briefly about two others:

“the Pharisees are those who are esteemed most skillful in the exact explication of their laws. .  These ascribe all to fate [or providence], and to God, and yet allow, that to act what is right, or the contrary, is principally in the power of men; although fate does co-operate in every action. They say that all souls are incorruptible, but that the souls of good men only are removed into other bodies, but that the souls of bad men are subject to eternal punishment. But the Sadducees are those that compose the second order, and take away fate entirely, and suppose that God is not concerned in our doing or not doing what is evil; and they say, that to act what is good, or what is evil, is at men’s own choice, and that the one or the other belongs so to every one, that they may act as they please. They also take away the belief of the immortal duration of the soul, and the punishments and rewards in Hades.”

Josephus, writing for a primarily non-Jewish audience, emphasizes the philosophical differences between the groups – free will versus fate, belief in the afterlife and an immortal soul. But the rabbis go in a different direction. First and foremost, they do not explicitly define themselves as the Pharisees (פרושים) but they do agree with Pharisaic opinions. They are the winners in the story and winners do not need to define or name themselves. The Sadducees are rarely mentioned but when they are it is almost exclusively in the context of legal arguments and not philosophical ones. The only philosophical issue we hear about is that the Sadducees do not believe in the world to come (Avot deRabbi Natan chapter 5), similar to what Josephus tells us about them. Otherwise, we hear that they disagree with the Pharisees in certain aspects of the law: Temple ritual as seen here in Yoma, purity laws, and the calendar (see Mishnah Yadayim 4:6 for an example of purity disagreements). These are classic halachic disputes but they are also a way for a group to separate itself. Different calendars means holidays are celebrated at different times, different purity laws means one group will not eat with or marry the other. The Essenes also disagree on many of these laws, as we see in their texts. Interestingly, the name “Essenes” does not appear anywhere in Rabbinic literature.

When did Judaism go from being relatively monolithic to being so diverse? Scholars disagree about the exact reason why but the timing is generally agreed upon – sometime in the second century BCE, about the time of the Hasmonean revolt. Some tie the two together – the Hasmoneans according to the Essenes and perhaps the Sadducees, are illegitimate priests since they have been warriors, and are illegitimate kings since they do not come from the house of David. This lack of legitimacy causes a schism and different groups emerged. 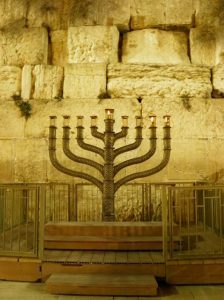 The Sadducees, or צדוקים in Hebrew get their name from the priest Tzadok, one of the two main priests in King David’s time. His partner, Eviatar, is sent home in disgrace to Anatot by King Solomon. Eviatar is from the house of Eli who are cursed by God and he also supported Adoniyah, Solomon’s rival for the throne. From then on, the house of Tzadok is considered to be the only true family for the high priesthood. By calling themselves Tzadokim the Sadducees emphasize their legitimacy and downgrade everyone else. The Essenes also sometimes call themselves Bnei Tzadok, the sons of Tzadok.

So if the Sadducees see themselves as the legitimate heirs to the high priesthood, why must they follow the halachot of the rabbis, presumably Pharisee halacha? It seems that while many high priests were Sadducees, the way the Temple was run was controlled by the Pharisees, who had more power and a stronger following. In general, it seems that the Pharisees were the group that appealed to the masses while the Sadducees were wealthier and more elite. If the main priestly families in Jerusalem were Sadducees, then archaeology definitely shows us their wealth. The mansions in the Herodion Quarter were only for the truly rich and were clearly for priestly families, as they have many mikvaot and are very close to the Temple Mount. 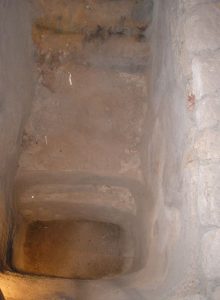 A mikveh in one of the Herodion Quarter mansions (Wikipedia)

The Temple was a focus of sectarian disputes and when the Temple is destroyed the sects disappear and a single Rabbinic/Pharisaic Judaism emerges. If the integrity of the Temple service is so important, we can understand the approach of each group – the Pharisees and the Sadducees each want to perform the service in the way they deem correct. The Essenes on the other hand see the Temple and priests as hopelessly corrupt and escape to the desert, abandoning Temple worship to the other groups.