Flax water – a new beauty treatment? Hardly. The Gemara on Nedarim daf 80b discusses if a husband can nullify his wife’s vow to bathe in מי משרה, literally soaking water. The conclusion is that he may nullify the vow since this water will make her disgusting to him. What is flax, why is it soaked and what’s so bad about the water?

Flax is a plant that was domesticated millennia ago. It has a number of uses: its seeds can be eaten, oil, called linseed oil, can be produced from it, but most importantly, it can be made into a textile. This textile, called linen, was and still is highly sought after. People figured out how to make it thirty thousand years ago in Georgia in southern Europe. Linen became one of Egypt’s primary exports and Egyptian priests wore linen since it was considered to be a pure fabric. The Torah also mentions linen. It is one of the elements of the forbidden combo called shatnez, the other being wool. The clothes of the Temple priests were made of linen as were the wicks for the Temple menorah. The virtuous wife in Eshet Hayil also buys linen: 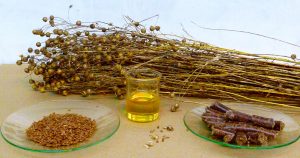 How is linen made? Flax grows in stalks and is then cut. Bundles of flax look like blonde hair, hence the term “flaxen hair.” After harvesting, the flax is dried and then must go through a process called retting. Here is where our soaking water comes in. The stalks must be soaked, preferably in stagnant water, for a few weeks. This causes them to expand, as well as bringing about the decay of the inner stalk, making it easier to separate the stalks from the fibers. Plants decaying in stagnant water for a few weeks? The smell must be pretty bad and the thought of bathing in such water is repulsive. We can well understand the husband wanting his wife to avoid such a process.

Was linen manufactured in the land of Israel? Definitely. We have at least two interesting clues about flax and linen, one from Biblical times and one from Talmudic times. In the beginning of the book of Joshua, two spies are sent into Jericho on a reconnaissance mission. They are discovered but fortunately they can hide at the house of a collaborator, Rachab who lives in the wall of the city. When she needs to hide them, she takes them up to her roof. There they can conceal themselves under the bundles of flax that she conveniently has drying on the flat surface of the roof:

“Now she had taken them up to the roof and hidden them under some stalks of flax (פשתי העץ) which she had lying on the roof.” (Joshua 2:6)

When she helps them leave the city, she lowers them with a rope from her window. Most likely the rope was made of flax fibers, strong and durable. Finally, the sign for her to save yourself and her family? Also a fiber:

“when we invade the country, you tie this length of crimson cord to the window through which you let us down. Bring your father, your mother, your brothers, and all your family together in your house;” (Joshua 2:18)

Zeev Ehrlich suggests that Rachab was a flax producer and seller and he ties the strands of her story together with the flax that seems to appear at every turn. 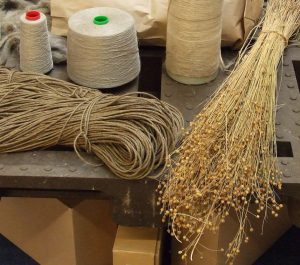 We come upon flax and linen in later times as well. In the Roman and Byzantine periods there was a community in the southern Golan, not far from the Kinneret. The site, which was in ruins for centuries, was called by the local Arabs Um el Kanatir, the mother of the arches. It was first explored in the nineteenth century by the traveler Lawrence Oliphant. He sketched the arches that he found over large pools, near a spring. The Jewish community, which existed until its destruction with the massive earthquake in 749 CE, built themselves a beautiful stone synagogue. It had fantastically detailed stone carvings as well as a very unusual piece of furniture, a heichalit. This is a raised platform for the Torah ark and it was also fabulously decorated. Today, thanks to a revolutionary use of technology, the synagogue has been restored to its original glory, using the stones that had been left scattered on the ground for 12 centuries. 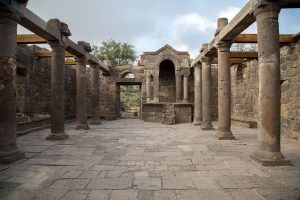 But where did a small agricultural community near the Kinneret get the money to build such an elaborate structure? The answer seems to be hidden in the pools. Although there once were conjectures that they may have been used for ritual purposes, today scholars are sure that this system of pools, pipes and utensils was used for a flourishing industry – turning flax into linen. The pools would be an ideal place for retting the flax stalks and they were far enough from the town that the smell was not offensive to the residents. Another suggestion is that the pools were used to whiten the fibers so that the linen would be pure white. In either case, this was the “industrial zone” of the town and it must have brought in a good amount of money. Linen, made well, was expensive and the townspeople could have sold it for a nice amount and used that money to build their monumental synagogue. 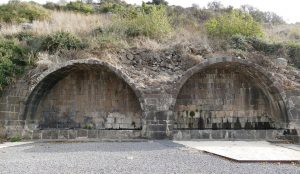 The arches and pools at Um el Kanatir (Wikipedia)

But did any women come to bathe in the smelly waters? Archaeology has not (yet) provided the answer to that question.