“Rami bar Ḥama said: They said that if one said to a scribe [lavlar]: Write a bill of divorce for my betrothed now, such that when I marry her I will divorce her it is a valid bill of divorce.” (Yevamot 52a)

A get (bill of divorce) is a document that must be written with precision and that is why even today, when we all know how to read and write, a get is written by a professional scribe. But what was the function of the scribe in ancient times?

A scribe, known as a sofer סופר in the language of the Bible and a lavlar לבלר in the language of the rabbis, was a very ancient profession. The word seems to derive from the Canaanite word for counting, safar, also used in Hebrew. It may also be connected to the Akkadian sapiru for secretary or official. Scribes were functionaries of the government, essential for keeping written records, writing up official documents and generally making sure administrations functioned as they should. Egyptian scribes had particularly hard jobs since they had to master not one but two hieroglyphic alphabets. Their job was usually passed down from father to son and they had great perks, including not paying taxes or serving in the army.  Thoth, god of writing, looked after them. 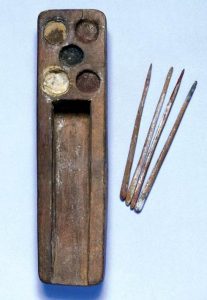 In the Bible we hear about certain prominent scribes. They were important functionaries of the king and had access to him like all the highest officials. The book of Jeremiah tells us about Gemaryahu ben Shaphan, scribe to King Yehoyakim. While Yehoyakim was an evil king who ignored the word of God, Gemaryahu and his dynasty were righteous. We received “regards” from Gemaryahu centuries later when his seal impression was discovered in the City of David excavations in the 1980s. 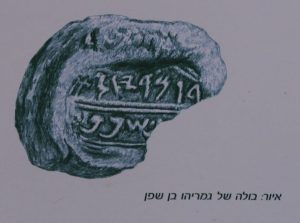 A drawing of the Gemaryah ben Shaphan seal impression (Wikipedia)

Not only kings used scribes, prophets did too. Jeremiah the prophet, persona non grata in the Judean court, had his scribe and protégé Barukh ben Neriyah write his prophecies and bring them to read in the Temple courtyard:

“So Jeremiah called Baruch son of Neriah; and Baruch wrote down in the scroll, at Jeremiah’s dictation, all the words which the LORD had spoken to him. Jeremiah instructed Baruch, “I am in hiding; I cannot go to the House of the LORD. But you go and read aloud the words of the LORD from the scroll which you wrote at my dictation, to all the people in the House of the LORD on a fast day; thus you will also be reading them to all the Judeans who come in from the towns.” (Jeremiah 36:4-6)

Perhaps the most famous Biblical scribe is Ezra. In his eponymous book, he is described, after a long lineage that traces his ancestry back to Aaron the priest as:

“Ezra came up from Babylon, a scribe expert in the Teaching of Moses which the LORD God of Israel had given,” (Ezra 7:6)

Here the meaning of a scribe seems to be more a scholar, as the Metzudat Zion explains. Indeed, we do not hear much about Ezra writing things but he is instrumental in keeping Torah knowledge alive by teaching the people.

In the time of the Gemara, we still have the word sofer סופר but now we have a new term as well, לבלר, lavlar, as we saw in our Gemara. A famous lavlar was Rabbi Meir, who seems to have been a scribe in the sense that we mean today: a copier of Torah scrolls. In a discussion in the Gemara in Eruvin about the type of ink he used, it is obvious that his profession involves (although perhaps is not exclusively) writing sifrei Torah:

A lavlar is a word derived from the Latin librarius, which itself comes from the word liber, or book. A librarius would write libelli or short official documents, a category that would certainly include a get. So while Rabbi Meir’s profession included writing holy texts, other lavlarim would have been more involved in drafting short and necessary documents like the get described in Yevamot.

Whatever his title, a scribe had to be very precise and exacting, particularly when copying a holy book. The precautions taken by scribes throughout the centuries  are the reason that our Torah scrolls have the (almost) exact same texts as scrolls written millennia ago, like the Dead Sea Scrolls.

Scribes also could be artists. There are phenomenally beautiful medieval manuscripts that are illuminated with great care and include illustrations or just elaborate lettering. 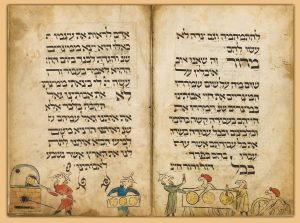 Copying books was incredibly time consuming and therefore a library was a truly prized and rare possession. In his famous ethical will to his children, the scholar and translator Judah Tibbon writes about taking care of one’s books:

“Look over your Hebrew books every month, your Arabic ones every two months, your bound books every three months. Keep your library in order, so that you wilt not need to search for a book. Prepare a list of the books on each shelf, and place each book on its proper shelf. Take care also of the loose, separate leaves in your books, because they contain exceedingly important things which I myself have collected and written down. Lose no writing and no letter which I leave thee. . . . Cover your book-shelves with beautiful curtains, protect them from water from the roof, from mice, and from all harm, because they are your best treasure.”

With the advent of the printing press in the 15th century, the role of the scribe began to change. He was no longer needed to copy books and as more people became literate he wasn’t really needed for document writing either. However, for Jews the scribe remained an essential person, needed to write mezuzot, tefillin and of course sacred books. He (and occasionally she) still fulfill this function today.

A beautiful image of the scribe as a link in the chain of tradition awaits those who visit the ancient synagogue at Masada. Here, in the place where the Zealots two millennia ago believed that they were the last Jews, sits a scribe, patiently writing a Torah scroll. Far from being the end of the line, he is a symbol of the power of tradition and continuity. 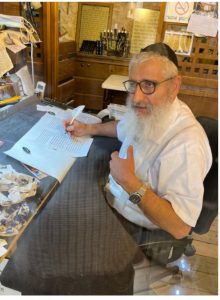