As Benjamin Franklin famously said, in this world nothing is certain except death and taxes. And, one might add, hatred of the tax collector. But does everyone’s dislike of paying taxes really mean that you can cheat on your taxes? Our Mishna on daf 27 seems to say so:

“MISHNA: One may take a vow to haragim, or to ḥaramin; or to tax collectors, that the produce in his possession is teruma although it is not teruma” (Nedarim 27b)

Unlike the common translation of haragim as murderers and haramim as robbers, Professor Zeev Safrai explains that all three categories are types of tax collectors. The Mishna seems to allow dissembling so as to pay less tax. The assumption is that the tax collector will respect the sanctity of teruma, tithed produce, and not take it for taxes. Therefore, to save more produce for yourself, you are allowed to lie about what is teruma.

The Gemara is naturally troubled by this idea:

The Gemara’s distinction allow us an insight into the world of tax collection in ancient times. The way taxes were collected in the Roman empire was through a tax farmer, also known as a publican. Contractors would submit bids on taxes for various regions, the highest bid, i.e., the one who promised to “farm” the most money from a region, would win. Any money (or produce) above that amount would go to the tax collector. The temptation to squeeze as much money as possible from the people was very great. This is what the Gemara means by a collector who has no fixed amount.

The rapacious appetite of the tax collectors was well known in the ancient world. In fact, excessive taxes were one of the causes of the Great Revolt of Judea against Rome in the first century CE. The rabbis depict this greed in striking terms:

Since tax farming inevitably led to greed, fraud and cruelty, tax collectors were assumed to be thieves and liars. The rabbis disqualified them from being witnesses:

“The collectors of taxes and the customs officials were not disqualified at first, as the Sages initially assumed they would take the set amount they were instructed to take. When they realized that these officials were taking more than that, they disqualified them.” (Sanhedrin 25b)

and would not accept their money for charity:

“One may not exchange larger coins for smaller ones from the trunk of customs collectors nor from the purse of tax collectors, and one may not take charity from them,” (Mishnah Bava Kama 10:1)

Tax collectors were assumed to be the worst of sinners. This is reflected not only in our sources but in the New Testament as well. The Gospels use the tax collector as the paradigmatic sinner, someone shunned by all except for Jesus:

Besides the greed of the tax collector, another problem was his affiliation with the evil empire of Rome. Paying taxes to Rome enabled their cruelty and their illegal colonization of Judea. In the well-known story about Rabbi Shimon bar Yohai and what have the Romans done for us lately, he references this exact point:

“Rabbi Shimon ben Yoḥai responded and said: Everything that they established, they established only for their own purposes. They established marketplaces, to place prostitutes in them; bathhouses, to pamper themselves; and bridges, to collect taxes from all who pass over them.” (Shabbat 33b)

Paying your taxes to the Roman tax collector, or the Jew appointed by him, not only left you much poorer, it made Rome much stronger. Paying taxes was tantamount to betraying the Jewish people. This provided another justification for tax evasion.

Coin connected to the Fiscus Judaicus, a Roman tax on Jews (Wikipedia)

However, this situation was different outside of the land of Israel. Here the authorities had the right (more or less) to rule over the Jews. In addition, sometimes Jews collected taxes for the Jewish community. In these situations not only were you not allowed to defraud the collector, you were required to pay him. This is the ruling that Maimonides gives in his Mishneh Torah:

“If, however, the customs-collector was appointed by the king to take a third, a fourth or any fixed amount of the subjects’ goods or their value, the customs collector appoints a Jew to collect this sum for the king, and it is known that this person is faithful and does not add anything beyond what the king decreed, this person is not considered a robber. For the law established by the king is binding law. Indeed, anyone who does not pay this tax transgresses, for he is taking what is due the king. This applies whether the king is Jewish or gentile.” (Hilchot Gezeilah 5:11)

Unfortunately tax evasion still exists in certain sectors of the Jewish community, both in Israel and abroad. However with the advent of the modern taxman, there seems to be no justification for not paying up. 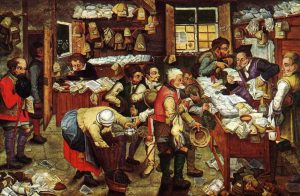