To Rav With Love

It is practically impossible to learn Gemara and not encounter Rav, the great Babylonian sage. He is often in the company of his colleague Shmuel, and they frequently differ both on matters of halacha and aggada. Rav is a ubiquitous presence in the Talmud. He appears on our daf giving an opinion on whether a child of a Gentile man/slave and a Jewish woman is considered a mamzer. Like many of his contemporaries and predecessors, he ruled that such a child is not a mamzer and is allowed to marry into the Jewish community. But then he is asked not just to walk the walk but to talk the talk:

Rav comes under fire for his refusal from his very own grandson, Shimi bar Hiyya, who sees Rav’s behavior as hypocritical. We will return to Rav’s refusal at the end of this article and try to explain it, but first let us understand who Rav is.

Rav’s real name was Rabbi Abba bar Ibo and his nickname was Abba Arikha, or Abba the tall guy. Rashi explains that he received the name Rav (rabbi) because he was the rabbinic authority for all of the Diaspora, an honorific similar to that of his teacher Rabbi Yehudah HaNasi who was known simply as Rebbe. Rav is part of the first generation of the Amoraim, the sages of the Gemara, but in terms of halachic authority he is considered a Tanna, like one of the Sages of the Mishna. This gives him higher status in an argument,

The dominant figure in Rav’s life was his double uncle, Rabbi Hiyya. What’s a double uncle? Your uncle from both sides! Rabbi Hiyya’s half brother from his father married his half sister from his mother and the child was Rav, so Rabbi Hiyya was Rav’s uncle twice. Rabbi Hiyya takes his young nephew with him when he leaves Babylonia to study in the Land of Israel with Rabbi Yehudah HaNasi and his court. Rav quickly distinguished himself in Rebbe’s house. Rabbi Yohanan reminisced about his brilliance:

At a certain point Rav decided to return to Babylonia, perhaps to marry. When Rabbi Hiyya asks Rebbe to give Rav authority to adjudicate cases, Rebbe only gives Rav partial semicha. Perhaps this is a way for Rebbe to show his reluctance at seeing such a prize student leave the Land of Israel.

Rav comes to Babylonia and arrives in Nehardea, a well known Torah center. He enters into conflict with both the rabbinic and the secular authorities there. The prominent rabbis of the city, Karna, Shmuel and Shmuel’s father; all cause him distress, despite his acknowledged mastery of the law. They may feel threatened by this young upstart freshly arrived from the Land of Israel and from the house of the great Nasi. Rav is appointed to the important position of agronomos, the supervisor of the markets, by the Exilarch, but he gets into trouble here as well.

With all these problems and conflicts in Nehardea, as well as a desire not to compete with Shmuel’s authority, Rav decides to leave the city and start anew somewhere else. He goes south, to a town called Sura. 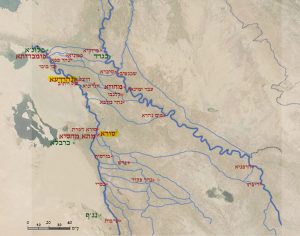 Sura and Nehardea in Babylonia (Wikipedia)

Here is where Rav comes into his greatness. As we see in a few stories in the Gemara, the south was largely populated by ignoramuses. Rav has to not only teach them Torah but undo their bad habits, as we see in this story:

“As when Rav arrived in Tatlefush, he heard a certain woman saying to another: How much milk does it require to cook a quarter weight of meat? Rav said: Evidently, these people are not learned enough in halakha to know that meat cooked in milk is prohibited. Rav tarried in that place, and prohibited even udders to them [so that they would not come to violate the prohibition of meat cooked in milk]” (Hullin 110)

As the Gemara there puts it: “Rav found an unguarded valley and fenced it in.” He needed to add safeguards to the law that more learned people would not require. In that way he could bring the level of Torah observance to what it should be.

But Rav is not satisfied with merely keeping the southerners from sin. He wants to develop a new location for Torah learning. He begins a new yeshiva that attracts students from all over Babylonia. In addition to his many regular students, he also has more temporary students who come to study during the special Kallah months twice a year. The yeshiva becomes so prominent that the Gemara in Megillah says this is the mikdash me’at, the small sanctuary, that Ezekiel said would be built in Babylonia. 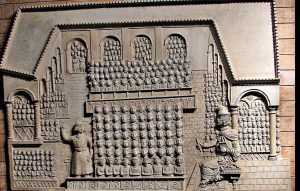 A depiction of teaching in Yeshivat Sura (Wikipedia)

Rav was so significant in matters of religious law that the Gemara in Bechorot (49) says that laws of what is permitted and what is forbidden always go according to Rav’s opinion (Shmuel on the other hand is followed for monetary laws and judgments). Rav is also prominent in many midrashic conversations, particularly with Shmuel, and he composed the Aleinu prayer among others. He respected the rights of women and refused to allow a father to betroth his daughter if she is not mature enough to agree to the match.

And what of our Gemara? Why was Rav so recalcitrant to agree to a marriage with the son of a Gentile father and a Jewish mother? Perhaps he was following his teacher Rebbe, who according to one opinion in the Gemara believed that such a child was a mamzer. Rav may have ruled otherwise for the people but was more stringent for himself and his family. Or perhaps he found something distasteful in this particular individual that had nothing to do with his lineage. The need to protect his daughter was greater than the need to show what the correct halacha was.

Rav may not have brought this suspect individual into his family but he worked tirelessly to bring Torah and mitzvot to Babylonia and for that he truly is, as Rashi says, רבן של כל בני הגולה, the teacher of everyone in the Diaspora.